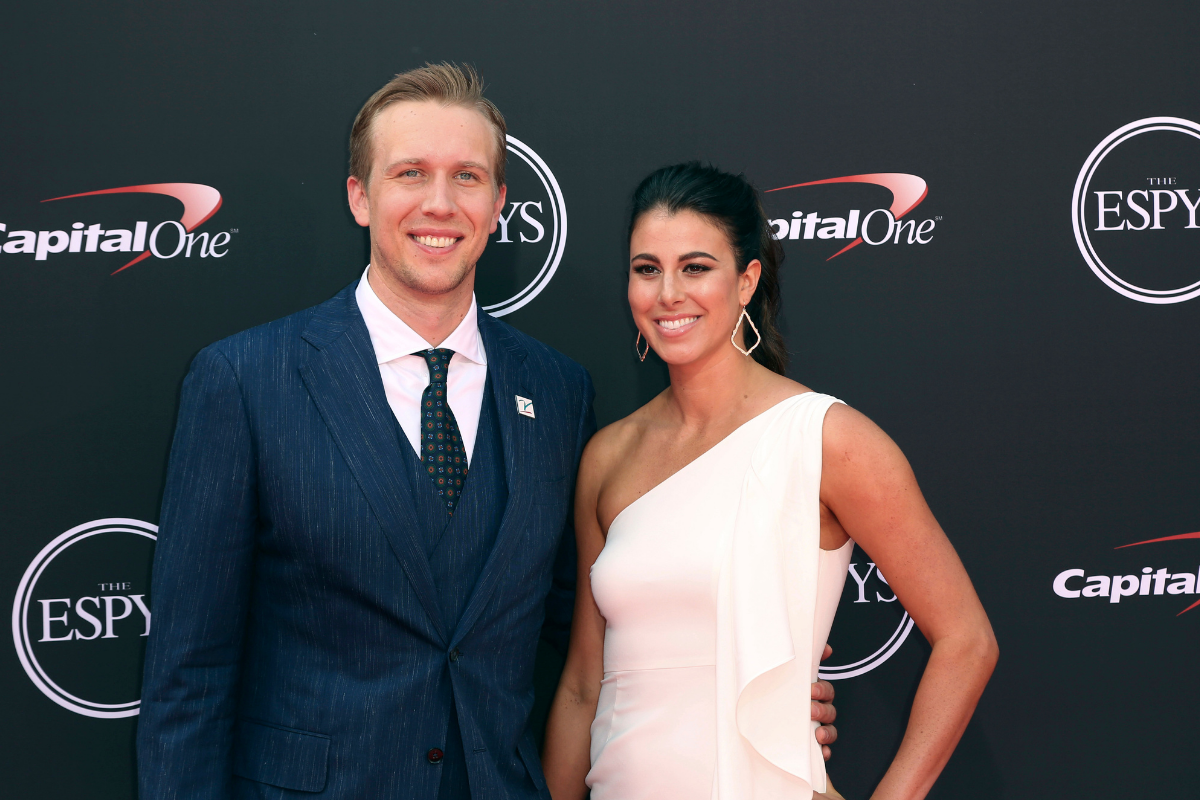 Nick Foles is not your average Super Bowl-winning quarterback. The 31-year-old was just a back-up when he rose to fame replacing Carson Wentz late in the 2017 season and leading the Philadelphia Eagles to the NFL playoffs and a win over Tom Brady‘s New England Patriots in Super Bowl LII.

Foles became a legend in Philly. Fans revered him. He delivered something not even Amazon Prime can. They gave him nicknames, like the hilarious one about his enormous, um, dong. After earning Super Bowl MVP honors, BDN signed a massive four-year, $88 million contract with the Jacksonville Jaguars in the 2019 offseason. He was out of Florida quickly, as he was traded to the Chicago Bears following an uninspiring first season last year.

Still, Nick Foles is a household name for what he’s accomplished. That means anything and everything he does off the field makes headlines. It also means his personal life — his wife and family included — is not so personal.

Nick Foles met Tori Moore when they were both in school at the University of Arizona. Nick played football and Tori played volleyball for the Wildcats.

The sporty couple didn’t officially become a couple until they graduated in 2011. Nick, however, had his eyes on her since the minute he saw her.

“I was going to my physical. I remember walking down the stairs and thinking, ‘Wow, this might be the most gorgeous person I’ve ever seen,'” he told the Press of Atlantic City.

Moore comes from an athletic family. Her brother, Evan Moore, played tight end for the Philadelphia Eagles and was a teammate of Nick’s when the Eagles drafted the quarterback in the third round of the 2012 NFL Draft.

Some call that coincidence, they might call it fate.

They Have Two Children

One magical (and crazy) month with our little Duke man! ? Thank you @nicoleoruephoto.

Tori posted a photo of the adorable, 9-pound baby Foles on Instagram to share the good news.

“What a true miracle and sweet surprise it is to meet our baby BOY! Lily has a new best friend and loves her baby bro so much. We feel incredibly blessed and are enjoying every second with our little man ?? #dukenathanfoles”

In addition their son, the pair also have a daughter together.

Tori gave birth to daughter Lily James Foles in 2017. Nick called that it the most amazing moment of his life, which sound about right for a first-time father.

Read below for full story. So thankful for this family right here and miss having them right down the street! Our weekend together was not quite as planned, but blessed by their presence and the help they provided us with an unexpected set of circumstances that nick and I suddenly found ourselves in. As several of you knew, we were about 15 weeks pregnant with our 2nd baby. Early Sunday morning after a rough couple days fighting a ?virus? of some sort, I went into sudden labor and knew something was wrong. Not long after we learned we had miscarried our baby boy. To fully labor and deliver and even see our baby boy was a pretty devastating process. Come to find that I had contracted an infection of pneumonia in the blood. The emotions go back and forth from immense and overwhelming sadness, confusion and anger to a firm belief that God has this fully in his hands and will use this for good. We cannot always understand or explain, but we know that is true. We?ve endured some unique challenges as a couple so far, but never quite knew what something like this felt like and now we do. We have so much compassion and sensitivity to those who have gone through a miscarriage at any point and in any circumstance. We know they all happen very differently. We are finally home from the hospital and recovering physically from the infection with antibiotics (already much better) as well as emotionally from this traumatic loss. This will take time. So many thanks to everyone who has reached out to us and who has been praying for us. Also a heartfelt thank you to Baptist Beaches hospital staff in maternity. What an incredible team of doctors and nurses that took care of us the last 4 days. ?? Thank you Taylor family for being here this weekend. We had a pretty fun weekend planned, and it was turned upside down, but God knew we needed you. ??

The Foles both went through heartbreak in 2019 when Tori suffered a miscarriage. She took to Instagram to detail the emotional time in her life.

When she was 15 weeks pregnant with their second child, she went into “sudden labor” and knew something wasn’t right.

?To fully labor and deliver and even see our baby boy was a pretty devastating process. Come to find that I had contracted an infection of pneumonia in the blood. The emotions go back and forth from immense and overwhelming sadness, confusion and anger to a firm belief that God has this fully in his hands and will use this for good. We cannot always understand or explain, but we know that is true.

?We?ve endured some unique challenges as a couple so far, but never quite knew what something like this felt like and now we do. We have so much compassion and sensitivity to those who have gone through a miscarriage at any point and in any circumstance. We know they all happen very differently,” she wrote on social media.

Tori recovered well, but the family had to deal with the traumatic loss of a family member.

Nick missed team activities and voluntary workouts when tragedy struck, but Jaguars head coach Doug Marrone stood by his quarterback at the time.

“He knows, like anything else, that we’re here for him,” Marrone told USA Today. “The football part, we’ll just figure that out. … My mind is on more so of what’s going on on the outside, making sure I’m doing the best job I can for the player.”

She Was Diagnosed With Lyme Disease in 2013

I frequently get asked if I take vitamins and supplements, how I know what to take, and if it helps me manage chronic Illness. After going back to school to get my certificate in health coaching, I learned a lot about this area of health and it has been key in helping me with my personal journey. I partnered with my functional medicine practitioner, Nicole James, to write a comprehensive post for those interested in supplementation. Nicole covers the reasons we cannot get enough nutrients from just our food and I cover how I learned what to take and the 5 basic supplements that everyone should be taking every single day. For those of you with POTS or chronic illness that are curious and reading, these are a huge part of my daily tactics to fight off the brutal symptoms that POTS can bring. I also provide some tools in my kit on hard days or days where I have big events that require me to be full functioning. Hope you all find this to be helpful! LINK IN BIO. #vitamins #supplements #pots #lyme #healingaswego

After graduating from Arizona, Tori worked in digital marketing for Nike out in Portland, Oregon. She was forced to quit her job when she was diagnosed with Postural Orthostatic Tachycardia Syndrome (POTS) and later diagnosed with Lyme Disease.

“For me, this illness has been a journey of faith, hope, and trust in the process that God has set out for me,” she explained. “Through my writing, I hope to be able to give some perspective on how to view difficult situations and help inspire people to find purpose in what they are going through,” she wrote in a blog post for The Increase Women.

Nick and Tori Are Charitable People

Nick and Tori may be quite the power couple in NFL circles, but they don’t let the fame or money affect who they are.

They have done a lot for the Philadelphia community and abroad. The Foles Believe Foundation in 2020 alone announced nine grants to food banks across the country amid the coronavirus pandemic. He’s just one of many NFL athletes helping out communities affected by COVID-19.

Even in everyday interactions, the Foles seem like good people.

Former writer for The Ringer Tanya Hubbard described her encounter with them when she served them at a restaurant in Philly:

I worked at a restaurant named Buddakan in Philly. Nick and his gorgeous wife, Tori, sat in my section. They both treated me so kindly and were so interested in me and my life. They were very in love, and I overheard very sweet and kind words back and forth to each other all night. Long story short, Nick looks up at me and says, ?You have something, I can see it, follow your dreams.? Tori nodded in agreement. In that moment, I thought, WOW WHAT A GUY! WHAT A COUPLE. THAT?S SPECIAL. Also, they tipped me $200 on a $150 check. So, yeah, I?m all in on Nick Foles and I hope he throws for 400 yards Sunday.

Well, I think we can all agree to root for Nick Foles and his family. We should all strive to be like them.

This article was originally published on June 18, 2020, but has been updated.

MORE: Donald Trump Lost Out on $5.5 Billion By Not Buying The Dallas Cowboys