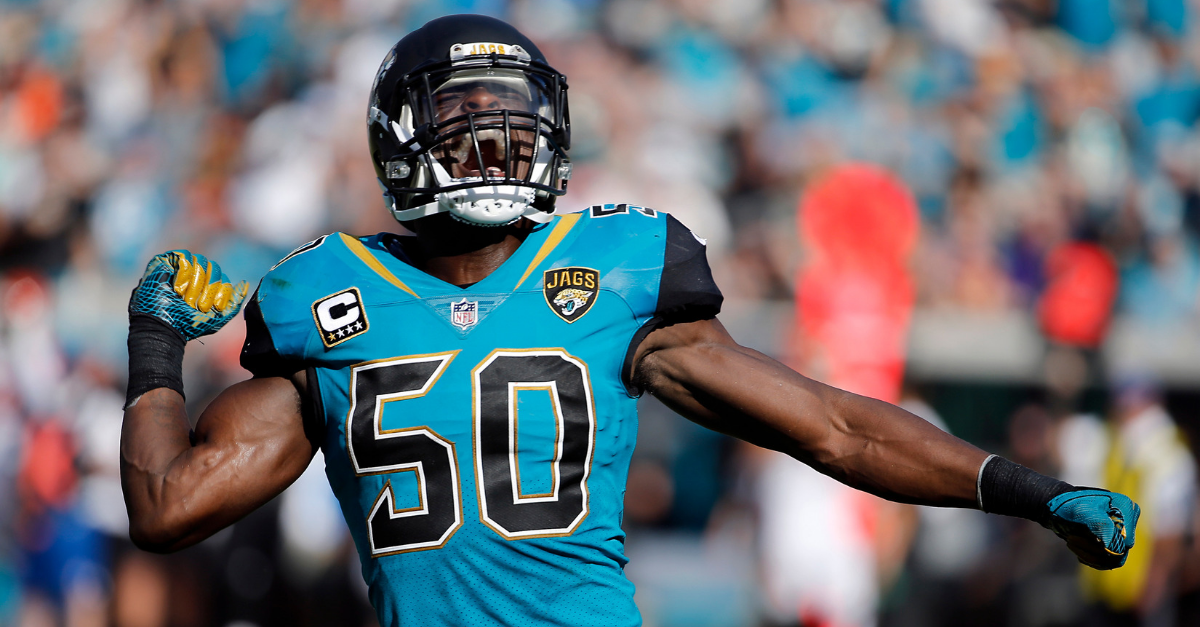 During a time where the longevity of a pro football player’s mind and body are questioned more than ever before, it’s no wonder star players, like former Detroit Lions wide receiver Calvin Johnson, are walking away from the game. When this happens, their bodies may have time to recover, but that usually means they’ll never return to form again. Remember what happened to Dez Bryant?

In what’s becoming an all-too-common occurrence, another NFL star is deciding to step away from the game. This time, however, Jacksonville Jaguars linebacker Telvin Smith is planning to sit out the entire 2019 NFL season, then return the following year.

In a post on his private Instagram account, the 2017 Pro Bowl and All-Pro selection announced he was leaving the game to focus on his health and family. It’s an understandable request by every stretch of the imagination, but it’s bold considering the poor track record of players who miss entire seasons, especially because the 29-year-old is in the prime of his career.

“It was said to me from a great coach, that in order for the man to be his best, he must get his world in order. At this time I must take time away from this game & get my world in order. I must give this time back to myself, my family, & my health. I appreciate all the support I will & will not get. I just ask that y’all respect my decision to not play football this season. I know the rumors of trade talk came about, but I started my career in Jacksonville & the day I do decided to call it quits it will be right here in Duval. I love y’all & even in my time off it’s #10toesdwn ya feel me!!! Love!”

A fifth-round pick (No. 144 overall) in the 2014 NFL Draft, Smith has been one of the most important players on Jacksonville’s vaunted defense the last few seasons, as the 215-pound linebacker has started 69 of 76 regular season games to begin his career.

Smith joins All-Pro linebackers Luke Kuechly and C.J. Mosley as the only NFL players with at least 500 tackles and nine interceptions since 2014. Smith’s 445 solo tackles (he has 586 total) are the most by any player since he entered the league.

During his time playing for Jimbo Fisher and the Florida State Seminoles, Smith was an All-ACC performer who won two ACC titles and the 2013 BCS National Championship as a teammate of Heisman Trophy-winning quarterback Jameis Winston.

One of only 13 players in NFL history to record 100+ tackles in each of their first 5 seasons.

Also the only player with at least:

in EACH of the last 3 seasons.

Only 15 other players have done that in even ONE of the last three seasons https://t.co/JCVu4dXbAS

Taking time off for one’s family and health should be respected. After all, it’s his body on the line out there week after week. What makes this decision curious is that Smith, who signed a four-year, $45 million extension with Jacksonville back in 2017, was targeted by Tom Coughlin, who is currently Jacksonville’s executive vice president of football operations.

Smith and All-Pro cornerback Jalen Ramsey were the only two Jags players who didn’t show up for the start of Jacksonville’s offseason workouts last month. Coughlin subtly took shots at them saying “championship teams are dominated by selfless individuals who recognize that the welfare of the team must always be paramount to any other consideration.”

In the offseason, Jacksonville signed former Green Bay linebacker Jake Ryan and drafted Murray State’s Quincy Williams ? the older brother of No. 3 overall pick Quinnen Williams ? in the third round of the 2019 NFL Draft. The team obviously knew something was up, but didn’t acknowledge any specific details in their first statement since the news broke.

I’m sure it’ll be a much-needed sabbatical for Smith, who was the subject of trade rumors during the offseason. Still, this decision comes with a ton of risk. It’s highly unlikely that the linebacker will somehow get better than he already was by taking a year off, and any chance at another monster extension is probably gone.

Good luck to Telvin Smith and his family, but something tells me he could be back in a Jacksonville uniform sooner than we think.