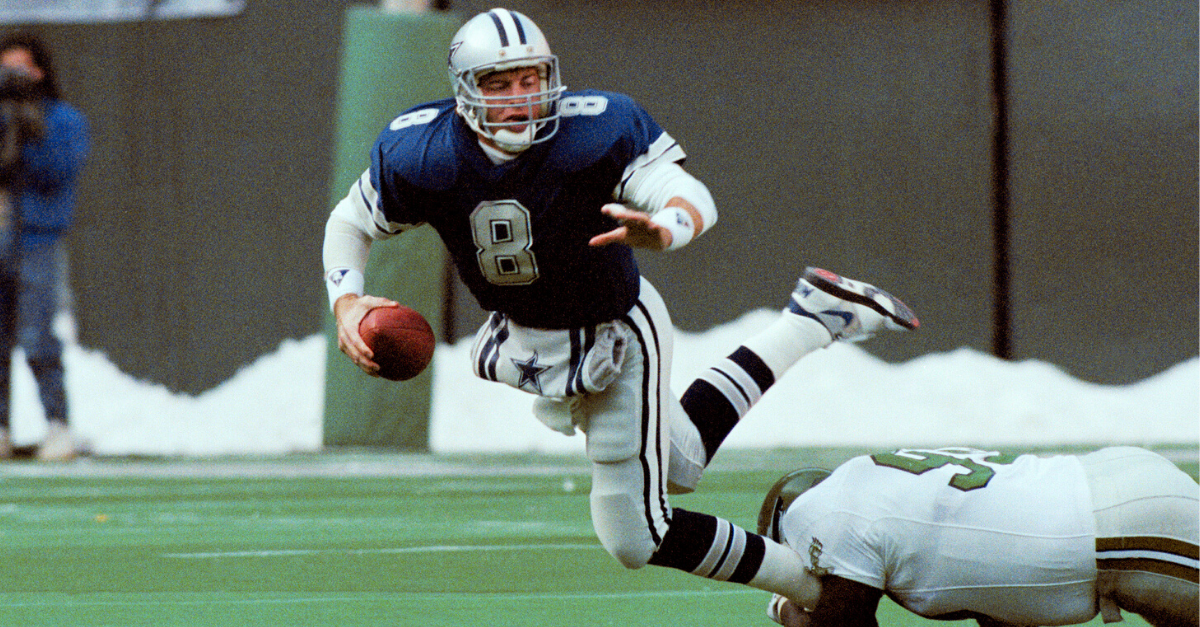 Everyone loves a great football rivalry. From the players to the fans and even the coaches, the records never matter. A game against the enemy always means war. In the NFL, perhaps nothing tops the clash between the Dallas Cowboys and Philadelphia Eagles, and it really took off over three decades ago.

Back in 1989, the two teams couldn?t have been more opposite. The Eagles, under head coach Buddy Ryan, were battling for a playoff spot, while the Cowboys were the league?s worst team under first-year coach Jimmy Johnson. Philly was the heavy favorite to win both games that season, and that?s exactly what happened, but the series is truly known for two words: Bounty Bowl.

The Thanksgiving Day game was ugly. The rematch two weeks later was even uglier. It is one of the biggest controversies in NFL history and a big reason why the rivalry is still heated today.

When the Philadelphia Eagles arrived at Texas Stadium for the Thanksgiving Day showdown on November 23, 1989, everyone knew who was going to win. The Eagles, built with a strong defense, had their eyes on the playoffs. The Cowboys, with a first-year head coach and rookie quarterback, were riding the struggle bus at 1-10.

You didn?t need to be a rocket scientist to know who was the better team in Irving that day, but there was a specific player who played a weird role and was essentially the X-factor in the series: Cowboys kicker Luis Zendejas.

Zendejas, who got his first shot at the NFL with the Cowboys two years prior, was on the Eagles roster to begin the 1989 season. He started the year strong, but a series of misses forced Philly to release him. Less than a week later, the Cowboys took him back to replace Roger Ruzek.

Why does the kicker?s history matter? Well, it sparked what fans know today as Bounty Bowl I.

On the opening kickoff, Eagles linebacker and special teams player Jessie Small leveled Zendejas, who started wobbling to the wrong sideline. Johnson claimed Ryan put a $200 bounty for the hit.

RELATED: ?Bountygate? Revealed the Darkest Side of Professional Football

Later in the first half, quarterback Troy Aikman was taken down by Eagles linebacker Britt Hager after the whistle, which ignited a fight in the end zone and an all-time call on CBS with John Madden and Pat Summerall. Johnson also claimed Philly put a $500 bounty on Aikman.

Needless to say, Johnson wasn?t happy during his postgame press conference after the Cowboys lost 27-0:

?They won the game. I congratulate them. They are a very, very talented team, the most talented team we?ve played so far this year. But I have absolutely no respect for the way they played the game. I would?ve said something to Buddy, but he wouldn?t stand long enough on the field long enough. He put his big, fat rear end into the dressing room.?

The Eagles head coach famously resented those comments, claiming ?I?ve been on a diet, I lost a couple of pounds. I thought I was looking good, and he goes and calls me fat.?

That Thanksgiving game is a big part of the Eagles-Cowboys rivalry. The Bounty Bowl was born. And wouldn?t you know, they played each other again two weeks later.

The Bounty Bowl. One of the many reasons the @dallascowboys hate the @Eagles. #SuperBowlWeek pic.twitter.com/1q7crBgt9i

On December 10, 1989, the Cowboys and Eagles met again at Veterans Stadium. And since the first matchup was a bit rocky, to put it mildly, National Football League commissioner Paul Tagliabue decided to attended. That didn?t stop much.

Both quarterbacks ? Troy Aikman and Randall Cunningham ? took a beating. Cowboys punter Mike Saxon took a big hit, which was flagged for unnecessary roughness. Eagles fans threw snowballs and beer onto the field; Even the CBS crew of Verne Lundquist and Terry Bradshaw were pelted.

The Eagles won again, 20-10, and made the playoffs that season, but lost in the NFC Wild Card game to the Los Angeles Rams. Buddy Ryan never won a playoff game.

As for the Cowboys, Jimmy Johnson, who replaced Tom Landry, led America?s Team to multiple NFC Championships and two Super Bowl victories in the 1990s.

During the Bounty Bowl, though, touchdowns and field goals didn?t matter. It was about pride. Both teams were ready to throw down at a moment?s notice. So were the fans.

MORE: Catholics vs. Convicts: How a T-Shirt Sparked the Heated Rivalry