Odell Beckham Jr. is the Biggest $95 Million Whiner in Sports 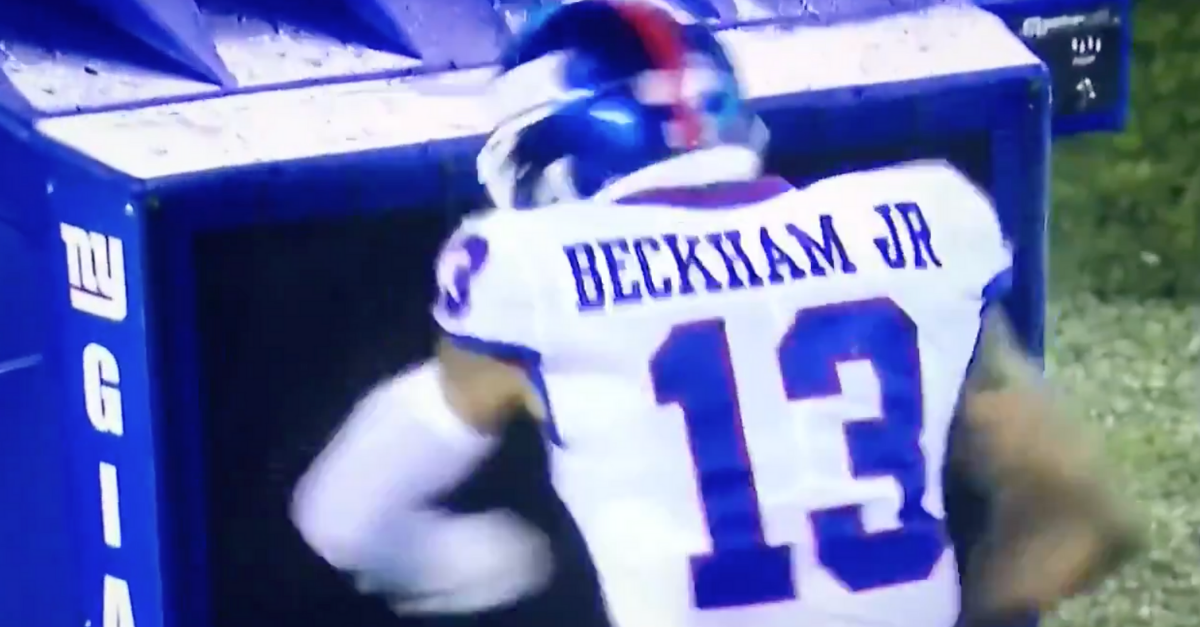 The NFL’s elite players prove time and again that they’re deserving of massive contracts and gaudy numbers in the stat column through on-field performance and off-the-field leadership. Well, most of the NFL’s upper echelon of talent is a leader on the sidelines that is.

The New York Giants are living their worst nightmare. The team is 1-5 after being dismantled on Thursday Night Football by their NFC East rival, the Philadelphia Eagles. Many people in New York are calling for a massive change somewhere, and one of them is their star wide receiver. Time and again, he’s called “passionate” for acting out, but it’s officially time to stop giving Odell Beckham Jr. a pass for his antics off of the football field.

After scoring their only touchdown of the game in the third quarter of Thursday’s game, Beckham was seen on the sideline attacking and throwing a head-butt into a giant cooling fan.

Let me say that again: Odell Beckham Jr. got into a fight with an inanimate object, again.

This is Odell Beckham Jr. right after the Giants scored their first touchdown of the night. He sure looks happy for Saquon Barkley. pic.twitter.com/GIQ0CQuiJH

Remember in 2016 when Odell attacked a kicking net, which then it spiraled into a strange love affair to keep the cameras on him?

The former LSU Tigers wide receiver caught 288 passes for 4,122 yards and 35 touchdown receptions, and parlayed one of the best starts in NFL history to a five-year extension worth up to $95 million with $65 million guaranteed.

Beckham is a phenomenal talent, and that’s not going to be debated. But all he’s doing is repurposing the old narrative of the diva wide receiver who is more about himself than the team.

This isn’t passion. This isn’t frustration he’s taking out in a sideline meltdown. This is theatrics, and Odell is the prima ballerina and star of the show.

In a candid interview with ESPN’s Josina Anderson, Odell blamed coaching and play calling decisions by coach Pat Shurmur, the schemes of opposing teams against him, his quarterback Eli Manning, and the Giants overall energy as a team for why they have underperformed through the early window of the season.

“I feel like I’m being out schemed and I also don’t have a chance to do something, or I gotta take a slant and go 60 [yards]. Not to say that’s not fun, but it’s like I want some easy touchdowns too. I watch everybody across the league, all the top receivers, get the ball the way that they should, and if they don’t they say something about it.” — Odell Beckham Jr.

Not only does Odell not mention any issues with his own game, he says it’s a “tough question” if he’s actually happy in playing in New York.

The Giants 2018 season is slipping away, and their biggest icon is sick and tired of being the star of a show everybody knows the ending to. Odell’s going to take every chance he can to make excuses public knowledge and add more fuel to this already out-of-control bonfire.