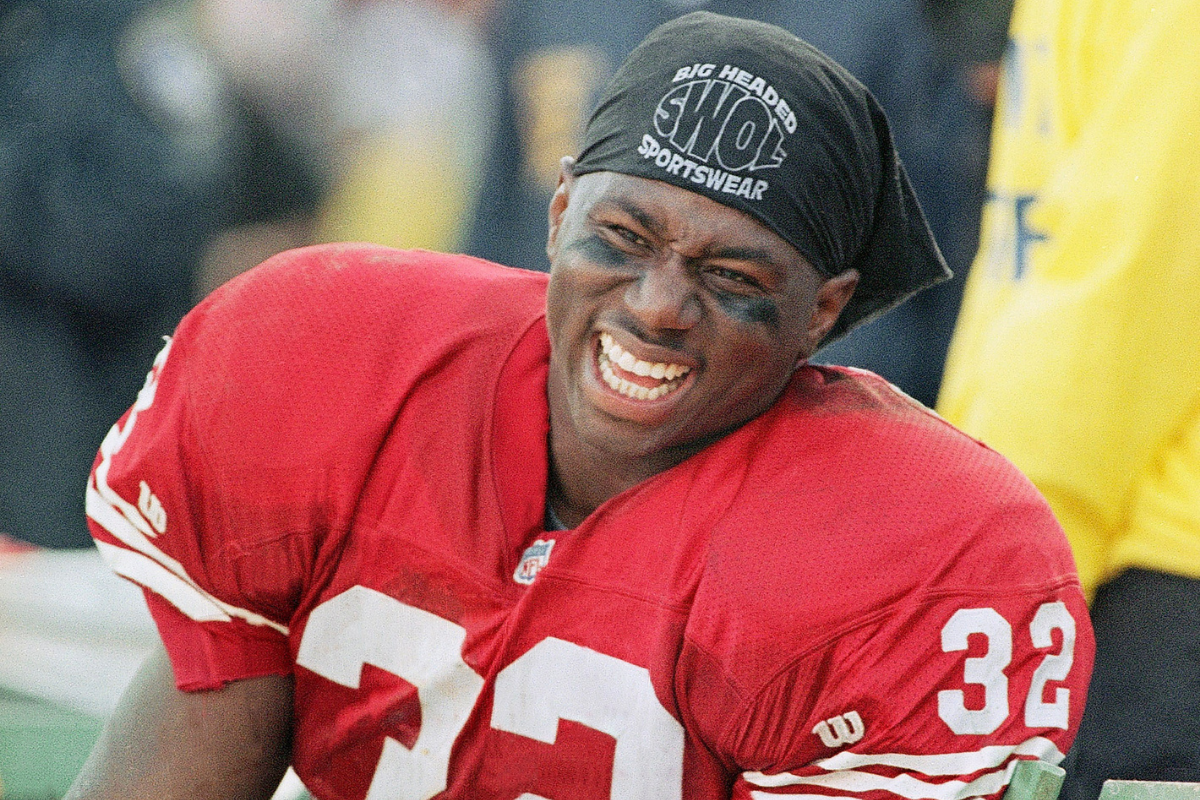 Chris Berman’s various monikers for athletes could make you groan. Still, he was certainly accurate when he coined the nickname Ricky “Running” Watters. What else would you call a running back who finished his NFL career with over 10,000 rushing yards and championships in college and the NFL?

According to Ricky Watters himself, though, his life had just begun when he retired. He’s continued his journey since leaving the National Football League and found plenty of happiness.

Happy birthday to one of the star dual-threat RBs of the 90s, @RickyWatters! pic.twitter.com/S2Zw2s3gGy

RELATED: What Happened to Jerome Bettis and Where is ?The Bus? Now?

He gained the attention of Lou Holtz, who was still pretty new to being the head coach of the University of Notre Dame. During the 1987 season, he was primarily a backup running back who saw little playing time.

In 1988, he was actually moved to wide receiver to try and fill the hole left by Heisman winner Tim Brown. Watters led the team in receptions and helped the Fighting Irish with the national championship.

Holtz moved Watters back to running back in 1989, and that’s the position he was drafted at by the San Francisco 49ers in the 1991 NFL Draft. Watters was taken in the second round (45th overall) and missed his entire rookie campaign with injuries. When he could finally take the field in 1992, he rushed for 1,013 yards and nine touchdowns.

While he was now a running back, Watters’ receiving skills did not leave him. In 1994, he may have only rushed for 877 yards and six TDs, but he also caught 66 passes for 719 yards and five TDs. This was enough to get the UPI to name him a second-team All-Pro.

That 1996 campaign was the best of Watters’ career for another reason. The 49ers made a run through the playoffs that ended at Super Bowl XXIX. Matching up with fellow California denizens the San Diego Chargers, Watters notched three touchdowns in the 49-26 victory for the Niners.

Ricky Watters is also the only player to score 5 TDs in a playoff game.

While he was overshadowed by Steve Young and Jerry Rice?all-time great football players?it was a performance to remember. Of course, the year prior, he set a record for rushing touchdowns in a playoff game with five against the New York Giants.

Watters left the Niners after winning his ring. He headed to the Philadelphia Eagles as a free agent. He was excellent for Philly, representing the NFC twice in the Pro Bowl and rushing for over 1,000 yards in all three seasons he spent in Eagles Green.

Many people remember him for an infamous quote after his first game with the team when he responded to a question about why he got alligator arms on a potential catch with, “For who? For what?” Of course, Philly sports fans are super understandable and didn’t take that to heart at all (that’s sarcasm).

The 52-year-old Watters has done quite a bit since retiring. He wrote a book, For Who For What: A Warrior’s Journey, and dipped his toes into the world of music.

The former NFL running back also worked as a motivational speaker focused on talking to adopted children. Watters himself was adopted, and he and his wife Catherina adopted a son, Shane. They also have a biological son together, Ricky Jr., who was born prematurely but pulled through. Sadly, Ricky and Catherina’s first child, Tigero, died after being born prematurely in 1999.

?A year and an hour apart,? Watters told SFGate.com of Tigero and Ricky Jr. ?Both were premature, and Ricky Jr. wasn?t even supposed to be born that day. It was such a tough thing to go through, and obviously, my wife was devastated.

?That shook me up and knocked me over. Life wasn?t about touchdowns and fancy cars and fancy suits. No, this is real life. I remember asking God, ?Please give me another chance,? and if he did, I?d give up anything to have Ricky Jr.”

Watters and his family lived in Orlando, Florida for a while, and he was a high school football coach in the area. However, since then, he and his family have moved back to the Bay Area, where he and his wife first met, and Watters has done some TV analysis since. He joined the CSN Bay Area team as a 49ers analyst in 2015.

Ricky Watters seems to be very active on social media, and it looks like he’s enjoyed fatherhood since hanging up the cleats.

The running back made five Pro Bowls in his career, and some have bandied his name about for the Pro Football Hall of Fame. That seems unlikely, even with all the receiving numbers added onto his rushing totals. Nevertheless, he seems happy with his life after football, and he’ll always have the honor of a nickname bestowed on him by a famous ESPN personality.

That could have gone way worse. Marc Bulger had to deal with countless references to Wizard of Oz because Ray Bolger played the Scarecrow. This reference was undoubtedly lost on 99.9 percent of Berman’s audience. At least we all understand what “Running” Watters meant.

MORE: Edgerrin James? Net Worth: How Rich is the Hall of Fame Running Back?