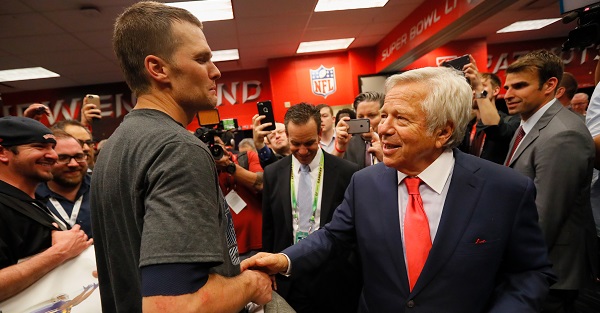 After a reported rift between quarterback Tom Brady and head coach Bill Belichick stole headlines during the season, Robert Kraft discussed issues in the New England Patriots organization yet again with NFL Network.

When he was posed with the question if Brady and Belichick would be back with the team next season, here’s what he said:

“I appreciate you asking that question, and I’m not going to respond to it. You’ll just have to see for yourself,” Kraft said.

There’s more, with Kraft and his son Jonathan discussing the difference between “tension” and “dysfunction” in the organization:

“Dysfunction is when people take energy and use it to think about how to undermine other people,” said Jonathan Kraft. “That does not happen. If it happens in this organization, I haven’t seen it.”

Kraft recently talked “egos” between Belichick and Brady before the AFC Championship game, but this takes it to another level.

The story went that Brady forced the trade of Jimmy Garoppolo and went above Belichick?s head to get it completed. The Patriots, Kraft, Brady and Belichick all released statements in the coming days talking about unity, expected to return the next season and downplaying any issues in the locker room.

That seems like Jonathan Kraft’s definition of dysfunction, if it actually happened.