Vontaze Burfict Should Be Banned From the NFL Forever 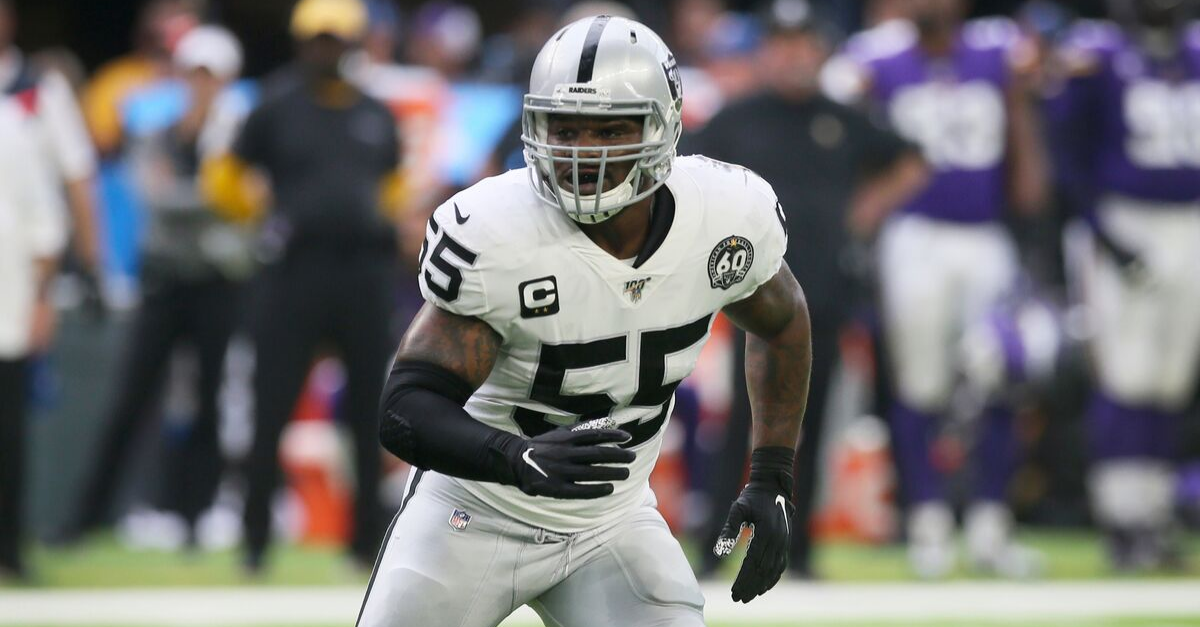 Old habits are hard to break. No matter how hard you try, you always seem to revert back to the one thing you know as normal. It?s just human nature. Not every habit is bad, by any means, but what Oakland Raiders linebacker Vontaze Burfict continuously does on the football field is downright wrong and a disgrace to the game.

In the second quarter of Sunday?s game against the Indianapolis Colts, tight end Jack Doyle caught the ball in the middle of the field and tried to get up to pick up more yards. However, he was met with a vicious, helmet-to-helmet hit by the 6-foot-1, 255-pound Burfict.

In fast motion, it looked like a normal, hard hit. In slow motion, well, it shows a much different story. Burfict was flagged for unnecessary roughness and ejected from the game.

As a result, especially given his past, the NFL has suspended Burfict for the remainder of the 2019 season, as first reported by Chris Mortensen.

If Vontaze Burfict is suspended for rest of season, as @mortreport reports, it would be the longest suspension for an on-field act in NFL history.

RELATED: Doctor Sues Antonio Brown for Farting in His Face, Not Paying Up

According to ESPN?s Adam Schefter, this is the longest suspension for an on-field act in NFL history. But again, given Burfict?s past and extensive history of rules violations, a 12-game suspension isn?t overly surprising.

During his playing days with the Cincinnati Bengals, after going undrafted in 2012, the 29-year-old Burfict received 13 suspensions and fines over seven seasons. ESPN?s Field Yates reports he?s lost over $5 million dollars and has been suspended 22 games over his career.

Vontaze Burfict has now been suspended four times for a total of 22 games, costing him $4,622,182 in salary and been fined nine other times totaling $411,064. Over $5M lost for unacceptable on-field actions.

Of course, per Burfict?s agent Lamont Smith, the former Pro Bowl linebacker will appeal the season-long suspension because it?s ?excessive and the play that triggered the suspension was a football play.?

You be the judge:

BREAKING: #Raiders LB Vontaze Burfict has been suspended for the remainder of the season for this helmet-to-helmet hit on #Colts TE Jack Doyle. #RaiderNation pic.twitter.com/SnUPM14ITp

#Raiders LB Vontaze Burfict has been ejected from the #Colts gamepic.twitter.com/shskk2BUw3

By the looks of it, this is just another dirty play to add to Raiders? Vontaze Burfict?s resume. The suspension for the rest of the season clearly means the NFL officials in New York aren?t having anymore of this nonsense.

?Vontaze Burfict of the Oakland Raiders has been suspended without pay for the remainder of the 2019 season, as well as any postseason games, for repeated violations of unnecessary roughness rules, including in Sunday?s game against the Indianapolis Colts.

?NFL Vice President of Football Operations Jon Runyan issued the suspension for a violation of Rule 12, Section 2, Article 10, which states that: ?It is a foul if a player lowers his head to initiate and make contact with his helmet against an opponent.? In his letter to Burfict, Runyan wrote:

“?There were no mitigating circumstances on this play. Your contact was unnecessary, flagrant and should have have been avoided. For your actions, you were penalized and disqualified from the game. Following each of your previous rule violations, you were warned by me and each of the jointly-appointed appeal officers that future violations would result in escalated accountability measures. However, you have continued to flagrantly abuse rules designated to protect yourself and your opponents from unnecessary risk.?

?Under the collective bargaining agreement, the suspension may be appealed within three business days. Appeals are heard and decided by either Derrick Brooks or James Thrash, the officers jointly appointed and compensated by the NFL and NFLPA to decide appeals of on-field player discipline.?

Let?s make one thing clear: Vontaze Burfict should never be allowed on a NFL football field ever again.

Enough is enough. There is definitely room for second, third, and even fourth chances in life, but yet another illegal hit, according to the rules, has crossed a line. Just look at these plays.

Another suspension coming for Vontaze Burfict.

At what point does the league say enough is enough and ban him?

Burfict, a team captain for head coach Jon Gruden, signed with the Raiders this offseason to hit the reset button. Wide receiver Antonio Brown did the same to get over the drama he had on and off the field while with the Pittsburgh Steelers. Yet, old habits have landed them both in trouble once again.

There?s no denying Burfict, who played NCAA college football at Arizona State, has talent to compete at a high level. The Raiders need him in a tough division with the Kansas City Chiefs, Denver Broncos, and Los Angeles Chargers, too. But there is absolutely zero room for this in the game of football.

Not to mention, he blew kisses to the crowd, which is another sign that he clearly does not care.

Only time will tell if they appeal goes through and Burfict will be allowed to play this upcoming weekend against the Chicago Bears, but if the NFL were smart, NFL commissioner Roger Goodell would ban the linebacker from the league so someone else doesn?t get seriously injured.