Doctor Sues Antonio Brown for Farting in His Face, Not Paying Up 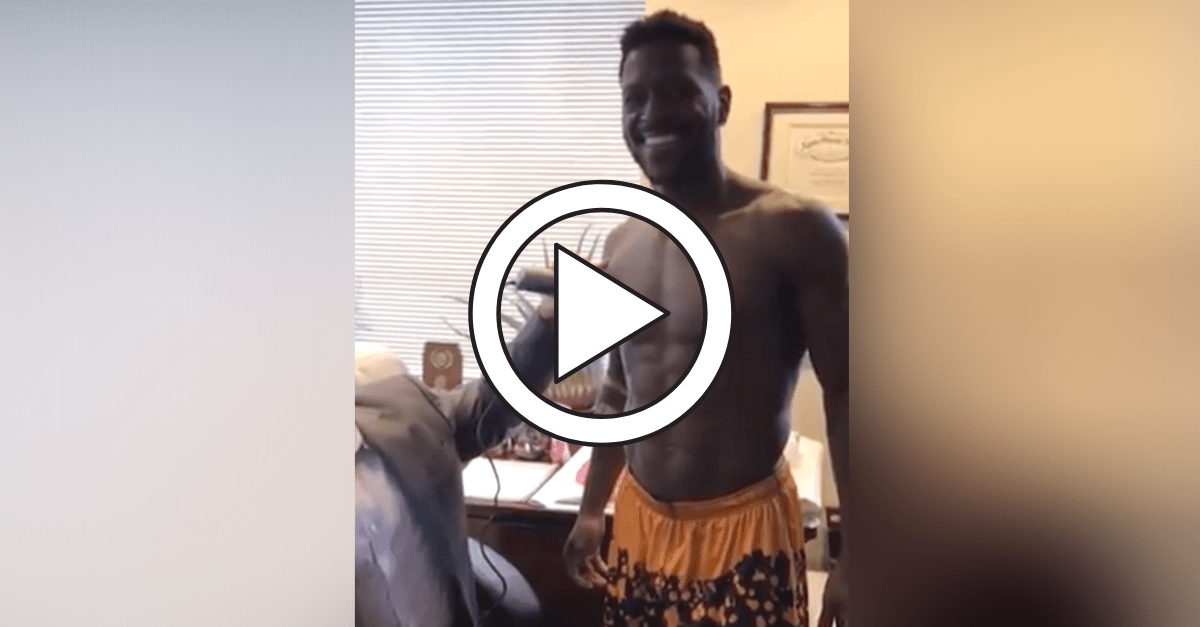 Somebody needs to sit down with New England Patriots wide receiver Antonio Brown and figure out what the heck is going on. What happened to close the 2018 NFL season with the Pittsburgh Steelers, and the ugly divorce that followed, pales in comparison to the last few weeks. Every single day it seems, something new comes around with everyone wanting a piece of the action against the All-Pro.

But unfortunately for everyone else currently suing Brown, it is Dr. Victor Prisk whose story takes the cake.

Prisk, who runs Prisk Orthopaedics and Wellness in Monroeville, Pennsylvania, filed a lawsuit against Brown in early September alleging the seven-time Pro Bowl selection owes him $11,500 in unpaid fees, according to the New York Post. Now that sounds bad and all, but that’s not even the worst part of the story.

TMZ obtained video of Prisk’s appointment to check Brown’s body fat last August, which showed Brown repeatedly ripping ass and smiling the whole time. These aren’t whispers that he’s trying to hold back either. Antonio Brown is throwing cheek-clappers in the doctor’s face and loving it.

While most of us would laugh hysterically at some earthquake-inducing, fog horn flatulence, Prisk was not amused.

“It seemed just childish to me,” Dr. Prisk, a former bodybuilder and gymnast, told Sports Illustrated, adding that he’d heard about Brown’s “flighty” reputation for not paying bills before seeing him. “I’m a doctor and this man is farting in my face.”

And if Prisk’s assessment of Brown’s smelly character is to be believed, he’s right on the mark with several other lawsuits Brown is facing.

Sued by Personal Chef: Celebrity chef Stefano Tedeschi claims Brown owes him $38,521. The chef catered a Pro Bowl party for Brown in January, but says that Brown, following the day-long catering event, demanded that Tedeschi and “those m—–f—ing crackers” get out of his house without cleaning and collecting their equipment.

Tedeschi alleges that the next morning, Brown found a severed salmon head in his freezer, which the chef was going to use for a soup. Brown (who must have been thrust into The Godfather and was being attacked by Luca Brasi) allegedly thought the fish head was a threat from the mafia and refused to pay for the services as a result.

Sued by Female Trainer, Alleged Sexual Assault: Brown was accused of sexual assault on three separate occasions between 2017-18 by his former trainer, Britney Taylor. She alleges Brown “forcibly kissed her and masturbated near her during separate encounters,” according the complaint obtained by USA Today Sports.

Alleged Sexual Misconduct by Artist: After purchasing a painting of himself at a June 2017 auction, Brown wanted another self-portrait painting done at his home in Pittsburgh. He invited an unnamed female artist over, who says Brown made advances on her in the most disturbing of circumstances.

“I was about 40 percent done on the second day, and I’m on my knees painting the bottom, and he walks up to me butt-ass naked, with a hand cloth covering his [penis] and starts having a conversation with me,” the woman told Sports Illustrated. She says that after ignoring Brown, he dropped all contact with her the very next day, and she never finished the mural.

The woman is not pursing legal action, but came forward with the story after Britney Taylor’s claims became public.

Accused of Unpaid Fees for Piranhas: Jeff Leung of Aqua World Pet Super Store is considering legal action against Brown, according to The MMQB’s Robert Klemko. Apparently, Leung installed a 220-gallon fish tank in Brown’s home last June, which was filled with piranhas. A few months later, Leung was called “past midnight indicating an emergency with the fish.”

When he arrived, the tank was covered in algae, and every piranha was dead and rotting. Leung claims Brown removed the fish tank from his home and failed to pay Leung more than $2,000.

My story on Antonio Brown, his spiraling self-sabotage, a new account of misconduct, and his bizarre string of debts. https://t.co/oN8JZI2pM5

Add onto these the furniture-throwing incident last October, a reckless driving citation in November, and an alleged domestic dispute with his mother and daughter in January, and you’re drinking a cocktail of uncertainty. Oh, don’t forget that weird ass summer with the Oakland Raiders.

And for whatever reason, Brown’s Raiders jersey is still selling like hotcakes on Amazon despite him never playing a single down in Oakland.

Traditionally, New England doesn’t sit around and wait for stuff like this to overrun the locker room. It’ll be interesting to see how the franchise responds with its new star, who caught four passes for 56 yards and his first touchdown from Tom Brady in his Patriots debut against the Miami Dolphins.