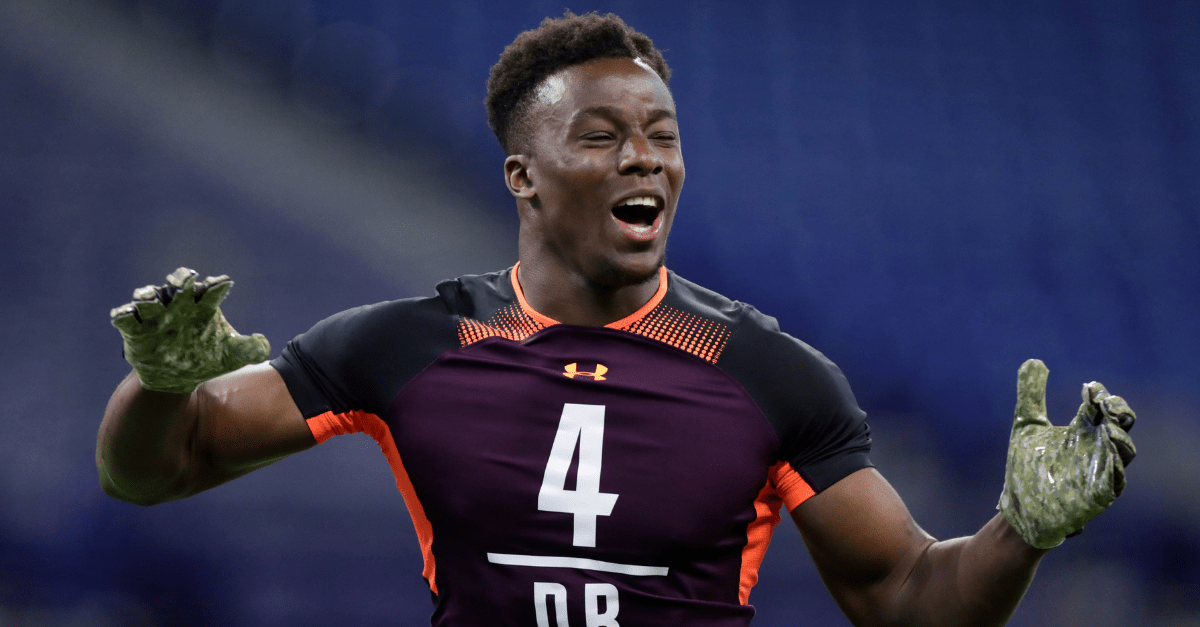 The night was supposed to be fun, a big celebration for a bright future in the NFL. There should have been hugs and smiles all around. Nothing crazy should have happened. Unfortunately, the party ended in tragedy.

Washburn cornerback Corey Ballentine was out with fellow college defensive back Dwane Simmons into the early hours of Sunday morning. That?s when officers responded to a disturbance call just four blocks from the Topeka, Kansas campus.

Simmons was found dead in the street, according to WIBW. Ballentine, the football player who was selected in the sixth round (No. 180 overall) by the New York Giants in the 2019 NFL Draft on Saturday just hours earlier, was shot and went to the hospital in a private car with a non-life-threatening gunshot wound.

More on the health of #Giants 6th-round pick Corey Ballentine: The gunshot wound is not life-threatening, source said. In fact, doctors told him the recovery is just a matter of weeks. Horrific situation, as his roommate Dwane Simmons was killed in the shooting following a party.

RELATED: Arrest Made in Life-Threatening Shooting of Georgia Lacrosse Player

It shouldn?t have to be this way. A group of kids celebrating a monumental accomplishment should be unforgettable for all of the right reasons. This is for all of the wrong ones.

Police are investigating the shooting. The loss of Simmons is beyond tragic. Ballentine is expected to make a full recovery.

Following the team meeting, Washburn head coach Craig Schurig graciously sat down with me. He wants people to know Dwane Simmons was an energetic young man who inspired. "He's like the Energizer bunny." And he always made folks laugh. WU folks thought he could be a comedian. pic.twitter.com/MuA7v07ztb

?Hearbreaking news about Dwane Simmons,? Washburn Ichabods head coach Craig Schurig said in a statement. ?Dwane is one of the most energetic and well-liked players I have ever coached at Washburn. Dwane?s infectious smile and love for football and his teammates was truly inspirational. Our prayers of healing go out to his family, his parents Navarro and Yasmine Simmons and Chaquilla Williams.?

?Any time we lose a student it is a sad occasion, but it is particularly poignant to lose a student through such a senseless act. Both Dwane and Corey have been great examples and representatives of the football team and of Washburn University in general. This was a terrible way to end a day which should have been a day of celebration and a day to look forward to Dwane?s upcoming year at Washburn and the beginning of Corey?s professional career.?

Simmons, a Lee?s Summit, Missouri native, made 59 tackles and had three interceptions in 22 career college football games with Washburn.

It?s going to take a long time for the community to get over this tragedy, especially Ballentine, a First-Team All-MIAA selection who became the NCAA Division II school?s highest-ever draft pick.

It’s all a crazy dream until you do it. I can’t even explain the emotions I have right now. S/o the people that told me to pick a more realistic career. This is as real as it gets. Thank you to the Giants organization for believing in me. It’s only up from here. #GiantsPride pic.twitter.com/86EiwIP4fM

In his career with the Ichabods, Ballentine tallied 186 tackles, including 10 tackles for loss, four forced fumbles, three fumble recoveries and five interceptions in 46 games. He earned the Cliff Harris Award given to the small college defensive player of the year.

Statement from the #NYGiants: We are aware of the tragic situation and continue to gather information. We have spoken to Corey, and he is recovering in the hospital. Our thoughts are with Dwane Simmons’ family, friends and teammates and the rest of the Washburn community.

?We are aware of the tragic situation and continue to gather information. We have spoken to Corey, and he is recovering in the hospital. Our thoughts are with Dwane Simmons? family, friends, and teammates and the rest of the Washburn community.?

The beginning of Corey Ballentine?s NFL career is not how anyone wanted it start. The off-campus shooting is just awful. All anyone can hope now is makes a full recovery quickly and he spends the rest of his career honoring his college teammate.