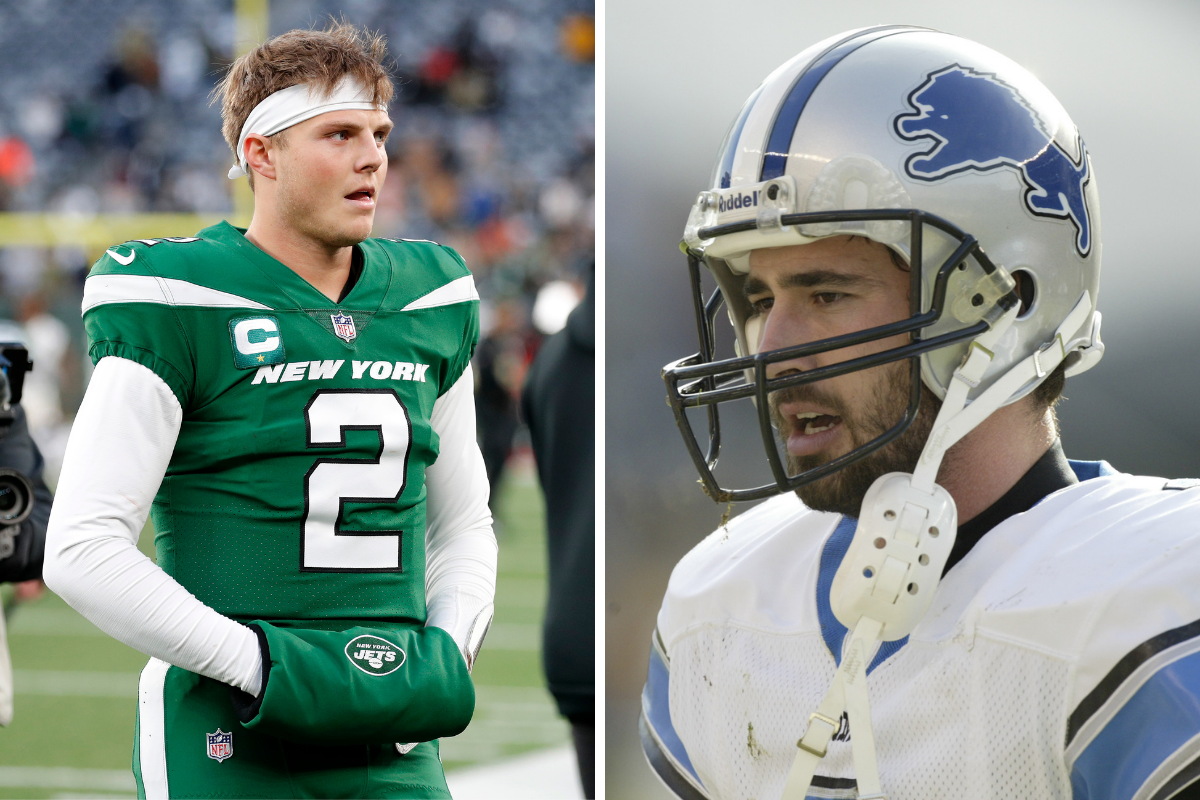 One of the top personnel men in football had a damning comparison for New York Jets rookie quarterback Zach Wilson a few weeks ago.

Colt McCoy with a better arm.

However, upon seeing Wilson on Sunday against Miami, he might be closer to Joey Harrington.

The comment by the personnel man was part of a larger discussion about this year’s rookie class of first-round quarterbacks. It wasn’t a pretty discussion. It hasn’t been a pretty year. Trevor Lawrence has been basically awful in Jacksonville, especially in terms of accuracy. But at least he has the Urban Meyer excuse.

Mac Jones has been fine, but he screams “game manager.” Trey Lance hasn’t played enough and the times he has played have been rough as he makes the huge leap in both level of play and from playing so little in college.

The only quarterback who received strong praise for potential was Justin Fields, whose development as a passer has been promising at times. But that’s maybe because he has so much to learn coming out of the Meyer-based system he played in at Ohio State. Still, the personnel man saw a real chance for Fields to break away from the group of five first-round picks because of both his physical ability and leadership qualities.

“He looks like a backup. He’ll know what to do to get you through a game and start once in a while. That’s what you saw with Colt (McCoy) this season … but there’s nothing there to get excited about,” the personnel man said.

McCoy has gone from third-round pick in 2010 to 12-year journeyman. He has played for five teams, including currently with Arizona. That’s a respectable career.

It’s not what the Jets are anticipating out of a guy they took at No. 2 overall and who they traded up to get. They appear to have a guy who gets sacked at an alarming rate (34 with 308 attempts is brutal), doesn’t produce when he throws the ball (only 6.2 yards per attempt) and gets intercepted a lot (11 so far).

If you interpret those stats, that’s a combination of someone who doesn’t process very well, is afraid to throw and makes mistakes when he does throw it. Worst of all, Wilson looks downright scared at times. Again, that gets to the Harrington comparison. Harrington was the No. 3 pick in the 2002 NFL Draft. For those who don’t remember, Harrington was a wonderfully nice guy who was drawn to throwing the safest, least-threatening pass possible in the most pressurized situations. He was, as he became known, “Checkdown Charlie.”

While it’s unfair to draw any final conclusion about a rookie quarterback this early in his career, Wilson’s performance against the Dolphins was troubling in its complete homage to Harrington. In particular, two plays at the end of the game with less than three minutes remaining was exceedingly disappointing.

Down by a touchdown and facing a second-and-8 play, Wilson was flushed from the pocket and limited to a one-yard gain on the scramble. On third down, Wilson threw short into the flat, missing a pass behind running back Michael Carter.

It was damning display of inadequate courage given the circumstances. Yes, Wilson had been pressured all day (he was sacked six times). But this is a young quarterback who is not understanding how to test his limits in situations where there is little risk.

The Jets left Sunday with a 3-11 record. That’s bad. What’s worse is that they have a quarterback who didn’t seem to understand the point. When you’re already out of the race, there should be no fear. There should be no backing down from second-and-long or third-and-long at the end of a game.

There should be an attempt to learn something, even if that means making a mistake. The Jets certainly seemed to get the fearless concept early in the game, such as when they ran a third-and-long lateral play from Jamison Crowder to Braxton Berrios. It was an almost bizarre call in some ways; the kind of play you might otherwise save for a big game. Instead, the Jets took chances like someone playing on house money.

LOOK AT THIS PLAY CALL pic.twitter.com/C9sqURj1OH

Wilson should have taken that same type of chance at the end of the game. Instead of letting a pass fly on second down, he tried to run. On third down, he went underneath. This is a situation where an interception wouldn’t have meant anything to Wilson or the Jets in the grand scheme of the season. Again, even a mistake could have been lesson.

Instead, he was afraid to try.

Counter that against what the Dolphins are seeing from Tua Tagovailoa. Tagovailoa was far from great on Sunday. He had two interceptions that helped set up 10 points for the Jets, including a pick six in the fourth quarter. The difference is that Tagavailoa is learning what he can and can’t do — and so are the Dolphins.

The same is true with Lawrence in Jacksonville. Again, Lawrence hasn’t looked good on the way to throwing 14 interceptions this season. That included four in a shutout loss to Tennessee. At the same time, Lawrence has a chance to learn from failure, hopefully the way Peyton Manning learned when he set the rookie record for interceptions.

What the Jets appear to have in Wilson is a guy who looks small in the pocket, as if the game is simply too big for him.

I’m generally not a big fan of making a decision on awards before I have to, but as long as you keep an open mind to change, there’s no harm in discussing it along the way. To anybody with a pulse, it’s obvious that Dallas Swiss Army Knife defender Micah Parsons is the Rookie of the Year. He looked like a cornerback in coverage on one play Sunday. He’s ridiculous.

With that said, let’s discuss a crowded field for Most Valuable Player. Green Bay quarterback Aaron Rodgers is starting to pull away despite some self-inflicted burdens. This is the year where Rodgers not only tried to force his way out of Green Bay, he also didn’t show up for the offseason program, AND he pulled an arrogantly dishonest stunt over Covid vaccination that cost him a game that the Packers lost.

At the same time, brilliance is brilliance. Green Bay has the best record in the league at 11-3, Rodgers has only four interceptions and leads the league in quarterback rating while operating behind an offensive line that has been riddled by injuries all season.

So, while some people could make the argument that Rodgers has done plenty of things to create tension in the Packers organization, he has been singularly brilliant on the field. While there is still room for someone like Tom Brady, Patrick Mahomes, Matt Stafford, Jonathan Taylor, Kyler Murray or Dak Prescott to make up the difference, Rodgers gets the nod as of today.

And that’s quite an accomplishment, especially considering the self-inflicted circumstances.

The great trivia about Welker is that the first points he scored in his NFL career came while subbing for Miami kicker Olindo Mare during a 2004 game at New England. Mare got hurt late on a Saturday and the Dolphins didn’t have time to find a kicker to replace him.

The left-footed Welker hit a 29-yard field goal, an extra point and looked smooth in the process. On Sunday, when Carolina lost kicker Zane Gonzalez to injury in warmups, the Panthers went through chaos looking for a replacement. The impromptu tryouts looked like something from TikTok.

Suffice to say, that served as a reminder to yours truly and Welker of that day in 2004. So, I reached out.

JC: When you hear about a kicker getting hurt in pregame like Carolina yesterday, does it make you remember that game at New England? And what do you remember most about that day?

Welker: “When I saw them trying to figure out who the backup was, it made me think, it’s not as hard as those guys made it look! Lol! I didn’t think it was that big of a deal that day. I did it most of my life up to that point.”

How did Saquon catch that 🤯 pic.twitter.com/8dVFuQsElJ