You can point to any number of situations that led to Jacksonville Jaguars head coach Urban Meyer being fired after only 13 games of his NFL career. His list of humiliations was stunning in less than a year, capped by the super-odd story that came out in the Tampa Bay Times Wednesday about Meyer kicking former Jaguars kicker Josh Lambo while he was stretching in August.

But the truth is that the common sense of quarterback and No. 1 pick Trevor Lawrence is really what got Meyer kicked to the curb. In the last two weeks, Lawrence made two simple points. The first is that James Robinson should be playing if the Jaguars want to win. The second came Wednesday when Lawrence said simply that the drama has to stop. 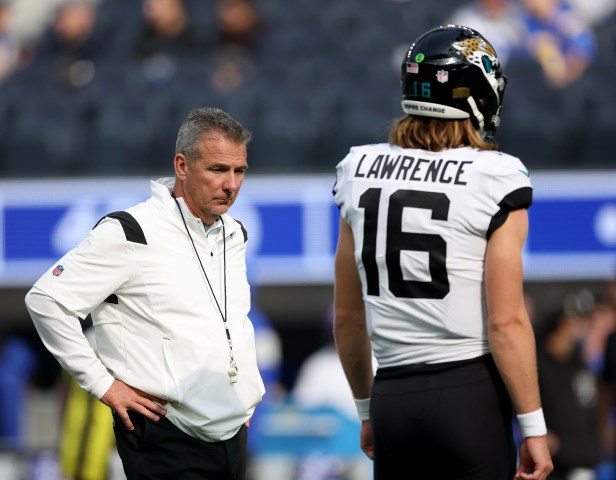 Since Meyer was the source of all the drama, it was Meyer who had to go. And Lawrence was able to get that accomplished without the messy kind of divorces that often happen between coaches and quarterbacks. Even before the decision was made late Wednesday night to move on, several executives around the league talked about the power Lawrence not only had, but had to exert in this situation.

"That kid has so much power in that situation and he probably doesn't even realize it," a former NFL executive said. "He really needs to think about this carefully. I know he probably feels some loyalty to Meyer, but this is business. You can't tolerate what's going on there and expect to win."

Lawrence made that point earlier in the day in remarks to ESPN reporter Mike DiRocco.

"You're always going to have some form of drama. I've learned that the NFL is just more drama, in general, than college, no matter where you're at," Lawrence said. "But you're right, there's been a lot. To your point, I do think that has to change and that's something that we need to work on for sure.

"So, you can't always be in the headlines. You just got to go play football and that's where we're trying to get and I have no doubt we'll get there, but for sure [it has to change]."

In the span of a few sentences, Lawrence told Jaguars owner Shad Khan all he needed to know. Sure, Lawrence is probably a little young to be making decisions like that. He doesn't have the experience of Aaron Rodgers, who helped push out Mike McCarthy, or Dan Marino, who did the same with Don Shula in 1996, or John Elway, who had a highly ugly and highly public split with coach Dan Reeves.

I know there are many of fans who think it's absurd that a quarterback -- especially such a young one -- could have such sway on who is the coach. But it's a reality of the NFL. Finding a great quarterback is a lot harder than finding a great coach. Admittedly, neither is easy, but don't fool yourself.

In the face of Meyer's clownish behavior, Lawrence had to protect his career and the future of the organization. This isn't just about one week where Meyer lamely claimed that he wasn't responsible for Robinson not playing -- hey Urban, you're the head coach -- or that late last week Meyer called his assistant coaches "losers."

This is about an entire season that has exposed how little Meyer really understands about football. It's about exposing that Meyer was really just a great recruiter in college who rolled out more talent than opposing teams could handle.

It's about Meyer being tone deaf to the world, a fact that dates to his college football days when he tolerated one ugly incident after another at Florida (Percy Harvin punching a coach, Harvin secretly leaving school for months, Aaron Hernandez beating people up and shooting at others). It includes him tolerating an assistant coach who repeatedly beat his wife at Ohio State. It includes him trying to hire a strength and conditioning coach in Jacksonville who just lost his college job for making racist remarks. 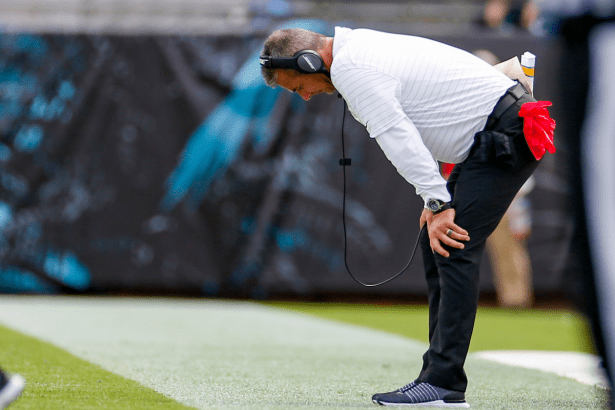 It's about Meyer not getting the simplest ideas about leadership, like getting on the team plane after a game in Cincinnati earlier this season and flying home with your players and coaches.

Instead, Meyer stayed in Ohio to literally play grab ass.

And that's not just a bad pun, it's fact. Just like it was fact that every time the camera focused on Meyer during Jacksonville's humiliating loss to Tennessee on Sunday, Meyer was by himself. He was never talking to an assistant, a player or even an official. He was alone, walking around with nothing to contribute or trying to avoid the idea that he was part of the humiliation.

When Meyer had the audacity to come out and blame "leakers" for being the problem, it was laughable. The guy who isolated himself was now pointing fingers? Classic.

The truth about Meyer is that he worked well at the college level because he could hide his bad behavior in smaller cities like Gainesville, Florida, or Columbus, Ohio. He could be a bully and not have to back it up. These are places where the antics of the head coach are tolerated more easily, especially when they win. But the truth is that Meyer also wore out people in those places.

When you have to compete at the highest levels of the sport, the scrutiny is much tougher. The expectation of professional behavior is supreme and the difference between winning and losing is measured in follicles, not recruiting classes. Your ability to keep a group of coaches and players together is tested to the extreme.

Otherwise, it all falls apart quickly, which is what happened the past two weeks, despite the presence of a young passer who people once compared to the next Elway or Manning or Namath.

Even with Lawrence, the Jaguars offense is so inept that they have now gone seven consecutive games without scoring even 20 points. Shutout was just the exclamation mark on that streak. In a league where the rules are tilted toward scoring, that's hard to do. Throw in the fact that they have Lawrence and it's troubling.

Furthermore, Lawrence is starting to look rattled. One of his four interceptions against Tennessee came on a fake blitz/drop combo play by the Titans. Tennessee initially showed four rushers in the middle with a fifth rusher coming on a delay from Lawrence's right side. Just as the rusher came from the right, the Titans dropped two of the four rushers in middle. They ended up in coverage right where Lawrence's hot read was expected to go.

It was a classic trap, exacerbated by an inept design, a lack of offensive talent to expose the defense, and a quarterback who doesn't trust what's going on around him. This is a recipe for destroying a great prospect, similar to what Houston did long ago with David Carr.

And that's where Lawrence had to put his foot down, even if it wasn't overly dramatic. In reality, it didn't have to be because of the level of Meyer's incompetence. Questioning Meyer was the first step. Pointing out the drama was the next one.

Texting With an NFL Defensive Coordinator 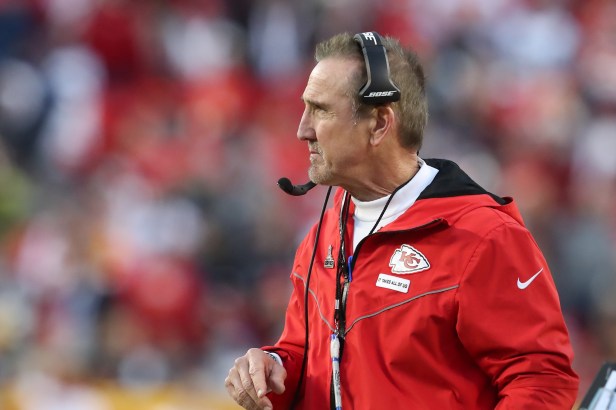 The intriguing part of those two seasons is that they were not only in his first year running the defense for those teams, but also that the teams started off very poorly before turning things around. In 2007, for instance, the Giants allowed 80 points in the first two weeks of the season as they started 0-2 before turning the year around and eventually beating undefeated New England in the Super Bowl with a stunning defensive performance.

In 2019, the Chiefs were 6-4 and had allowed more than 30 points four times and at least 26 in two other games. From there, the Chiefs ran the table on the way to beating San Francisco in the Super Bowl. That nine-game run started with five straight games allowing 17 points or less.

This season, the Chiefs gave up 27 points or more in six of the first seven games, including four straight games allowing 30 or more. The Chiefs were 3-4 and many analysts left them for dead. Now, they have won six straight and have allowed 17 points or fewer in five of those games. There's a caveat to that, including playing Green Bay without Aaron Rodgers (COVID-19), Dallas without Amari Cooper (COVID-19) and facing the reeling Raiders twice.

With that in mind, Spagnuolo was asked via text why it is that some of his best teams have followed that pattern of getting better as the team wears on?

"Good loyal assistant coaches who believe in what we do and players who buy into the words and the fundamentals of what those coaches teach," Spagnuolo wrote. "That and working through (the) early part of season and getting players in (the) right spots as we go through early games ... figure out what they do best."

If that sounds familiar, it's similar to the philosophy of New England coach Bill Belichick, who starts every season with fundamental schemes and then adds complexities as the season goes on. Sometimes it's not so pretty early on, but it gets settled at the end.

"You'd be right about that!" Spagnuolo said. 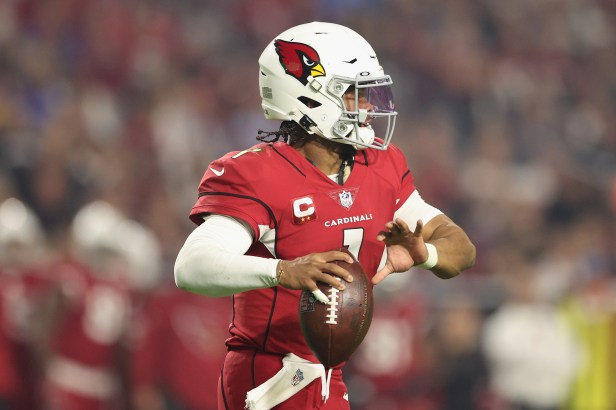 About 20 years ago, a fellow football writer was pointing out that quarterback Randall Cunningham, who was then playing for Minnesota, was having a better season statistically than Brett Favre in Green Bay.

That writer attempted to use that point in his argument that Cunningham was better than Favre. While Cunningham is a vastly underrated player in NFL history and sadly wasted a lot of his career playing in a poorly designed offense in Philadelphia, he simply wasn't better than Favre.

Not at that point in their careers and, ultimately, not really ever.

I listened as my fellow writer (we are both now selectors for the Pro Football Hall of Fame) spouted his contention and then rested his case as if he was a latter-day Clarence Darrow. He had a grin on his face as if to say, "Prove me wrong."

"So," I said. "If we're choosing up sides for a game and I give you the first pick, does that mean you're taking Cunningham over Favre?"

The grin disappeared from the other writer's face.

All of that is meant to make a simple point: Don't be fooled by stats in football. Most of them don't mean a lot. That said, there is one I consider a relatively consistent indicator of judging a team, particularly in this era.

My good friend and talented gambler Dutch Wydo was the first to point this out to me. I consider it a great resource, particularly once you get this far into the season and the numbers aren't influenced by one or two good games.

With that, here's a breakdown of how this season is going. This analysis is done without adjusting for the strength of the opponents each team has played. 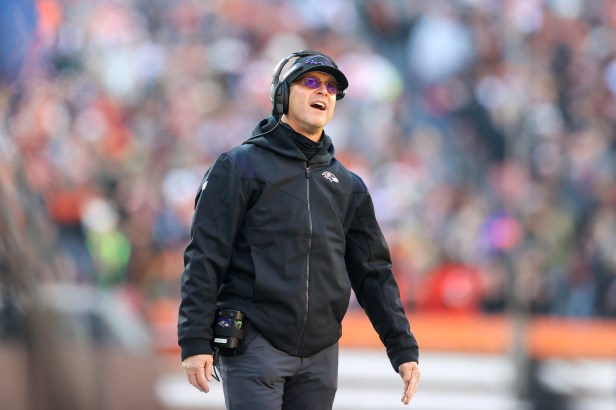 Jason Cole has covered the NFL since 1992 and has been a selector for the Pro Football Hall of Fame since 2012. He is the author of seven books, including the biography of John Elway (Elway: A Relentless Life).