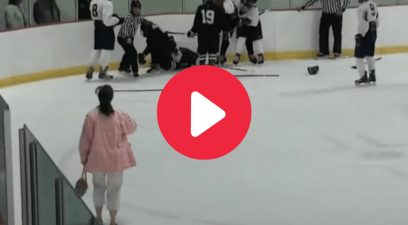 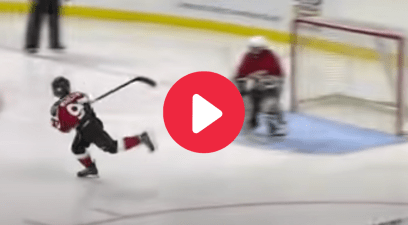 One of life’s mottos tells us to “take the bull by the horns!” When we’re facing a difficult task, you need to attack it bravely and confidently, right? When you were 19 years old, I’d bet you probably thought that about everything you did. Well, so did Carolina Hurricanes rookie Andrei Svechnikov when he opened his mouth on Monday night. A three-time NHL Most Valuable Player helped him close it.

Washington Capitals star Alexander Ovechkin began trading elbows with Svechnikov about halfway through the first period. Washington, the defending champions, held a 2-0 series lead in the Stanley Cup Playoffs, but fell behind early in Game 3 on the road at PNC Arena. The 19-year-old rookie didn’t back down from a 33-year-old veteran who’s 50 pounds heavier than he is. While I appreciate his confidence, it sure didn’t get him very far.

The two Russians dropped their gloves, and the fight was on. The kid started with two earhole shots that didn’t faze Ovechkin one bit. The veteran pulled forward and missed with his first shot. Then, one powerful right hand connected, and Svechnikov was out like a light.

The “fight” lasted about five seconds from the time the gloves hit the ice to the instant Svechnikov’s body joined them.

Ovechkin was the first overall pick in the 2004 NHL Draft. Svechnikov, the second overall pick in the 2018 NHL Draft, became the first player born in the 2000s to score an NHL goal. This season, they combined for 126 points, they scored 71 goals (even though Ovechkin had 51 of them), but neither are known as big fighters. In fact, HockeyFights.com says this is only Alex Ovechkin’s fourth career fight over the last 12 years.

According to Carolina head coach Rod Brind’Amour, this one was Svechnikov’s first-ever fight, and Ovechkin took advantage of the kid who needed help to the locker room and didn’t return after an “upper-body injury.”

“One guy’s gloves comes off way first. And that’s Ovi, not our guy. So it’s a little bit frustrating because he got hurt. It’s [Svechnikov’s] first fight. He’s played 90 games. He’s never fought in his life, and I’m pretty sure Ovi knew that. So that stuff bothers me.”

Regardless of how the fight turned out, Carolina rallied after seeing the loss of their franchise’s future. They outshot Washington 45-18 on a night that ended with an impressive 5-0 win for the Hurricanes.

Ovechkin said after the game he hoped Svechnikov was alright and added, “He asked me to fight… You don’t want to see a guy get hurt.”

This was a case of wisdom trumping youthful arrogance. When you skate onto that ice, it doesn’t matter if this is your third or your 124th NHL playoff game. Every player is equal, and if you want to challenge the big dog in the yard, sometimes you’re going to get bit.