Brock Lesnar’s Net Worth: How “The Beast” Racked Up Millions 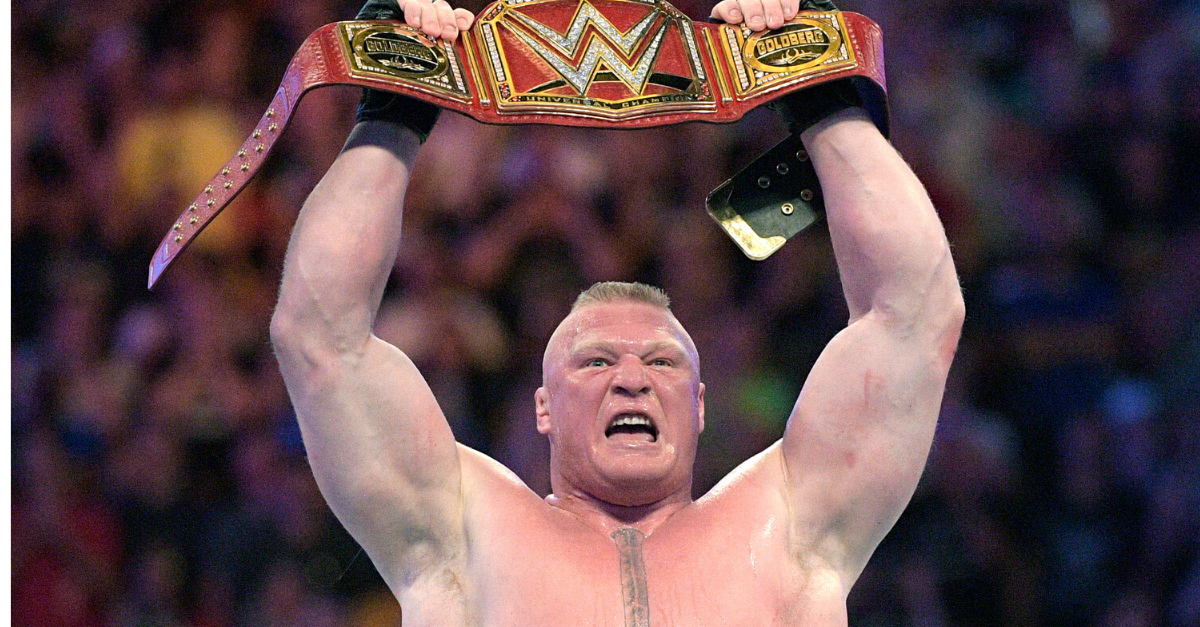 On WWE Raw, Paul Heyman officially informed the audience that Brock Lesnar‘s contract had been absorbed, and The Beast is now back in the ring on Monday Nights. This was only a few weeks after being drafted to WWE SmackDown and defeating Kofi Kingston on the show’s FOX debut to once again win the WWE Championship.

Lesnar also continued his feud with Rey Mysterio, which involved Lesnar attacking his son Dominic. This led to Cain Velasquez debuting in WWE to defend Rey and Dominic, rekindling their old UFC feud from back in 2010.

At Crown Jewel, Lesnar was able to defeat Velasquez, and now he is on a mission to take out Mysterio. However, as seen on Raw, Mysterio was able to gain an advantage, taking him out after hitting him with multiple shots with a pipe to his leg, followed by a shot to the head with Lesnar’s WWE Championship.

It looks like the WWE Universe will see Brock Lesnar vs. Rey Mysterio for the WWE Championship at Survivor Series in 2019, but his bank account is even bigger than the showdown.

Brock Edward Lesnar was born on July 12, 1977 in Webster, South Dakota. In high school, Lesnar became involved in athletics, competing in football and amateur wrestling. He attended Webster High School, and placed third in the state as a heavyweight wrestler during his senior year.

His athletic resume started to build even more during his time at the University of Minnesota, where he became NCAA Division I Heavyweight Champion in 2000 for the Gophers. Before that, Lesnar placed 5th in the National Junior College Athletic Association (NJCAA) heavyweight wrestling championship while with Bismarck State College in 1997 before winning the title the following year.

In 2000, Lesnar was signed to the WWE to compete for the company’s then-developmental promotion, Ohio Valley Wrestling (OVW). In Ohio Valley Wrestling, he won the OVW Southern Tag Team Championships along with Shelton Benjamin. Just after two years as a professional wrestler, Lesnar debuted on an episode of Raw following WrestleMania. A few months later, after winning the King of the Ring, Lesnar defeated The Rock to become the WWE Champion for the first time.

In 2004, less than two years after debuting on the main roster, Lesnar left WWE after his WrestleMania XX match with Bill Goldberg to pursue a career as a football player with the Minnesota Vikings in the National Football League.

In honor of #WrestleMania, throwing it back to @BrockLesnar's time in the @NFL. 🔥

What other wrestlers could play in the League? pic.twitter.com/hIEBDrKqeM

However, this did not last long, as he was cut from the NFL team. He also continued his professional wrestling career for a couple more years, competing for New Japan Pro Wrestling and winning the IWGP Heavyweight Championship.

His next pursuit was a career as a mixed martial artist, and he began competing in the Ultimate Fighting Championship (UFC). To continue his combat sport dominance, Lesnar became UFC Heavyweight Champion in just his fourth fight, defeating Frank Mir.

On October 23, 2010, Lesnar lost the UFC Heavyweight Championship to Cain Velasquez. His next fight was at UFC 141, losing to Alistair Overeem. He finished his career with a 5-3 record, including one no-contest after his final victory over Mark Hunt was overturned for a positive test for a banned substance.

Returns to WWE After 8-Year Hiatus

On the WWE Raw episode following WrestleMania 28, Lesnar returned after an eight-year absence, making a statement by giving John Cena an F5. Two years later, this eventually led to an absolutely dominant exhibition at SummerSlam 2014, as Lesnar annihilated Cena to win the WWE Championship for the fourth time.

Lesnar picked up his fifth WWE Championship win against Kofi Kingston at the debut episode of Friday Night SmackDown on FOX. Over the past few years, Lesnar has also heavily been involved in the WWE Universal Championship picture, commencing his first reign after defeating Goldberg at the WrestleMania 33 pay-per-view, and subsequent reigns at Crown Jewel in 2019 in a vacant title match against Braun Strowman and at Extreme Rules against Seth Rollins.

To this day, Lesnar holds the record of having both the longest reign at Universal Champion, and total days as champion. Lesnar has also picked up notable WrestleMania wins, namely against Goldberg, Roman Reigns, and even being the person who broke The Undertaker’s WrestleMania winning streak.

As a successful WWE wrestler and MMA fighter, Brock Lesnar’s net worth is reported to around $28 million by Wealthy Gorilla. During his wrestling career, Lesnar became the youngest WWE Champion of all time at 25 years old. Although he did not have much success as an American football player, aside from his days in high school, Lesnar has become one of the most successful WWE superstars of all time.

Currently, Lesnar is on the Raw brand as its WWE Universal Champion. Lesnar has been world champion eight times in the WWE world, continuing to solidify his Hall of Fame resume, along with a Royal Rumble and Money in the Bank winner. His last UFC fight was back in 2016, but he has not returned to the Octagon since.

Away from his life as a professional wrestler, Lesnar spends much of his time of his farm in Saskatchewan, Canada, near Maryfield and just west of the Manitoba border. He is married to former WWE Women’s star Sable, whose full name is Rena Marlett Lesnar.

This article was originally published November 8, 2019.