Who Has a Better WWE Career: John Cena or The Undertaker? 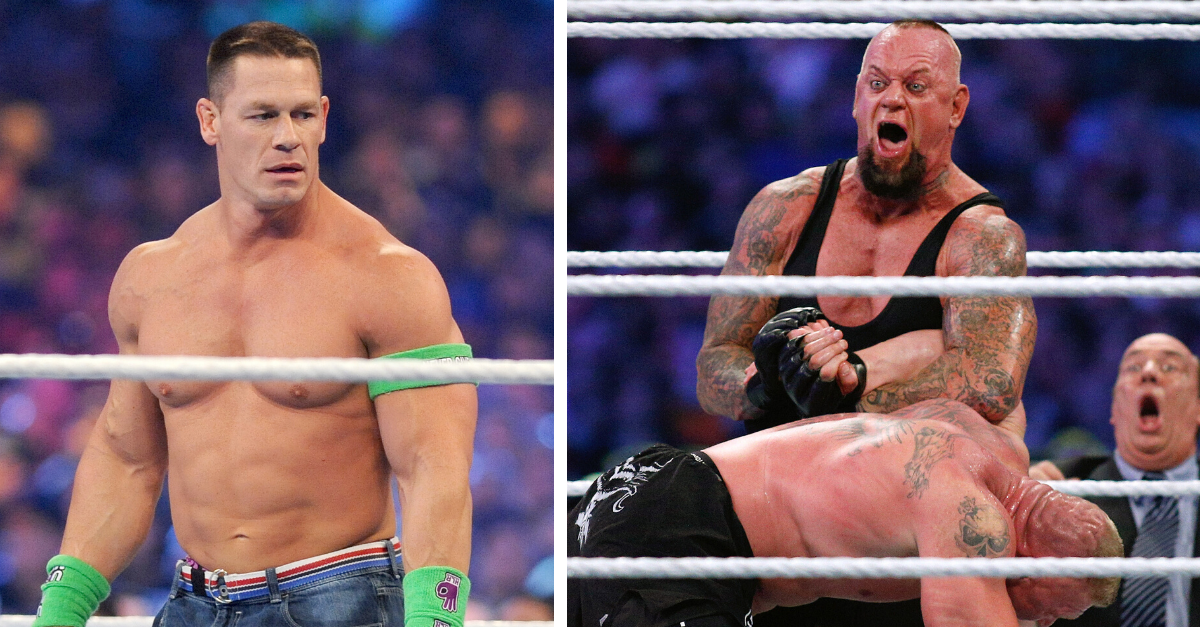 At WrestleMania 34 in New Orleans, Louisiana, The Undertaker defeated John Cena in less than three minutes. After failing to create a pathway to WrestleMania following Shinsuke Nakamura eliminating him in the Royal Rumble, Cena then tried to become No. 1 contender for Brock Lesnar’s Universal Championship at Elimination Chamber. However, he also failed and Roman Reigns won the match.

Following Elimination Chamber, Cena was without a match for the card. Other top superstars were occupied in other matches, leaving Cena without a spot. Then, on episodes of WWE Raw, Cena started to call out The Deadman. However, he received no response. Cena continued to challenge The Undertaker at WrestleMania, but The Phenom did not appear on Raw.

At WrestleMania, Cena tried one more time to call out Undertaker, but still no response. Then, as he started to walk up the ramp, the lights go out, and the gong hits. The Undertaker’s music starts, and he walks out to the ring, accepting the challenge Cena issued several weeks prior to the event.

Cena had little offense, as Undertaker dominated the match and improved his WrestleMania record to 24-2.

Although John Cena was the face of WWE for 15 years, The Undertaker has been loyal to WWE since his Survivor Series debut in 1990. Undertaker went 21-straight times to WrestleMania without losing. In fact, in this impressive feat, he defeated a long list of former world champions, including Kevin Nash (Diesel), Sycho Sid, Kane, Triple H, Ric Flair, Mark Henry, Edge, Batista, CM Punk, Big Show, Randy Orton, and Shawn Michaels.

Cena has racked up wins against many of those names as well. At WrestleMania, Cena has victories over former champions The Rock, Edge, Big Show, Batista, Shawn Michaels, Triple H, and JBL.

Regarding championships, Cena’s resume is more decorated than The Undertaker’s.

Cena has four reigns as Tag Team Champion (with Shawn Michaels, David Otunga, The Miz, and Batista), while Undertaker has six (seven including the WWE version of the WCW Tag Team Championship). The Undertaker’s tag team championship partners include Kane, The Big Show, Steve Austin, and The Rock.

The first match, which was a No. 1 contender tournament final for the WWE Championship, was won by John Cena on the April 10, 2003 episode of SmackDown.

At the Vengeance PPV on July 27, 2003, Undertaker defeated Cena. Then, Cena increased the record against Undertaker to 2-1 when he gained a victory on the August 7, 2003 episode of WWE SmackDown. On the June 24, 2004 SmackDown episode, Undertaker tied the series to 2-2, after defeating Cena. On the October 9, 2006 episode of Raw, Undertaker and John Cena competed to a no contest, after the main event match was interrupted by Booker T and The Big Show.

Nearly 12 years later, Undertaker broke the tie after defeating Cena in dominating fashion. Their WrestleMania match in 2018 certainly did not have a dream match feel to it, but it did not take away the fact that both Undertaker and Cena are two of the most popular wrestlers in WWE history.

MORE: The Undertaker?s Net Worth: The Deadman?s Rise to Riches