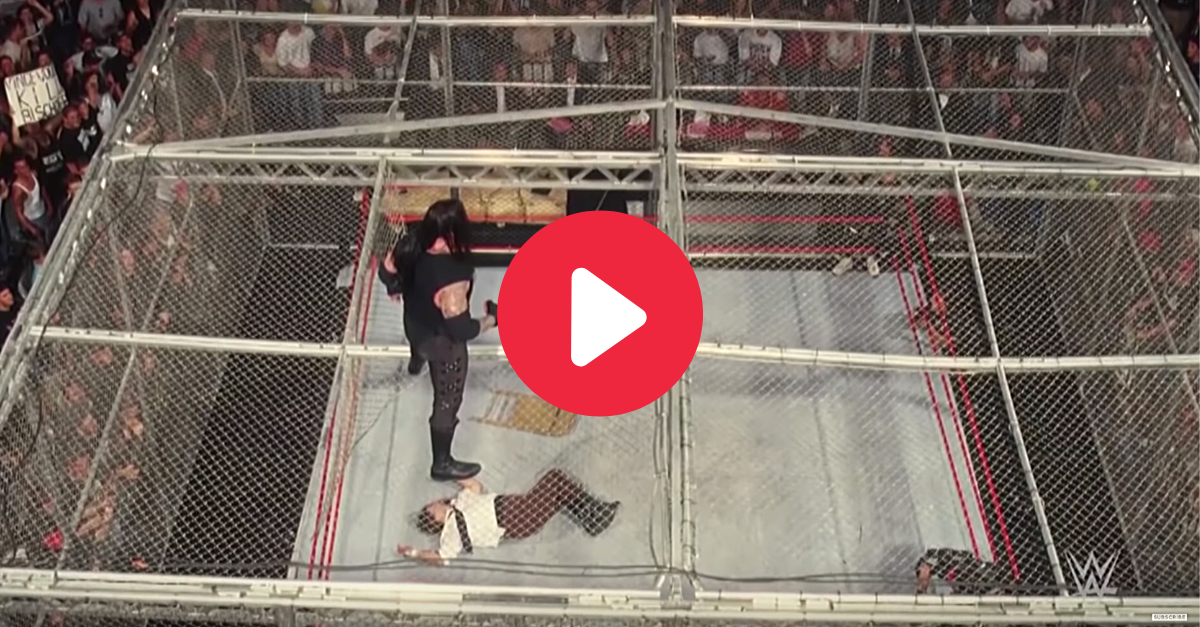 At WWF King of the Ring 1998, one of the most memorable moments in pro wrestling history occurred. To continue their bitter rivalry, The Undertaker (with Paul Bearer) and Mankind competed in a Hell in a Cell match, which became dangerous from the very beginning. Mick Foley decided early on to take the wrestling match to the top of the cage, causing Undertaker to climb up as well.

After brawling on top of the cage, one of the most dangerous moments in WWE history occurred, shocking the live crowd inside the Civic Arena in Pittsburgh, Pennsylvania.

The Undertaker grabbed Mankind, throwing him over the edge of the cage and landing on the announce table. Of course, this utterly stunned commentators Jim Ross and Jerry Lawler, even mentioning that he may be dead. Surprisingly, Mankind got up from being stretchered out and returned to the top of the cage.

Despite being severely injured, Mankind returned to the top of the cell to complete the match against despite disapproval from legendary pro wrestler Terry Funk, who was assisting him to backstage. Unfortunately, for Mankind, this decision led to him receiving a chokeslam through the cage onto the ring canvas. Foley still tried to compete with Undertaker, but this led to getting slammed onto a bed of thumbtacks. Finally, Undertaker pinned Mankind to end the match after performing his tombstone piledriver.

The other controversial match of the evening was the First Blood Match between Stone Cold Steve Austin and Kane for the WWF Championship. Mankind, even after being brutalized the match before, interfered in the main event match, but The Undertaker appeared to even the odds. However, his attempted chairshot to Mankind backfired, and Austin was hit instead. When Austin tried to hit Kane, the referee noticed that he was busted open, and Kane became the new WWE Champion.

In addition to these matches, others included The Headbangers and Taka Michinoku defeating KaiEnTai (Dick Togo, Funaki, & Men’s Teioh. The team of Too Much (Brian Christopher & Scott Taylor) ? who would later become Too Cool ? competed as heels and defeated Al Snow & Head; Jerry Lawler was the special referee of this match.

The New Age Outlaws, Billy Gunn and Road Dogg, retained their WWF Tag Team Championships by defeating the New Midnight Express ? Bodacious Bart and Bombastic Bob, who was accompanied by their legendary NWA manager Jim Cornette . X-Pac (with Chyna) also was successful in his match against Owen Hart, with interference from both Mark Henry and Vader. This was the only title match other than the main event.

Although this pay-per-view was memorable for the HIAC match, it definitely was not the caliber of a WrestleMania or SummerSlam. The extreme actions of the HIAC match was very fitting for the Attitude Era, since Vince McMahon was pulling out all the stops to defeat his WCW rival. However, Mick Foley has stated that even Vince told him after his match to never pull a stunt like that off again.

This article was originally published November 7, 2019.