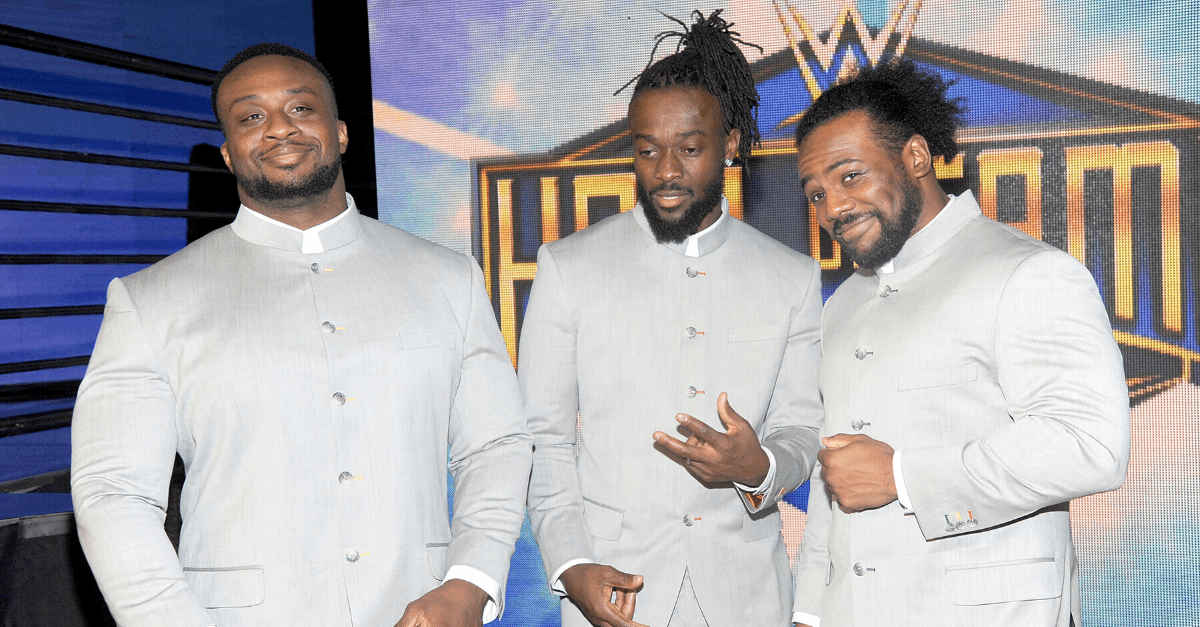 The New Day trio of Kofi Kingston, Big E, and Xavier Woods is the greatest WWE tag team of the past decade. While The Usos are a close second, The New Day has climbed their way into becoming a Hall of Fame-worthy team by both their list of accomplishments and the level of popularity gained by fans.

Right before their matches, Big E excites the crowd, wherever they are, and motives them to “Feel the Power.”

Since their SmackDown in-ring debut as a trio in 2014, The New Day have acquired one the best resumes in pro wrestling history.

In addition to being seven-time tag team champions — two on WWE Raw and five on SmackDown — Kofi Kingston also made history by defeating Daniel Bryan at WrestleMania 35 to become the first-ever African-born WWE superstar to be champion.

No Star Could “Grab The Brass Ring” By Himself

Prior to the faction forming in 2014, the three superstars were attempting to proverbially “grab the brass ring.” Although Kofi Kingston had multiple reigns as United States Champion and Intercontinental Champion, he constantly was pushed down to the midcard and upper midcard level. In fact, Kingston generally became known for his acrobatic saves at Royal Rumble events every year.

Big E has a successful career in NXT, and debuted as Dolph Ziggler’s muscle, attacking John Cena in 2012. He would eventually break away from Ziggler and turn babyface, winning the Intercontinental Championship in 2013 after defeating Curtis Axel. That was the peak of his singles career, as he would go on to have a subpar win-loss record.

Xavier Woods had a few appearance on the main roster with R-Truth, but never really propelled from there. However, he found a proverbial diamond in the rough when he aligned with Kofi Kingston and Big E.

The trio started off as babyfaces, but soon became booed from the crowd due to their “power of positivity” gimmick. However, the trio began to develop an even stronger character as heels, and the fans started to change their minds about disliking them. This would lead to a babyface turn again, and they haven’t looked back since.

The biggest achievement of The New Day as a team is that they now have the record of being the longest-reigning tag team champions in WWE history, breaking the 478-day record of Demolition in 2016. This record lasted for nearly 30 years before The New Day closed their reign out at 483 days from August 23, 2015 (SummerSlam) to December 18, 2016 (Roadblock: End of the Line).

Their most recent tag team title win occurred on November 8. 2019, as they closed out the decade by defeating The Revival and claiming the WWE SmackDown Tag Team Championship. They retained it for nearly four months before losing to The Miz & John Morrison at Super ShowDown.

Kofi Kingston had a chance to regain the titles in a triple threat ladder match at WrestleMania 36, but Morrison retained the title.

Kofi, Big E, and Woods have taken their popular outside of the ring as well. Woods has a successful video game YouTube channel, UpUpDownDown, and the trio now have a podcast, The New Day: Feel the Power.

Although the fans were not very high on them in the beginning, the unicorns, trombone-playing, and “booty-o’s” promoting led the crowd to start chanting “New Day rocks.” The New Day is a prime example of three wrestlers who proved to Vince McMahon that they can make the best out of a second chance to revive their careers.

There are few that are able to generate as much charisma as The Rock and Shawn Michaels, but The New Day have certainly put their names in the hat.

As a result of their success, The New Day is the best team of this generation, and have put themselves on the echelon of Roman Reigns, Seth Rollins, and John Cena as far as top WWE names of the past decade.