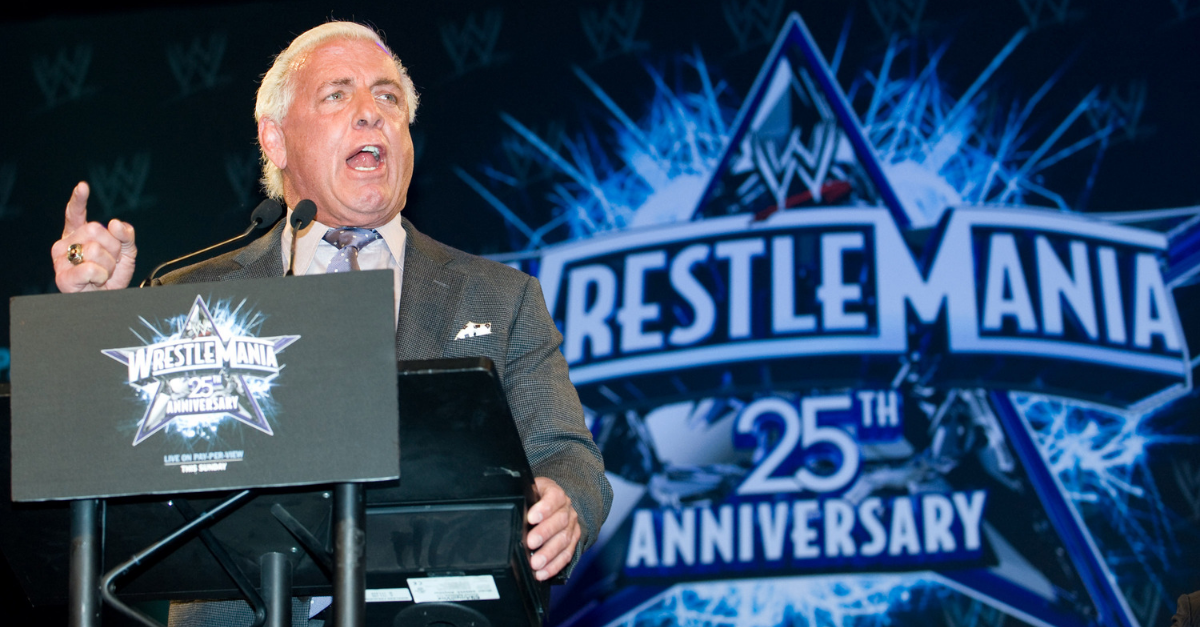 Ric Flair is undoubtedly one of the greatest wrestlers of all time. Being among the all-time greats for the National Wrestling Alliance (NWA) promotion, and as a top name for the Mid-Atlantic Championship Wrestling, Jim Crockett Promotions, American Wrestling Association, and World Championship Wrestling promotions all throughout the 1970s and 1980s, Flair’s charisma mixed with his devious charm and great in-ring work led him to be a superstar in not only North Carolina, but all around the world.

After runs with the Mid-Atlantic Tag Team Championship, Flair won his first singles championship in 1975 by defeating Paul Jones on February 8, 1975. However, 1975 was a tragic year of plane crashes.

Just a couple of weeks later, on February 20, ‘Playboy’ Gary Hart, Dennis McCord, Bobby Shane, and Buddy Colt were victims of a plane crash en route from Miami to Tampa. The plane crashed into Tampa Bay, and, unfortunately, Shane died in the crash at only 29 years old.

Ric Flair was even in a plane crash that same year as well.

Ric Flair survived a plane crash… and that crash inspired him to become the #NatureBoy. pic.twitter.com/1dp3Qq2aZw

The year of pro wrestling in 1975 continued to be catastrophic, as another plane crash occurred. This one, on October 4, 1975, involved Ric Flair, Johnny Valentine, Bob Bruggers, “Mr. Wrestling” Tim Woods, and promoter David Crockett. The twin-engine Cessna 310 plane was heading from Charlotte to Wilmington, North Carolina to head to their next show. Valentine, who was the United States Heavyweight Champion at the time, was the first to notice that the plane was running out of gas.

The plane crashed 100 yards short from the runway, just missing a water tower from the prison camp. Each passenger was seriously injured from the crash, and Valentine was forced to retire. Unfortunately, pilot Joseph Michael Farkas died two months later in the hospital.

Flair’s wrestling career could have also suffered this same fate, but thankfully, after breaking his back, he returned the beginning of the next year and resumed his role as a major name in MACW. After all, he had just won the Heavyweight Championship from Wahoo McDaniel. Flair also feuded with names such as Dusty Rhodes, Greg Valentine, got into a heated rivalry with Ricky Steamboat over the United States Championship, and wrestled several others before winning his first NWA World Heavyweight Championship from Dusty Rhodes in 1981.

After his first win as NWA World Heavyweight Champion, “The Nature Boy” started to carve his spot in professional wrestling history, winning the world title 16 times (Flair has reported this number to be low).  In addition to becoming a multi-time world champion in NWA and WCW, Flair also was one of the founding members of The Four Horsemen, which many would label as the greatest faction of all-time.

In addition to his success in WCW and NWA, Vince McMahon acquired the services of Flair when he departed from WCW, and he made his WWF debut in 1991. Capitalizing on Flair’s star power, he won the WWE Championship at the 1992 Royal Rumble match, before losing the title to Randy Savage at WrestleMania VIII. Flair would become WWE Champion again on an episode of Superstars. Flair’s second and final WWE Championship win ended by the hands of Bret Hart a little over a month later.

After returning to WCW in 1993 until its close in 2001, Flair returned to WWE and competed until retiring in 2008 after a match against Shawn Michaels at WrestleMania 24. Flair could not shake his desire to still compete in the ring, and joined the TNA brand. Among being the leader of the Fourtune faction, one of Flair’s most memorable storylines against Jay Lethal.

Being inducted into the WWE Hall of Fame in both 2008 and 2012, the career of Ric Flair as a professional wrestler could have been done in 1975, which would have left fans without experiencing over 30 years of rich history.

The infamous plane crash could have changed much of what occurred over the last three decades, but thankfully, Flair was able to fully recover and become arguably the most decorated name in pro wrestling history.