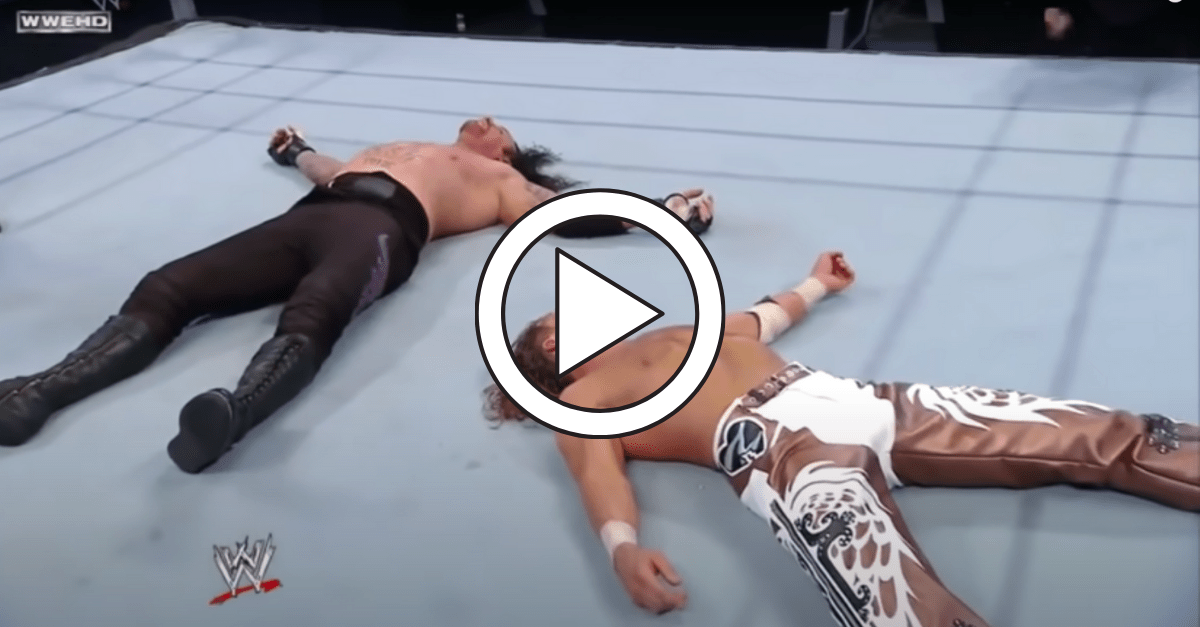 “The 25th Anniversary of WrestleMania” demanded professional wrestling’s biggest names and greatest in-ring performers at their best. Reliant Stadium in Houston, Texas, played host to “The Showcase of the Immortals” on April 5, 2009, and the build up to WWE’s flagship pay-per-view roped in storylines for many icons, past and present, hoping to make the show a resounding hit.

When the lights went down, WrestleMania 25 ultimately left a lot of fans unsatisfied. Much of that was attributed to a nearly-identical list of the Raw, Smackdown and ECW superstars who appeared at WrestleMania 24, plus a 10-minute Kid Rock concert during the show. (Let’s be real: Was there ever a good time to hear “Bawitdaba” at full volume?)

One match, however, stood tall above the rest and is heralded as the greatest match in WWE history.

The build up was pretty straight-forward: The Undertaker was in the midst of “The Streak” and hadn’t lost in 16-straight WrestleMania matches. Shawn Michaels, after defeating JBL and Vladimir Kozlov on back-to-back episodes of Raw, earned the right to challenge Undertaker and try to end the streak.

Right out of the gate, the match’s theatrical entrances set the table for an all-time classic ? Michaels descended from above, dressed in white to symbolize “the light.” Undertaker rose up from the floor, his daunting entrance music welcoming “The Deadman” back to WWE’s grandest stage.

The two superstars did not disappoint. Trading perfectly-executed blows, and even surviving a botched stunt involving a cameraman, HBK and Taker swung back and forth. Sweet Chin Music was sung over and over by Michaels. Undertaker delivered his patented Chokeslam, Tombstone Piledriver, and Last Ride finishing moves, only to see Michaels kick out time and again.

Over 30 minutes went by. (The match was reportedly only booked for 15. Glad they didn’t listen.) Then, HBK attempted a moonsault from the top rope only to be caught mid-flight by the 300-pound giant. One final Tombstone put the nail in the coffin, moving Undertaker’s WrestleMania record to 17-0.

“One of the things I will say is that after that match, Shawn and I came through the curtain and we walked through and everybody is clapping and everybody is giving a standing ovation and Hurricane Helms was standing right there and I?ll never forget what he said. He said something like, ‘Oh my God, if there is a mercy rule in pro wrestling right now they might as well pull the mercy rule because nobody is going to follow that.'”

Two of WWE’s biggest wrestlers in the twilight of their Hall-of-Fame careers delivered a knockout performance. The bout garnered numerous accolades as Match of the Year from Pro Wrestling Illustrated, Wrestling Observer Newsletter, and claimed top honor at the 2009 WWE Slammy Awards.

A WWE title wasn’t on the line, nor was this match considered a PPV main event. Still, WWE.com ranked the the bout No. 1 among the 100 best matches of all time.

The following year, HBK and Taker met again at WrestleMania 26 in a “Streak vs. Career Match.” The Undertaker won and pushed his streak to 17-0. As a result of the pre-match stipulations, Shawn Michaels retired from professional wrestling full-time.