The 10 Most Electric Ring Entrances in WrestleMania History 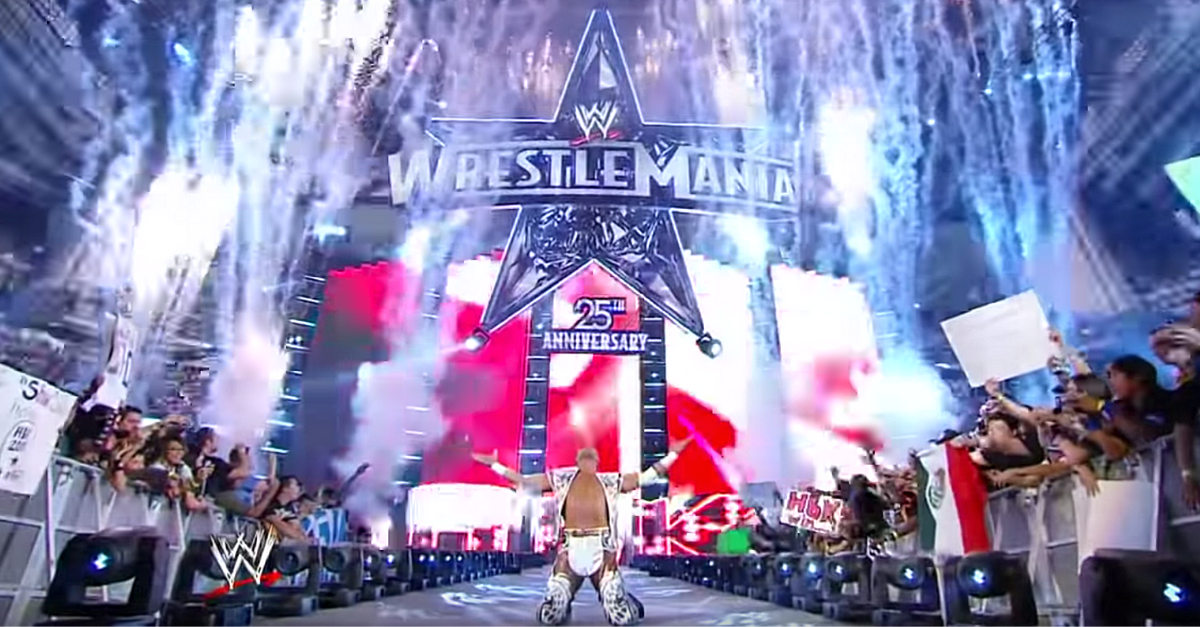 The NFL owns the Super Bowl, soccer might have the World Cup, but nothing compares to professional wrestling’s annual, iconic event at WrestleMania. For the last 30 years, millions of fans have packed arenas from the Pontiac Silverdome in 1987 through the record-setting 101,763 people who watched WrestleMania 32 at AT&T Stadium. There’s just nothing quite like “The Showcase of the Immortals.”

Over the years, WWE superstars saved their greatest ring entrances for “The Show of Shows” and did it in grand style. There are 34 different events and hundreds of entrances to choose from, but these are 10 of the greatest WrestleMania entrances of all time.

While it wasn’t an official match, any time three Hall of Fame wrestlers team up for a triumphant return, it’s going to make an all-time great list. After The League of Nations ? King Barrett, Sheamus, Alberto Del Rio and Rusev ? defeated WWE Tag Team Champions The New Day (who also had an incredible entrance), Barrett claimed no three men could beat them.

That’s when Mick Foley, Shawn Michaels and “Stone Cold” Steve Austin emerged, then embarrassed The League of Nations by scattering them like flies.

Give me a pink Cadillac driven by Diamond Dallas Page, Jimmy Hart, and the legendary tag team of The Honky Tonk Man and Greg “The Hammer” Valentine ? better known as Rhythm & Blues ? anytime, anywhere, any place.

WrestleMania 30 at the Mercedes-Benz Superdome started in style with Triple H facing Daniel Bryan, where the winner would be entered in the triple threat main event match for the WWE World Heavyweight Championship later that night.

The Game always had a knack for the dramatic, but his entrance at WrestleMania 30 alongside WWE Diva’s Sasha Banks, Charlotte Flair, and Alexa Bliss — all of whom were still being developed at the time — was simply his best. “The King of Kings” arrived at Mania wearing a gold helmet, gold-plated armor and a red cape, but missed his opportunity to claim another title that night.

Personally, John Bradshaw Layfield is one of my least favorite wrestlers of all time, but he sure knows how to make an entrance. Prior to losing his WWE Championship title to John Cena, JBL arrived in a white limousine complete with a police escort while $100 bills with his face on them rained down on the Staples Center crowd in Los Angeles.

He was only a commentator for WrestleMania IX at Caesars Palace, but, boy, did the Macho Man make his way to the broadcast booth in STYLE. While being carried on a bed and decked out in the king’s color of purple, Savage was fed grapes while rose petals were thrown ahead of him. The saying goes “kings stay kings,” but there’s no king quite like Randy Savage.

Prior to arguably the greatest WrestleMania match of all time, the Heartbreak Kid descended from the heavens to angelic hymns wearing an all-white attire, which countered The Undertaker’s rise from the the floor surrounded by flames. It took Undertaker delivering the Last Ride, a chokeslam and two Tombstone Piledrivers to finally pin Michaels and move his undefeated WrestleMania record to 17-0.

In the same Mania where Floyd Mayweather defeated Big Show, it was a Career Threatening match between Shawn Michaels and his long-time idol Ric Flair that we remember most. The Nature Boy entered the arena wearing a sequin blue robe, complete with fireworks, as his iconic “Wooo” chant rang out from the fans. If you haven’t seen the dramatic end to this match, it’s one of the best send offs in wrestling history.

What’s better than one John Cena? How about almost 100 of them wearing the exact same thing to welcome the future WWE Hall of Famer? Cena delivered one of his best matches ever, defeating both Edge and The Big Show to win his second WWE World Heavyweight Championship at The 25th Anniversary of WrestleMania.

For weeks, Kane assumed The Undertaker was buried alive several weeks before Mania. However, The Deadman returned to face his brother at WrestleMania 20, and he did it by ditching the biker gag that had gone on long enough. Led out by Paul Bearer, Undertaker “returned from the dead” to defeat an unmasked Kane and push his undefeated record to 12-0.

Nothing will ever top HBK’s zip-line entrance into WrestleMania 12, and you’ll never convince me otherwise. High above the Arrowhead Pond, Michaels came swooping in on the ride of a lifetime and landed right in the middle of the crowd. No wrestler ever did it like Shawn Michaels, and maybe, no one will ever do it again.