The World Cup is here, and players are now in Qatar kicking off the tournament for their nations. Much of the pre-tournament spotlight was on a select few individuals who look likely to make the 2022 World Cup their last major international tournament. Many assume Argentina's Lionel Messi will play in the last World Cup of his career in Qatar, and this might be the last shot for Belgium's aging "Golden Generation." Likewise, the smart money would be on 37-year-old Cristiano Ronaldo of Portugal hanging up his boots before 2026, especially in light of recent interviews. But there is another 37-year-old former Ballon d'Or winner who will look to pull the strings for his football-crazed nation one last time. 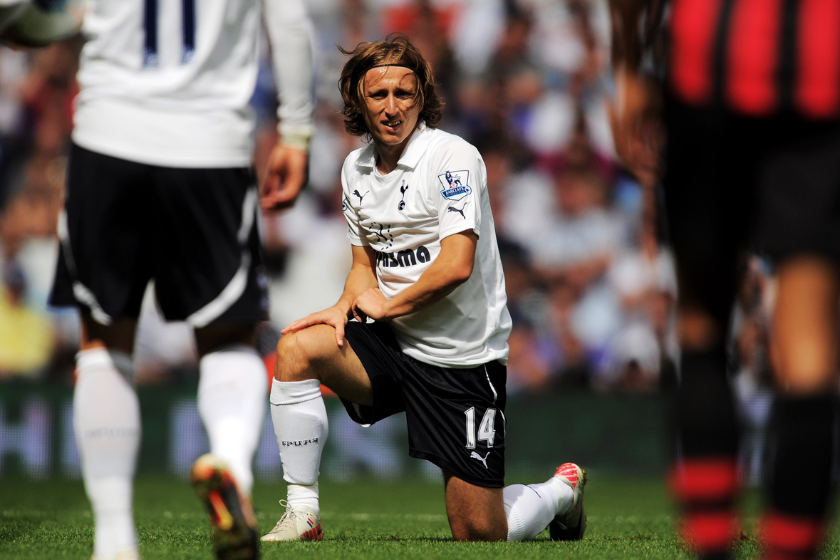 That could equally describe the country of Croatia and its star midfielder, Luka Modri?. The Real Madrid superstar's game greatly eclipses his 5-foot-8-inch frame. Modri? grew up as Croatia was fighting for its independence. As a child, he ended up a refugee and lived in a hotel for seven years. He would begin playing football in the parking lot, mainly as a means of distraction. Eventually, at the age of 16 in 2001, he signed to Dinamo Zagreb's youth academy. After a year with the youth team, Modri? was loaned to Zrinjski Mostar in the Bosnian Premier League. It was here that the young Luka started to develop his do-everything-on-the-pitch versatility, and he learned how to play in a physical style despite his diminutive stature. Following that loan -- and another loan to Croatian side Inter Zapre?i? the following season -- Modri? signed a 10-year contract with Dinamo Zagreb's senior team in 2005.

He would only play three of those seasons, however, as the Croat would complete a transfer to the Premier League in 2008 to play for London-based Tottenham Hotspur. In his years in London, he would start to become a top midfielder, helping Spurs reach the UEFA Champions League in 2010 for the first time in club history. In the summer of 2011, Modri? tried to force a move to London rivals Chelsea FC. While ultimately unsuccessful in securing a cross-town transfer, he did leave London in the summer of 2012. 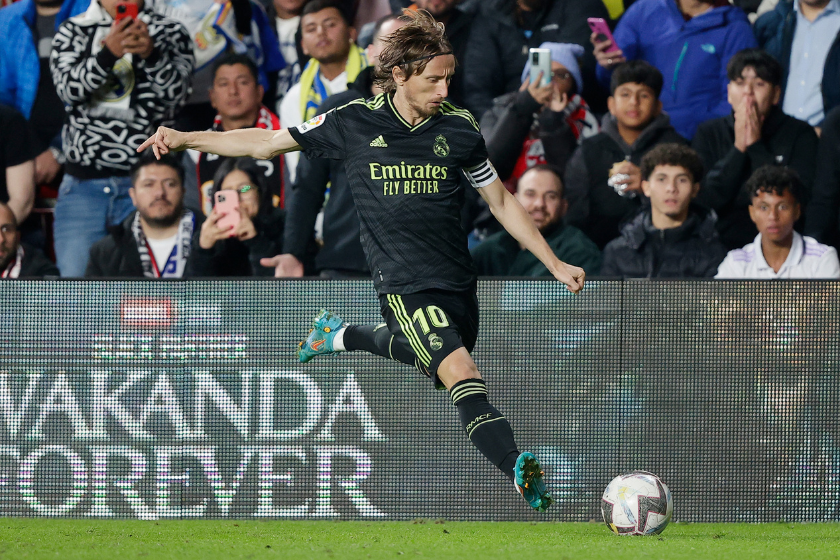 In August 2012, Real Madrid signed Modri? and, less than two days later, he was substituted into the Supercopa de España against rival Barcelona FC late in the second half. Real Madrid would go on to win, and Modri? would win his first trophy with Los Blancos mere hours after being announced for the club. This would set the stage for the next decade of football for the midfielder and would be just the first piece for an impressive trophy cabinet.

It took almost an entire season for Modri? to break into Real Madrid's regular starting XI. But once he did, not only has he entrenched himself as one of the first names on the team sheet, but he also has developed into one of the best midfielders in the entire world. During his time at Santiago Bernabéu Stadium, Luka has racked up titles. Since he joined, Madrid has won four Supercopa de España, four UEFA Super Cups, four FIFA Club World Cups, three La Liga titles, one Copa del Rey, and a staggering five UEFA Champions League titles. When asked in the summer of 2021 about looming contract negotiations between Real Madrid and Modri?, legendary manager Carlo Ancelotti said, "Luka Modri? has not signed the contract renewal yet, but he practically has a lifetime contract with Real Madrid." That type of praise is reserved only for the truly elite. But Modri?'s success doesn't just extend to his club career. 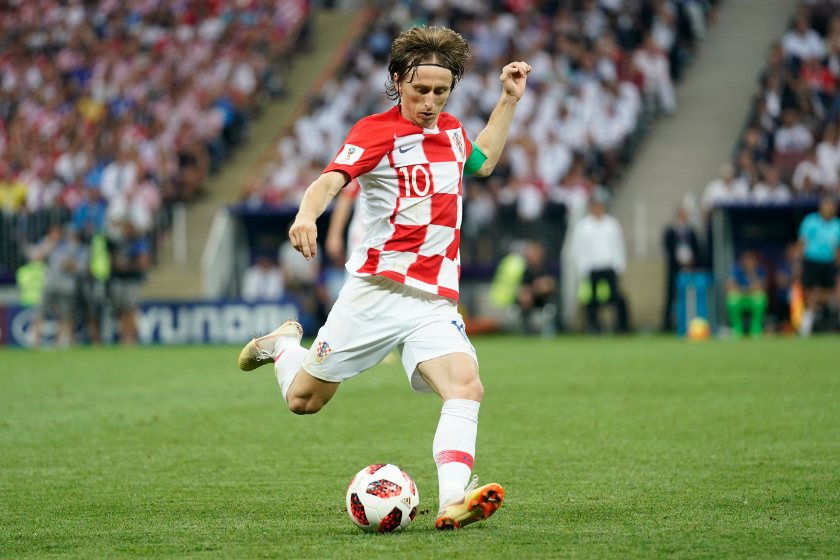 His play style can best be described as all-encompassing and highly technical. Able to win the ball back and hold possession under pressure, it's virtually impossible to fluster Modri?, who is always in control of not just the ball but also the tempo of the match. A playmaker with unmatched creativity, Modri? not only always seems to know the right pass to make, but he also completes those passes at an impossibly high rate. And when a pass isn't the right move, a curling, pinpointed, long-range shot will often find the back of the net off of his foot. The Keira Knightley film may have made the phrase "Bend it like Beckham" popular, but "Launch it like Luka" should be said just as often.

It is with that wealth of talent -- and club success -- that Luka was named captain of the Croatian team heading into the 2018 World Cup in Russia. Matched up in a group with Argentina, Iceland and Nigeria, the Balkan nation was expected to advance but not necessarily win the group. But behind the buildup play of Modri?, as well as his success on set-pieces and from the penalty spot, Croatia won all three of its group stage matches and won its group, with many outlets naming Modri? the best player of the Group Stage. Once in the knockout rounds, Modri? would continue to dictate the matches' play at the pace that Croatia preferred. Every single match on the way to the Final headed to extra time; and both the Round of 16 match against Denmark and the quarterfinal against host nation Russia headed to a penalty shootout, where naturally Luka converted his PK.

Heading into the final, Modri? had completed more passes in the opposition's half, run more miles, played more minutes and had more successful dribbles than anyone else in the tournament, all with little to no flash. It could be all those minutes that led to Croatia falling to the powerhouse that was the 2018 France team in the Final just as much as it was the emergence of Kylian Mbappe. But no single player had a better tournament, or year -- if you factor in how high Real Madrid was flying -- than Modri?. Just look at all of the awards Modri? won in 2018: Ballon d'Or, FIFA World Cup Golden Ball, FIFA World Cup Fantasy Team, FIFA World Cup Dream Team, World Soccer Player of the Year, AIPS Athlete of the Year, ESPN Midfielder of the Year, UEFA Team of the Year, UEFA Champions League Midfielder of the Season, UEFA Men's Player of the Year Award, Best FIFA Men's Player, IFFHS World's Best Playmaker, IFFHS Men's World Team, and more. Oh, and just as he did in 2007, 2008, 2011, 2014, 2016, 2017, 2019, 2020 and 2021, he won the Croatian Footballer of the Year award.

On to Qatar for Luka Modri? and Croatia 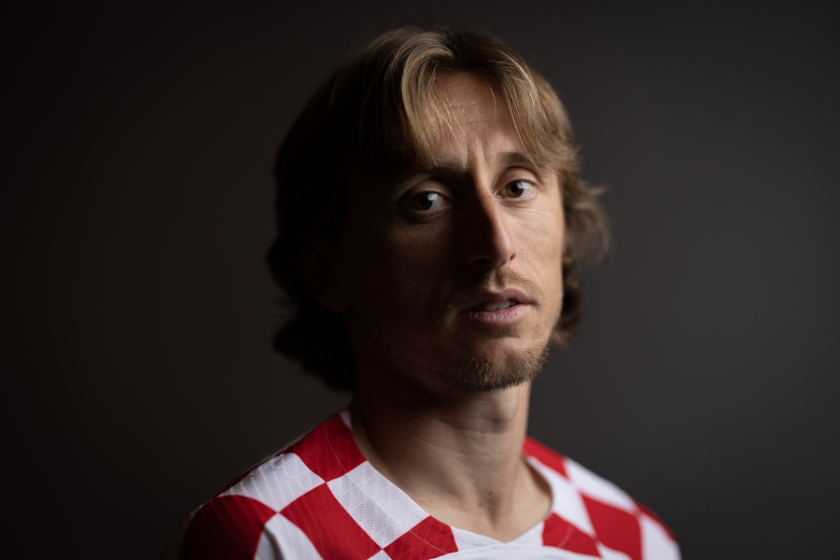 At 37, Luka Modri? has already said that Qatar will his final World Cup -- to little surprise. But while there are questions about many of the other older players, Luka is still playing at an elite level. He just helped lead Real Madrid to another Champions League title and was named to the 2021/22 UEFA Champions League Squad of the Season. In World Cup qualifying, Modri? scored three times and notched two assists in seven appearances for Croatia. And with a group that includes that aging Golden Generation of Belgium along with Canada and Morocco, Croatia is once again expected to proceed to the knockout stages of the World Cup.

With Modri? at the helm, it would not shock anyone if he led Croatia to surprising heights. If the list above didn't make it clear, Modri? is the greatest Croatian footballer of all time. And, truthfully, he may not even need success at this World Cup to be counted among the greatest world midfielders ever. No matter what, we know this is the last time we will see Luka Modri? play on the biggest international stage. It would be a shame to miss a single minute.

MORE: France Looks To Repeat As World Cup Champions. Can They Do It?