The day has finally arrived. The wait for Qatar 2022 is over. We've taken a look at each of the groups that will be competing for the trophy, as well as some of the biggest names in the sport who are assembled in Qatar. Today, though, I'd like to focus on the World Cup Stadiums, where the Supreme Committee decided to thwart FIFA's deal with Budweiser, making a U-Turn on their previous agreement to allow the sale of alcohol in the stands and surrounding areas. There are eight separate venues that will host the tournament, from the kickoff game between Group A's Qatar and Ecuador, all the way through the final, where a champion will be crowned. This will be the first time the tournament will be played in the Middle East and hopefully not the last time a Middle Eastern nation hosts the global competition.

Whether you're a supporter of Brazil, England, Argentina, Portugal, Belgium, Senegal or Wales, these are the stadiums where the world's greatest soccer players will be creating legendary moments. 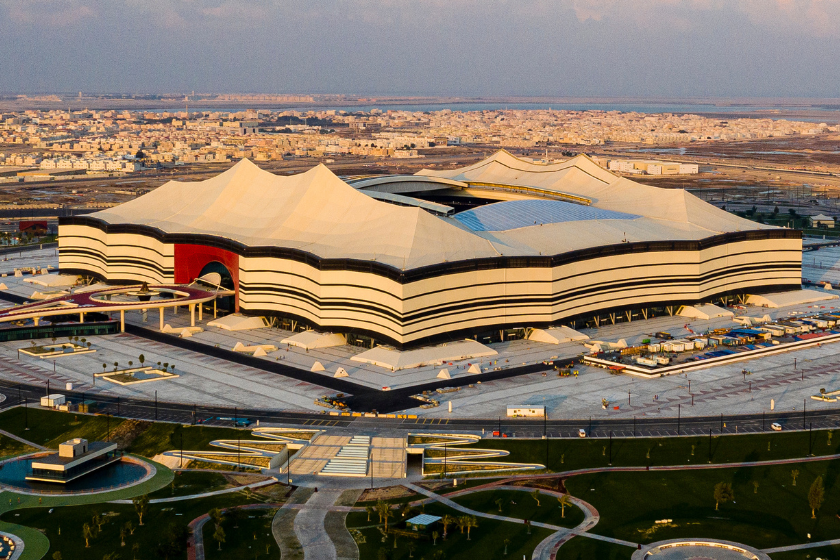 Located in Al Khor City, about 35km north of the capital, Doha, the Al Bayt Stadium seats 60,000 and was built with sustainability and a nod to the country's culture. The tent-like structure designed by Dar reflects the bayt al sha'ar tents used by nomads across the nation. Construction began on the stadium in 2015 and it officially opened in November of 2021, playing host to an Arab Cup match. The roof is also retractable, which should come in quite handy. Nine matches, ranging from the opening match to additional group stage matches to a semi-final, will be played on the pitch at Al Bayt Stadium. After the tournament, the upper tier will be removed and the seats repurposed for sporting infrastructure in other countries. Ultimately, a luxury hotel is planned for the site after the World Cup is completed. 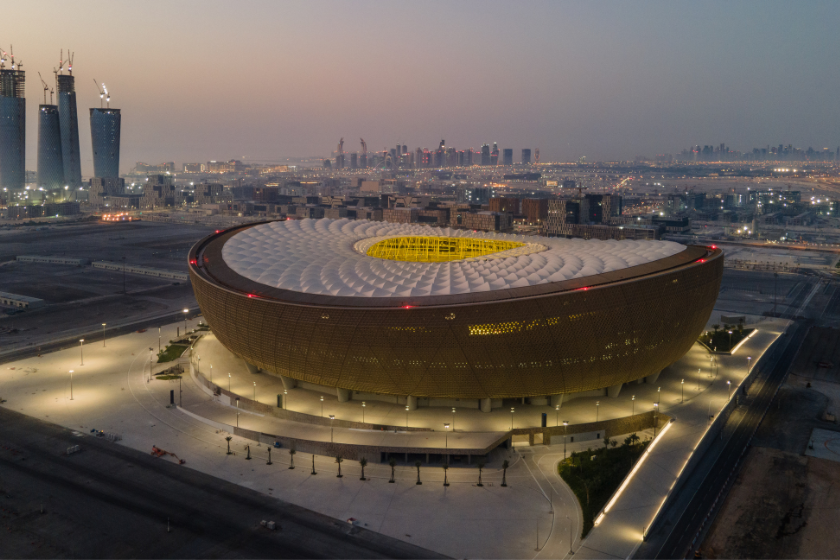 Slightly closer to Doha (about 20km north) lies Lusail city, whose stadium has the honor of hosting the World Cup final match. Just like Al Bayt Stadium, the design draws inspiration from the region's culture. Hand-crafted bowls found throughout the Arab and Islamic world are the model for the exterior design and overall concept, executed through a collaboration of multiple firms. UK firm Foster & Partners (who, along with sports architect Populous, worked on the redesign of London's Wembley Stadium) teamed up with structural engineering firm Arup to create this golden bowl that seats 80,000 spectators. The project got underway in 2017 and recently hosted the Saudi-Egyptian Super Cup, a final dress rehearsal before Qatar 2022. After a champion is crowned, the site will be repurposed as a community space featuring shops, leisure, and sports facilities. 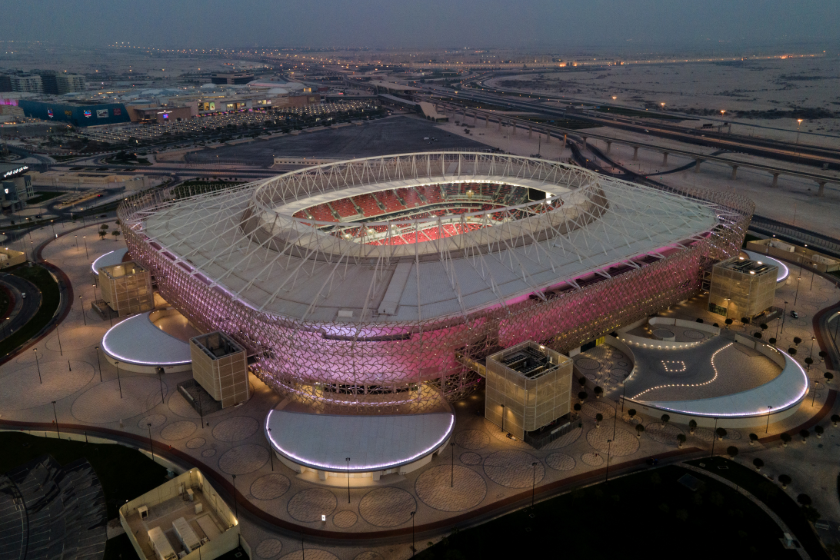 Umm Al Afaei, 20km to the west of Doha, is the site of Ahmad Bin Ali Stadium, referred to as the "gateway to the desert". The stadium is the home of Al Rayyan SC. The existing stadium was originally in line for renovation, but ultimately an entirely new one was erected between 2016 and 2020. More than 80% of the construction material for the new stadium was from the old one, and some of the surrounding landscaping was preserved as well. The 40,000 seat capacity for the World Cup will be reduced by 50% after the tournament. Seven matches will take place at the stadium over the course of the tournament. 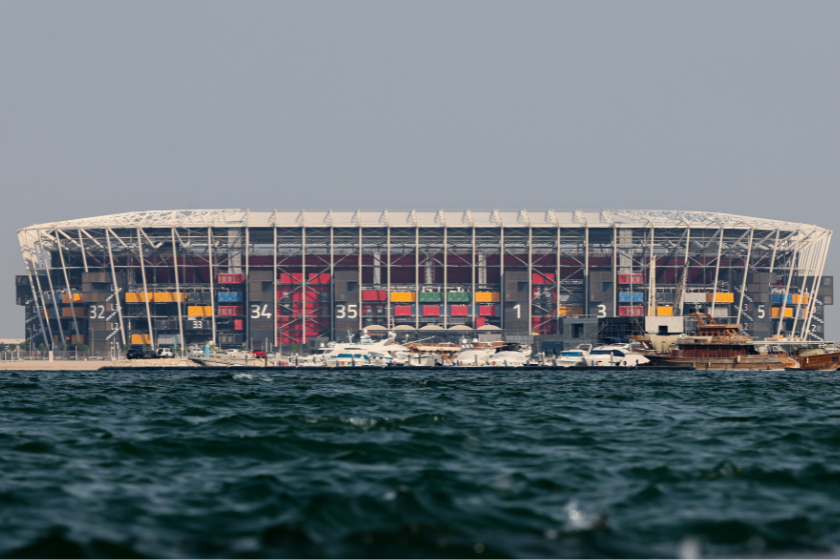 This ranks among one of the most interesting designs I've ever encountered. The name of the stadium, located in Ras Abu Aboud (10km east of Doha), refers to Qatar's international dialing code. It's also the exact number of shipping containers that were incorporated into the overall design, which will be entirely dismantled and repurposed after the World Cup trophy is awarded. It is an homage to the seafaring and worldwide trade history of Qatar. It's no coincidence that the stadium is nestled portside, allowing spectators to enjoy the breeze from the Arabian Gulf. Construction started in 2018 and was finished in 2021, playing host to an Arab Cup group match that November. The seven matches slated for World Cup 2022 will be the last ones played in this 40,000 seat temporary venue. 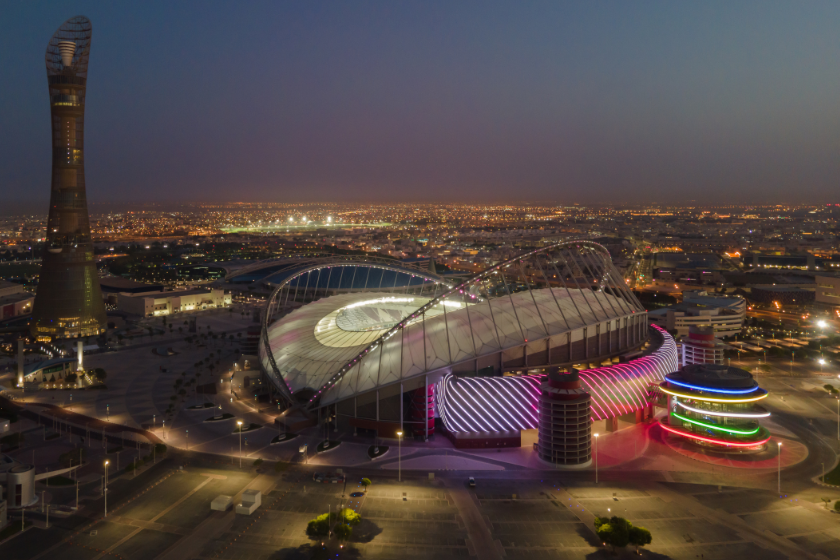 Originally constructed in 1976, the Qatari national stadium was given a facelift ahead of the FIFA World Cup. It reopened in 2017 with an additional 12,000 seats - expanding to its current 40,000 seat capacity. It was the first of the eight stadiums to be ready ahead of the tournament. The site has played host to numerous competitions over the years, and will continue its tradition beyond Qatar 2022 as well. 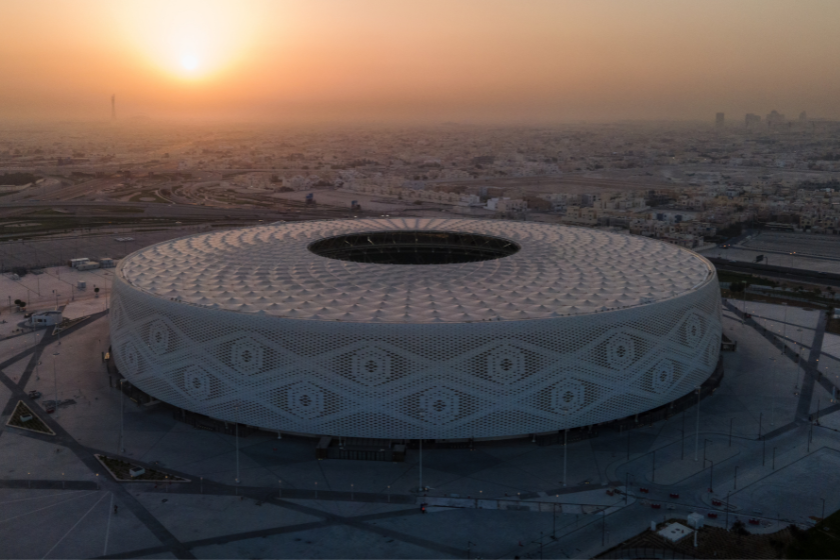 Ibrahim Jaidah designed this stunning 40,000 seat stadium based on the gahfiya - a traditional woven cap worn by men and boys all around the Arab world. It is named for a tree local to the area. The venue opened in late 2021, hosting the Amir Cup final between Al-Sadd and Al-Rayyan. It was also the stadium where the innovative cooling system that will be used was unveiled for FIFA, helping convince the organization that Qatar would be able to host the tournament despite the climate challenges of the region. Roughly half of the seats will be removed after the World Cup and a hotel is planned, with rooms directly overlooking the pitch. 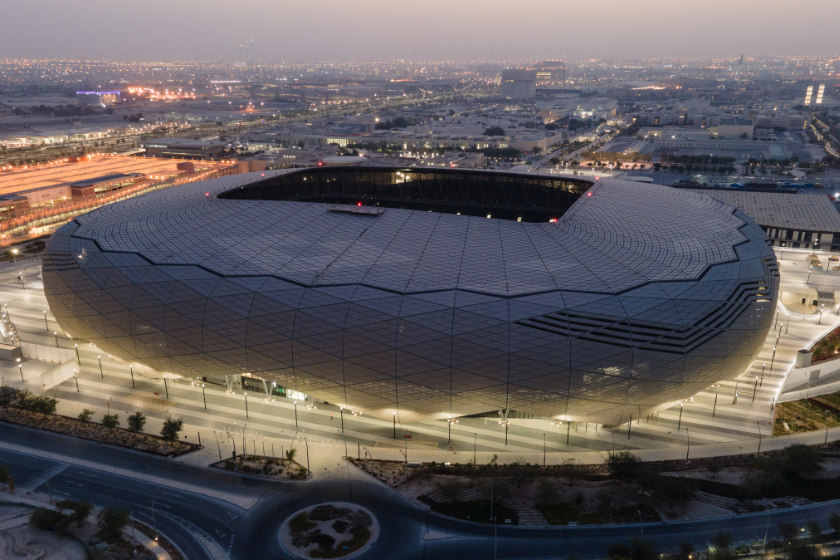 Just 7km to the northwest of central Doha, the Education City stadium in Al Rayyan sits at the heart of Qatar Foundation's Education City campus where eight branch campuses of some of the world's best universities. It's referred to as a "diamond in the desert" thanks to the pattern on the facade. One of the quarterfinal matches will take place on its itch. It will be converted into a sports hub for the surrounding community and universities, while the capacity will be reduced by roughly 20,000. Some parts of the building will be converted into classrooms and event spaces. It is the first stadium to be awarded a five star rating by the Global Sustainability Assessment System (GSAS). 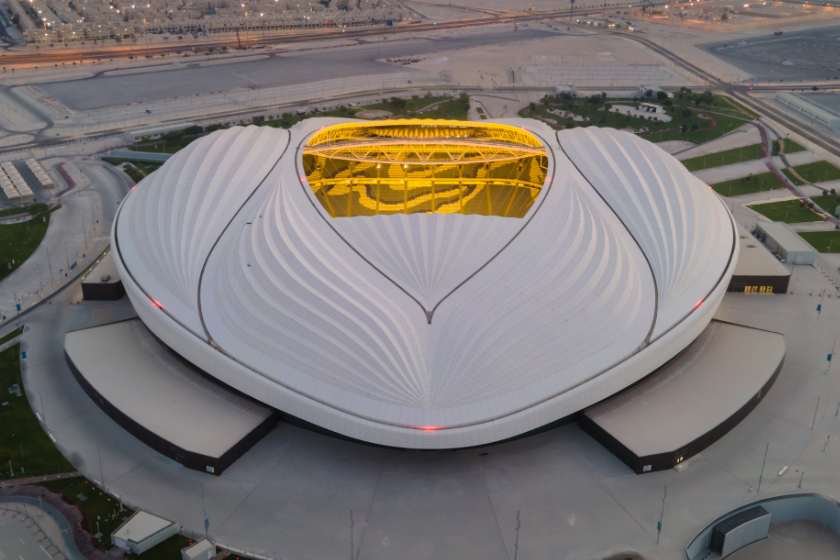 The city of Al Wakrah, 22km south of Doha, is the site of the Al Janoub Stadium. The design of the stadium reflects the sails of the traditional dhow boats which populate the city's harbor. It features a fully retractable roof, keeping spectators cool and allowing for year-round use of the venue. Like the other venues, capacity will be reduced following the World Cup. The stadium will serve as the home of Al Wakrah Sports Club.

Despite all of the controversy surrounding the FIFA World Cup Qatar 2022, the octet of venues that will host the tournament span a wide array of architectural design concepts and sustainability features that will continue to be talked about for years to come. 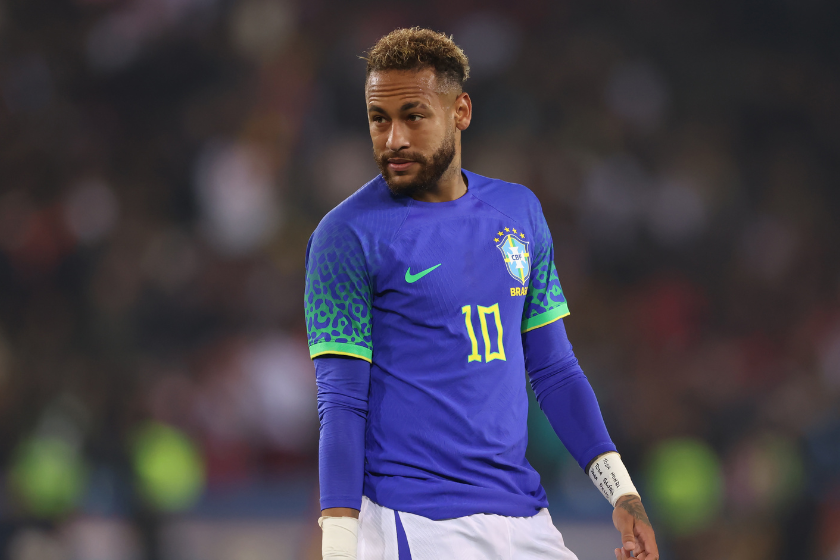 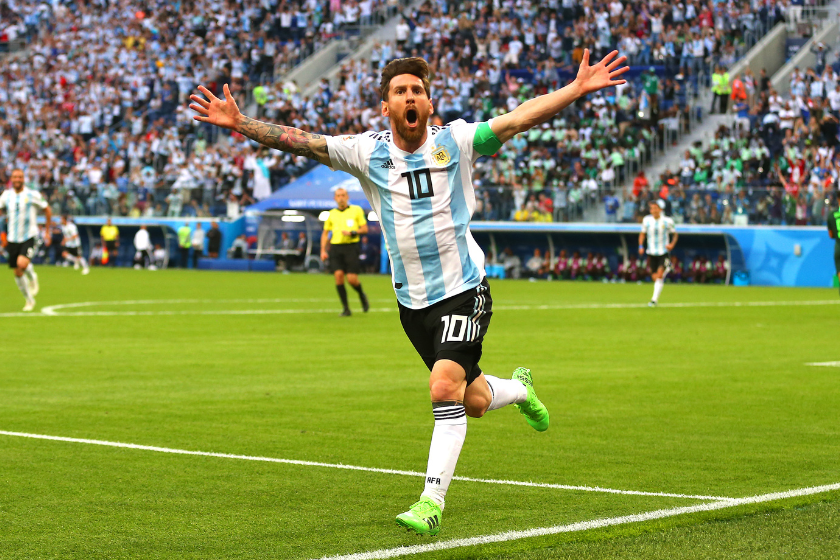