The University of North Carolina is known for its Division I championship pedigree in college athletics. Or at least that's true for men's basketball. But those hardwood Tar Heels are not the only team in Chapel Hill with a lasting legacy.

For decades now the Lady Heels have dominated the collegiate soccer landscape. If you, like me, were obsessed with the U.S. Women's National Team in the late 90's, you may have already known this. But, not many people were as obsessed with learning every detail about every player on that team so it's understandable that you might not know just how dominating they have been over the last 30 years.

But, why is that?

As we marked the 50-year anniversary of Title IX at the end of June, it's important to acknowledge just how monumental it was when it went into law. Essentially guaranteeing that women and girls had equal access to sports at every level as men and boys would forever change the landscape of both professional and amateur sports in not only the country but also the world. Finally, female student-athletes had equal footing. 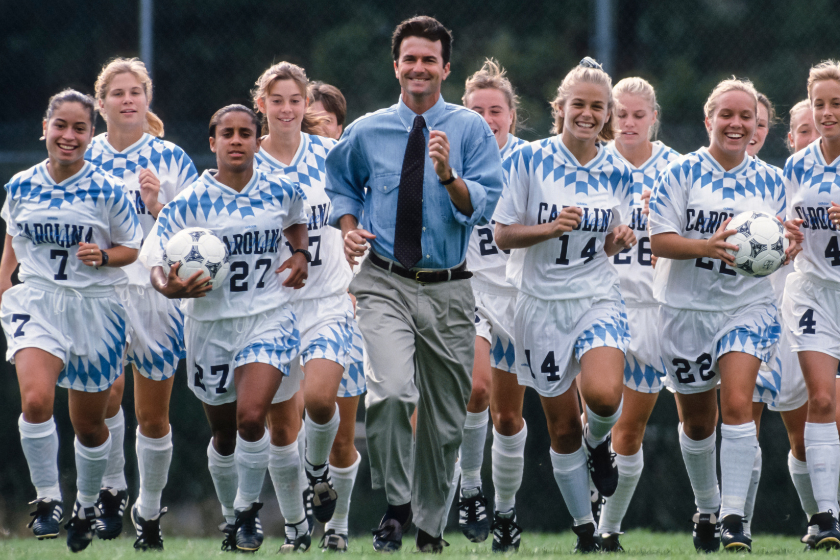 After forming a women's soccer club on campus, they petitioned the UNC athletic director to become an actual team in 1979. Coach Anson Dorrance, who was leading the men's varsity team at the time, was tasked with bringing the women's club up to a varsity level. It's been 45 years and he is still the head coach there. Current and former USWNT players credit their work ethic and championship mindset to Anson's coaching. Personally speaking, I lived and died by his most famous quote back in my athletic days:

"The vision of a champion is bent over, drenched in sweat, at the point of exhaustion, when nobody else is looking."

It evokes the memory of all of the legendary players he's coached over his 45 years as head coach.

Speaking of those players...here's a short list of the incredible alumni, from midfielder to goalkeeper, that have come from UNC Women's Soccer -- the winningest program in college soccer history:

If this list reads like the who's who of International soccer luminaries, that's because it is. No other college can boast as many champions as the Tar Heels can. UNC was so dominant in the last three decades that the NCAA Women's Soccer Tournament floated around North Carolina from Greensboro to Cary, where Raleigh-based North Carolina Courage of the NWSL play. 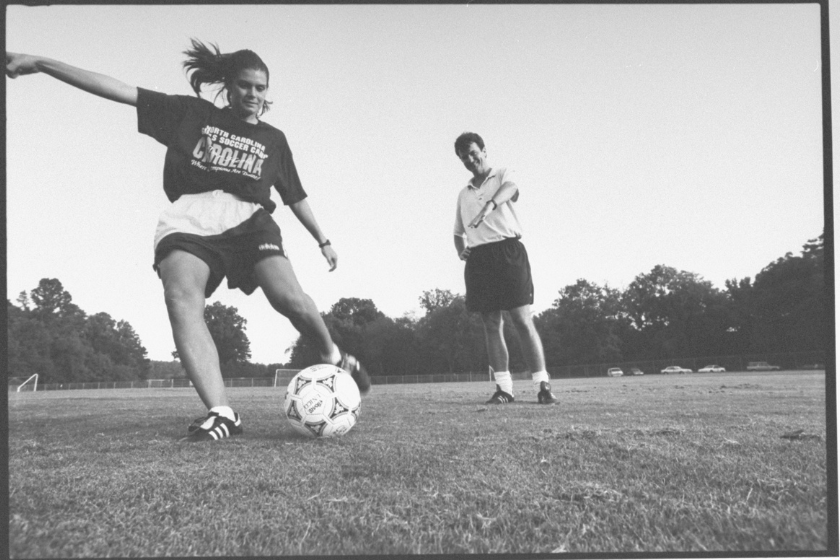 Photo by Will And Deni McIntyre/Getty Images

Only Stanford and USC come anywhere close. It also includes trailblazers both on and off the pitch. Cindy Parlow Cone is now the president of US Soccer. Yael Averbuch is the GM of Gotham FC. April Heinrichs was the first-ever captain of the USWNT and would go on to coach them for a few years in the early 2000's. Oh yeah, and arguably the greatest US player in history in Mia Hamm who is now a part-owner of Angel City FC.

When it comes to overall program history they are first by a long shot. The Tar Heels women's soccer have appeared in every NCAA women's soccer tournament since its inception and they have won 22 national championships in that time. Dorrance has been named ACC Coach of the Year 10 times and National Coach of the Year seven times. It's a winning culture that can only rival or maybe even surpass their men's basketball team's. And they've accomplished it in an even shorter window of time than the men.

So, given their illustrious history, why have we not heard more about this team and this program until now? Women's college basketball and softball have made their way onto a national stage with their tournaments being broadcast on networks such as ESPN. But for a country that is as proud of the dominant force that their Women's National Team is on the worldwide stage, we barely pay any attention to the sport on the smaller scale whether it be in college or even the NWSL.

The USWMNT Has Proven That Women's Soccer Can Work Everywhere 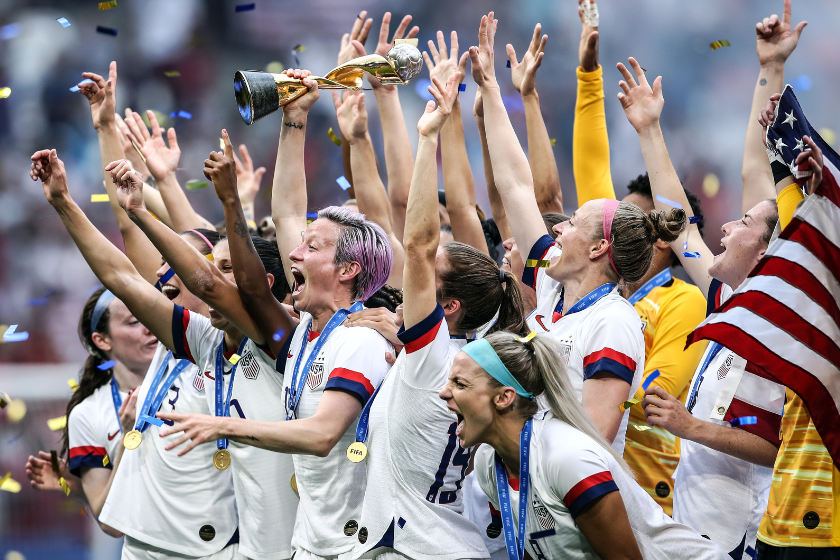 The NWSL is growing in popularity by the minute but you still have to dig a little deeper than you would to find even an NWSL game. Most of their games are streamed on twitch or Paramount +, which not everyone has access to. Given all of the league's growth in the last few years, there are still many major markets where girls can't just go watch a game in person, and as we've witnessed over the last 25 years, representation matters. Especially on the smaller scales.

Soccer is and always has been a grassroots sport. The more that young girls see all the possible opportunities that they can reach for the better. Only a few months ago, over 91,000 fans at Camp Nou watched Barcelona Women beat Wolfsburg in the first leg of their Champions League semi-final, setting an attendance record for the club. You can't tell me that the market is not there on every level. Women's soccer can be a massive success, not just stateside, but also worldwide.

The USWNT have long been trail blazers. Just recently they finally reached a new agreement with U.S. Soccer for equal pay for both the men's and women's teams. The success of the USWNT has pushed other federations to strengthen their women's sides so they can compete on the same level and the gap is certainly narrowing between the top world clubs.

But the success of these teams doesn't just appear out of nowhere. Women's academies, like the largest men's teams, have are starting to pop up overseas. However, the U.S. is behind once again in cultivating women's sports, as colleges and high schools are still the main pools to pull from. Even with the emergence of young stars like Olivia Moultrie signing a professional contract with the Portland Thorns at 15.

It's Up to the Fans to Keep Lifting Up Women's Soccer 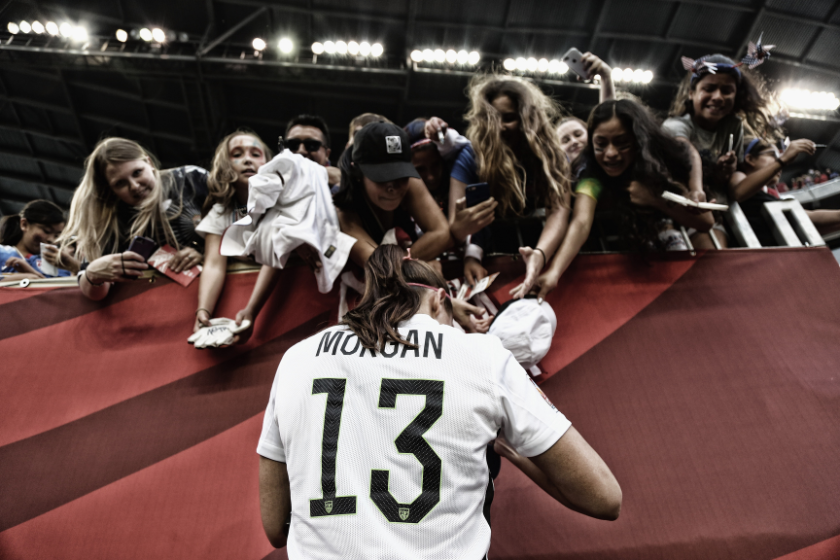 If this were the UNC men's basketball team, we would never hear the end of how many titles they've won. And unlike the men's basketball team, whose second-place finish at this year's NCAA Tournament was lauded as a success, no one mentions the heart-breaking defeat the UNC women suffered in 2022, losing to South Carolina in the opening round. Florida State would eventually win the national title.

As a nation, we love dynasties in sports and we have one of the biggest right here that has gone virtually unacknowledged until this point. If Alabama football and Duke basketball are the feeder schools to the NFL and the NBA, then UNC is the feeder school to not only the NWSL, WSL, and other professional women's soccer leagues, but also to the USWNT. When it comes to women's soccer in the United States, the conversation starts and ends with North Carolina, and we should be talking about them a whole lot more. We can start with the most recent Tar Heels players like Maycee Bell and Claudia Dickey, who are just getting started.

MORE: San Diego Wave FC is Ready to Change the Tides of the NWSL