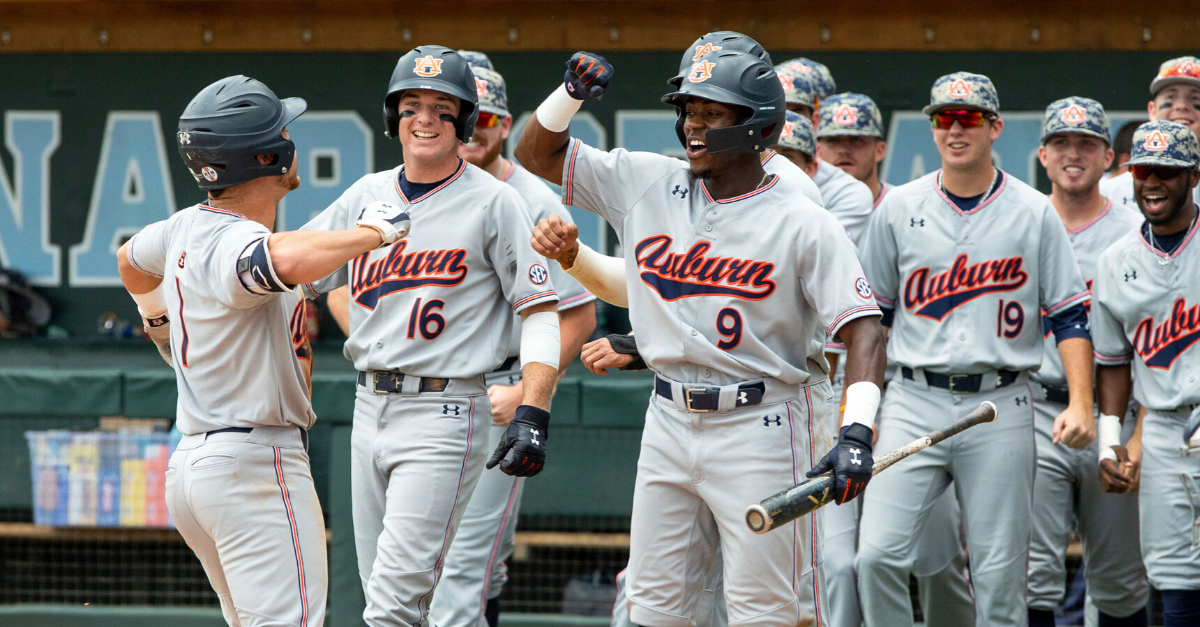 Editor’s Update: The 2020 baseball season was canceled due to the spread of COVID-19 and coronavirus outbreak. Auburn finished the shortened season with a 13-5 record.

The Auburn Tigers baseball team exceeded everyone’s expectations in 2019. They finished 38-28 and their Cinderella story included a 13-run inning that propelled them to their first College World Series appearance since the days of Tim Hudson and David Ross in 1997.

Hudson returned to the Tigers this year as the team’s pitching coach, and he and head coach Butch Thompson have big plans for an Auburn baseball team that checks in at No. 9 in the NCAA preseason rankings this spring. The Tigers return of a ton of starters from last year’s team, so there’s no reason they can’t rely on experience in 2020.

Auburn’s offense wasn’t spectacular last season and they lost power threats Edouard Julien and Will Holland, but there’s still reason to believe the Tigers can plate enough runs to keep pace in the SEC. Conor Davis (.290, 8 HRs) and Steven Williams (.247, 9 HRs) will supply the home runs, but players like Ryan Bliss (.281) and Judd Ward (.272) will have to help anchor the offense.

Luckily for Hudson, he’ll have a bevy of pitching talent to mold this season.

"Hopefully I can be the type of coach that impacts them both on and mostly off the field."

The Tigers’ rotation will be headlined by Tanner Burns, who is a top-30 MLB Draft prospect and possess a lively low-90s fastball and a wipeout slider. He struck out 101 batters over 79.2 innings and maintained a 2.82 ERA a season ago.

No. 2 starter Jack Owen figures to also be solid on Saturdays. He may not be the power pitcher Burns is, but he mixes up three pitches well and pitched well last year for Auburn (4-2, 2.75 ERA).

Auburn can also say they’re home to one of the SEC’s elite closers in Cody Greenhill. He posted 12 saves last year and features a fastball that can top 97 mph, which is why he earned Preseason Second Team All-America honors by the NCBWA.

The SEC won’t be easy this year. The conference features a plethora of top teams, including No. 1 Vanderbilt, No. 4 Georgia, No. 5 Arkansas, No. 6 Mississippi State, No. 10 Florida, No. 12 LSU, No. 21 Texas A&M and No. 23 Ole Miss. But if all holds up for the Tigers, they could make a deep run in the SEC Tournament and NCAA Tournament.

The Tigers will take the field at Plainsman Park as the home team in 37 of their 55 regular -season games, and they don’t hit the road until more than a month after their season opening series against Illinois-Chicago the weekend of Feb. 14.

The Tigers will also play 12 midweek games over the course of the season, starting with a home bout against Oakland on Feb. 18 (Tue). They don’t play an away midweek game until March 31 against UAB in Birmingham.

You can watch most of Auburn’s games on SEC Network and SEC Network+ on your Apple and Android devices or whatever else you can find with a screen.