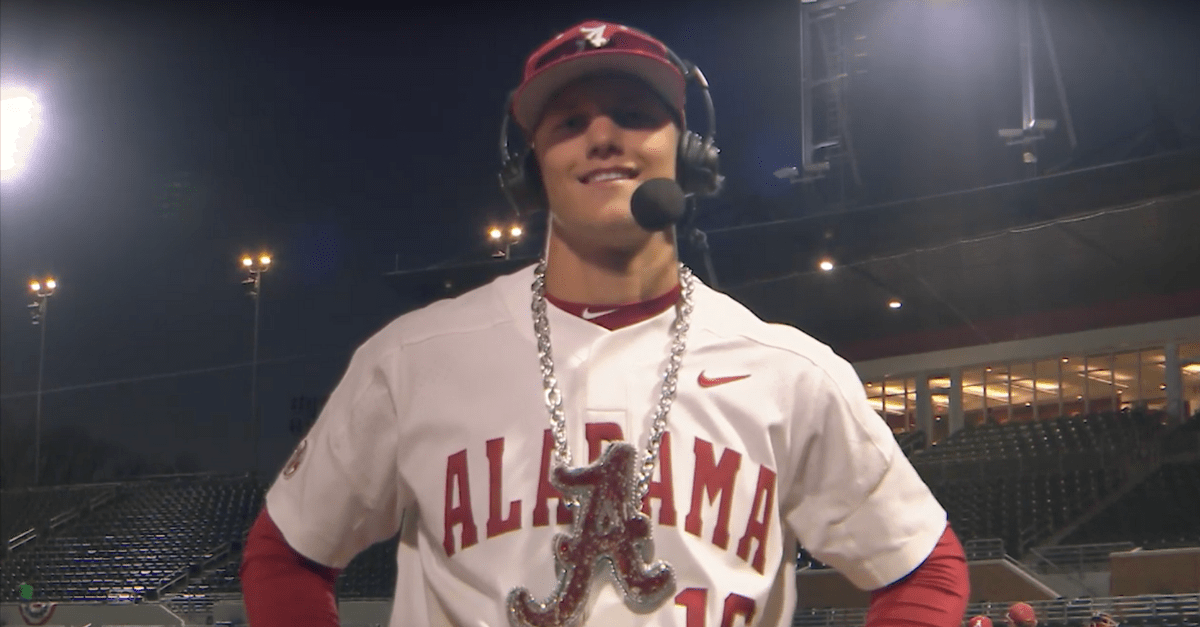 Owen Diodati has the type of sweet, left-handed swing you see in movies. Like that of the final light-shattering blast in The Natural, the Alabama Crimson Tide freshman outfielder’s stroke can mesmerize fans and torture opposing pitchers. And it has.

Through eight games of the college baseball season, the kid from Canada has carried the Crimson Tide to a perfect 8-0 record and is pacing the Southeastern Conference in home runs and RBIs.

The SEC may be dominated by flamethrowers like Georgia’s Emerson Hancock and Florida’s Hunter Barco, but “Dio” is singlehandedly putting Alabama baseball back on the map and looking to take Alabama to the NCAA Tournament for the first time since 2014.

So, how does a sweet-swinging freshman with a wicked slap shot from Niagara Falls, Ontario, where the annual snowfall is 61 inches, wind up playing in Tuscaloosa, where fans proudly sing “Dixieland Delight” in the Heartland of America?

Owen Diodati: A Kid From Canada

Today I played my last game as a member of the Canadian Jr. National Team. I can’t thank @baseballcanada enough for the unforgettable opportunities & experiences I’ve been given the last 2 years. Representing my country has been a dream come true & I am so proud to be Canadian🇨🇦 pic.twitter.com/pA7US4byov

Owen Diodati turned down the opportunity of his dreams to put on the Alabama jersey.

His favorite MLB team, the Toronto Blue Jays, selected him in the 29th round of the 2019 MLB Draft. Diodati and his family told the Blue Jays how much money he would sign for, and the team came up just short.

He told the St. Catharines Standard that offer was “late second-round/early third-round money.” That means Diodati likely turned down between $600,000 and $1 million to play baseball in the SEC for Alabama.

“You’re playing baseball in the SEC, which is the best baseball conference in the world,” he told the newspaper.

His father, Ryan, played Division I baseball at Niagara University. His grandfather, Doug Rombough, scored 24 goals as a center in the NHL for the Buffalo Sabres, New York Islanders and Minnesota North Stars in the 1970s. Even his uncle, Jim Diodati, is the current mayor of Niagara Falls.

Diodati played baseball and hockey growing up, too. He was 15 when he was drafted by the North Bay Battalion of the Ontario Hockey League. He attended the team’s rookie camp and earned an invitation to the main camp, but he knew it wasn’t for him.

“It was cool and everything, but I knew in my heart it wasn’t for me,” Diodati told The Standard. “I took the leap and went on the baseball side.

“It was always the sport I loved more since I started basically.”

As a senior at A.N. Myer High School in Niagara Falls, Diodati was rated the No. 2 catcher in Ontario by Perfect Game and a top-400 draft prospect by Baseball America.

Diodati also represented his country as a member of the Canadian Junior National Team, which is how Alabama discovered him. He and the team were in Florida when the Crimson Tide offered him in the spring of 2018.

Diodati had never even been to Alabama before setting foot on campus. He expected a bit of a culture shock, but he couldn’t have been more wrong. It’s made him realize becoming a member of the Crimson Tide was the best decision he could’ve made.

“The people here are so inviting and friendly. It makes home not feel so far away,” Diodati wrote for Alabama Athletics. “While it was a decision that took a lot of time and consideration, I believe 100% I made the correct move.”

The most head-scratching name left off was @owendiodati, I sent him the article and his response was simple “Just wait and See”

Through just eight games, the 6-foot-2, 220-pound freshman has made quite the first impression on his teammates and Alabama head coach Brad Bohannon in right field at Sewell-Thomas Stadium.

Diodadi is hitting .385 with four home runs and 12 RBIs. Those numbers rank third, tied for first and first in the SEC, respectively. As a hitter he makes solid contact, lines doubles and launches moonshots.

After his first weekend of NCAA baseball action against Northeastern, Diodati had already hit three home runs, a double, a triple and eight RBIs. In nine at-bats, he collected six hits.

?Owen?s a guy that a year ago I could?ve told you I had really, really high expectations for him,? Bohannon told the Montgomery Adviser after a 3-for-3 day in Alabama’s 6-3 win over Northeastern.

Of course, he earned SEC Co-Freshman of the Week honors for that weekend.

The future is bright for Crimson Tide’s baseball team. Diodati is becoming a household name in the college baseball world. Fellow freshman pitcher Connor Prielipp looks like a legit ace.

As long as Alabama can weather a touch SEC slate that includes teams like Mississippi State, Ole Miss, Auburn, Texas A&M, Vanderbilt and LSU, there’s no reason the Tide shouldn’t be playing postseason baseball at the end of the season.

But to do that, they’re gonna need Owen Diodati.