In 2021, Houston Cougars head coach Kelvin Sampson took his team to the NCAA Tournament's Final Four for the first time in nearly 20 years. His resurrection story and road back to college basketball's upper echelon has been filled with ups and downs.

Before taking over the Houston basketball program, back when the 65-year-old coach was leading the Oklahoma Sooners' program, he came under fire from the NCAA for recruiting violations. That led to him being barred from off-campus recruiting and making phone calls for a full year.

Trouble followed him in 2008 at Indiana, where the NCAA put the Hoosiers on three years' probation for more violations under his tenure. The NCAA also imposed a devastating five-year show-cause penalty, which essentially kept him out of college coaching until 2013.

Sampson took over as the University of Houston's head coach in 2014 and although he initially struggled to get out of the second round, he now has the Cougars thinking national championship, after failing to secure a win beyond the Sweet 16 in 2022. None of that might have been possible without his loving wife, Karen, by his side.

Join us as we wish HAPPY BIRTHDAY to the Queen of Houston Basketball... Karen Sampson!#ForTheCity #GoCoogs pic.twitter.com/bhrkooeOHQ

RELATED: Who is Scott Drew's Wife?

Houston men's basketball coach Kelvin Sampson has been married to Karen Sampson for the last 32 years.

Kelvin, who is from Pembroke, North Carolina, but born in neighboring Laurinburg, reportedly met the young Karen Lowery while they were classmates at Pembroke High School, initially meeting when the two were placed in the same history class. Six years later, they tied the knot and made things official.

Karen graduated from UNC Pembroke, where she was in the school's marching band and Kelvin played basketball. She then taught kindergarten in North Carolina and later moved to East Lansing, Michigan, to follow her husband, who began his career as an assistant coach at Michigan State under Jud Heathcote in 1979. She currently serves on the UNC Pembroke Board of Trustees.

Throughout Kelvin Sampson's coaching career and moves to Norman and Bloomington, Karen has been there by his side. "Karen is honest, meticulous, has great attention to detail, leaves no stone unturned. She's amazing that way, and she's just got a heart of gold. Probably the best person I've ever been around is Karen," he told The Oklahoman.

His path has included stops at Michigan State, Montana Tech, Washington State, the University of Oklahoma, Indiana University and in the NBA for the San Antonio Spurs, Milwaukee Bucks and Houston Rockets. He's guided the Houston Cougars to six straight 20-win seasons out of the American Athletic Conference. 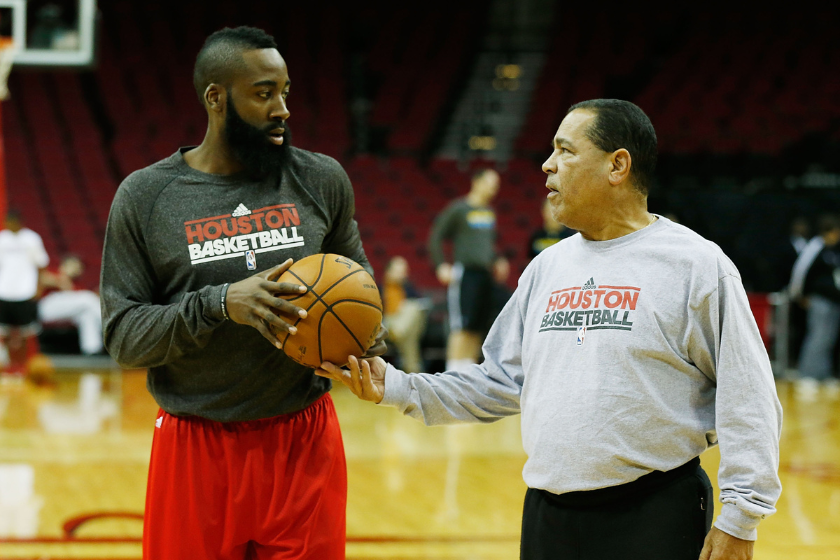 Sampson blossomed into a respected coach at Oklahoma, where he was named Associated Press Coach of the Year in 1995. He earned his first trip to the Final Four in 2002. Before Houston's 2021 NCAA Tournament run and Final Four berth against Baylor in Indianapolis, he signed a contract extension to stay with the school through 2027.

Karen has always been interested in her husband's teams. She even requested a team autographed ball from his first Houston team, which went 13-19, in 2015.

"That team hung in there," he told The Oklahoman.

"It's the only team that my wife, Karen, requested a basketball that every kid on the team sign it. That's how special that team was to us."

Kelvin and Karen Sampson have two children together. Their daughter, Lauren, serves as the director of external operations for the Houston Cougars. Their son, Kellen Sampson, is an assistant coach alongside his dad for the Cougars. They also have a granddaughter named Maisy Jade and a grandson named Kylen Ned.

Kellen played college basketball for his dad at Oklahoma from 2004-07 and has served previously as a graduate assistant under Kelvin's basketball teams before. While that may seem like unchecked nepotism, that's also how Kelvin got his start, in a way. Kelvin's father, John W. "Ned" Sampson, was the coach of his son's high school basketball team. Seems like coaching runs in the family.

Kelvin called the Houston job "the best job I've ever had" because he's gotten to see his son grow as a coach. He also said it was only a matter of time before Kellen became a head coach somewhere.

Kelvin Sampson is already a legend in Oklahoma. Now, he's establishing himself as a top-notch coach at Houston, where he's got his wife Karen and children right there next to him.

This article was originally published on March 31, 2021, and has been updated since.

MORE: Who is Mark Few's Wife?