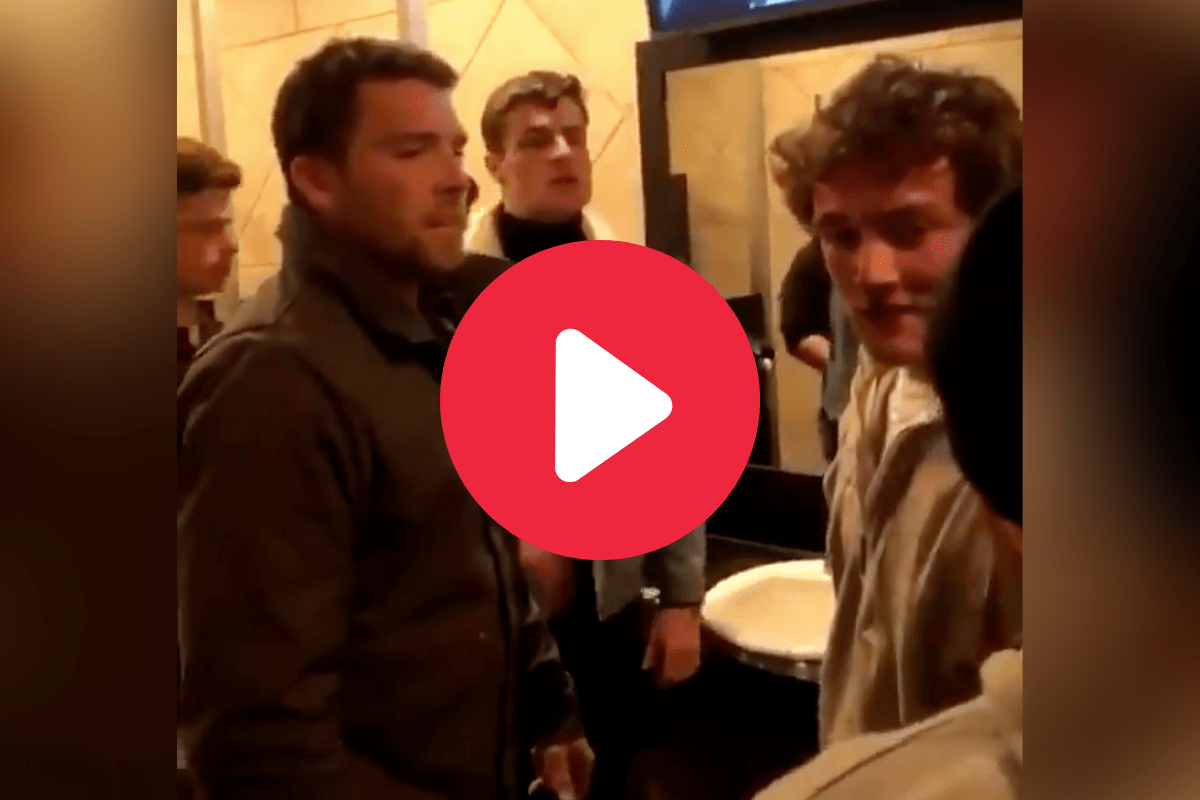 Never (ever) pick a fight with an MMA fighter. Unless you want your head beaten into the cement or your nose bloodied and battered from a vicious headbutt, I seriously advise anyone to walk away.

Oklahoma Sooners hold and wide receiver Spencer Jones must not have ever heard that bit of advice before engaging in a bathroom bar fight. Jones caught more than a pass or a snap last weekend. He caught a fury of hands and nearly lost his eyeball in the process.

OU football player Spencer Jones picked a fight against a guy with a decade of MMA training at an OU bar this past weekend.

It didn’t end well for him and he almost lost his eye. He is currently recovering from eye surgery. pic.twitter.com/OuvgyppljM

Jones is on the left in the video. He tells the shorter dude in front of him to “get the f*** out of here” before a man behind Jones shoves the guy. That’s when the man in front of Jones wiped blood from his face onto Jones and began swinging.

Jones was dropped to the bathroom floor as other men were busy at the urinals. Somewhat ironically, Oklahoma’s holder found himself in a chokehold and repeatedly being hit in the face during the brawl. Jones’ face was visibly bloody from the fight.

OU Daily reported the college football player nearly lost his left eye during the fight and needed surgery to rebuild his orbital socket.

?Dr. Brooks came out of that surgery saying he?s extraordinarily lucky at this point, that he?s lucky he didn?t lose the eye altogether,? Jones’ lawyer Woodrow Glass told OUDaily.com. ?And so he was able to do some things surgically to rebuild that orbital socket and thinks everything is eventually going to come back to normal, but it?s going to take a while for him to fully recover.?

According to OU Daily, the incident took place at Norman’s Logies on the Corner, a Campus Corner bar, last weekend between Saturday night and Sunday morning, or between February 13-14. The bar is just minutes away from the Sooners’ Gaylord Family Oklahoma Memorial Stadium.

Video of the incident began circulating on social media nearly a week later on Friday, February 19. An investigation is underway by Norman Police.

There’s nothing funny about almost losing an eye, but Twitter still found a way to have fun by meme-ing the fight:

Spencer Jones served as Oklahoma’s holder on all place kicks last season. The 6-foot-1 redshirt senior from Nashville, Tennessee, won the Mortell Holder of the Year Award an appeared in 11 games as an Academic All-Big 12 First Team honoree.

Back in April 2020, a video of Jones shooting a basketball and winning $1,000 from his dad gained traction on social media.

Jones didn’t appear to start the physical altercation, but the man beside him didn’t help their case. The OU football player is just lucky to have his eyesight after that nasty bar fight. Hopefully he took a shower afterward, too.

MORE: The Football Fight So Ugly, Every Player Received a Penalty