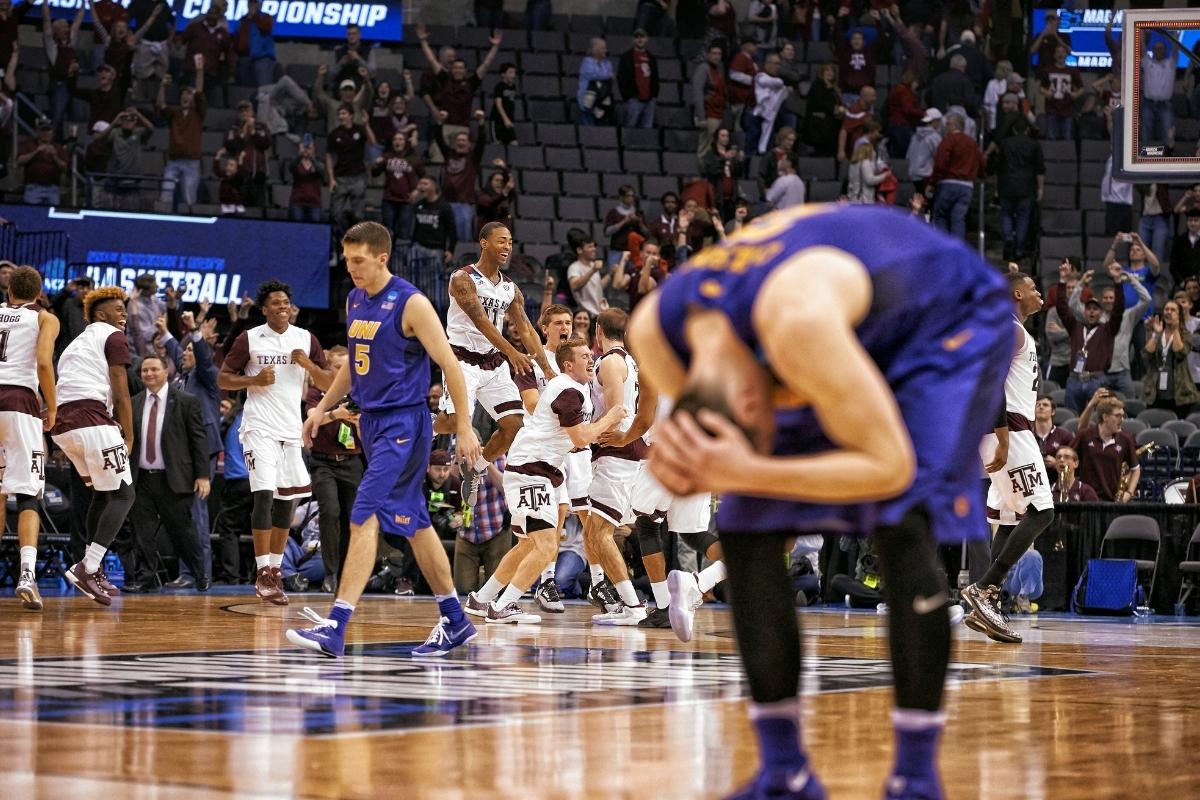 As noted sage philosopher Rasheed Wallace once proclaimed: ball don?t lie. Basketball?s guiding karmic balance has a way of sorting itself out. Never is that more true than in the NCAA Tournament. March Madness is a wild time of year where truly anything can happen, from brilliant buzzer-beaters to unexpected upsets to the sorts of Cinderella stories you just don?t see in any other sport. There?s a reason it?s probably the single most fun sporting event of the year; the unpredictability of the tourney is unlike anything else in sports. Often in these games, brilliant plays come from the most unexpected sources, previously unknown athletes displaying feats of unbelievable athleticism and daring. Truly, the Big Dance has seen some of the greatest plays in history at any level of basketball.

This post, though, isn?t about those plays. This? this is about the other kind. The really, truly atrocious kind, the kind that leaves you dumbfounded and asking what in the world the player, referee, or entire team in question was even thinking. It takes a lot to qualify for this list; you can?t make it on here simply by having a bad game and suffering an ill-timed blowout; even Virginia?s legendary self-immolation against UMBC in the first round in 2018 doesn?t qualify here. Whether these plays occurred in the first round, the Final Four, or anywhere in between, every one of them was an absolute travesty. So without further ado, here are ten of the worst plays in NCAA Tournament history.

From the moment you started reading this, you knew this one was coming. It?s interesting that the most legendary bad play in basketball history came from a future NBA Hall of Famer. Trailing by two with only seconds to play against the UNC Tar Heels in the 1993 tourney, Michigan?s Chris Webber was double-teamed, so he did the reasonable thing and called a timeout. The problem was his team was out of timeouts, which resulted in a turnover and two foul shots for North Carolina. It has to be regarded as the most inexplicable and unexpected bad play in tournament history.

If Chris Webber?s timeout was the least predictable bad play in men?s basketball history, this one was the most predictable. Going into the 2008 national title game against Kansas, everyone and their mom knew the Tigers? Achilles heel was an inability to hit free throws. Nevertheless, coach John Calipari (this was his last stop before going to Kentucky) insisted his guys would hit those shots when it mattered. Turns out, that, uh…did not happen. With two minutes left, Memphis was up nine ? and then they went 1-for-5 from the line down the stretch to give away a chance at cutting down the nets.

There has probably never been a worse traveling call than this one at any level of basketball. Trailing Georgetown by three with less than two minutes left in the 1989 Sweet 16, NC State?s Chris Corchiani drew a foul and drilled a shot in the lane for a potential three-point play to tie the game ? only referee Rick Hartzell called him for a walk. This call was so bad even Hartzell later admitted he?d botched it.

This is probably the worst flop in basketball history that didn?t involve Manu Ginobili. In a 2014 Sweet 16 matchup against Michigan, Tennessee put on a show, rallying from down 15 in the second half to pull to within one with six seconds left. Volunteers? forward Jarnell Stokes was called for an offensive foul when the Wolverines? Jordan Morgan threw himself backward hysterically. It?s frankly amazing anyone could watch that play and not see it for what it was, let alone a referee whose entire job is to get these sorts of calls right.

This wasn?t so much a bad play as it was a truly horrifying one. A few times in sports history (in the NFL, NHL, NBA, wherever), a player suffers an injury so horrific they won?t even show replays of it years later. These injuries are so bad you don?t even need to say what happened, just the names involved: Joe Theismann, Alex Smith, Shaun Livingston, Clint Malarchuk, Shaun Livingston, Willis McGahee. Louisville?s Kevin Ware suffered one that was as bad as any of them: in the 2013 Elite Eight, Ware went for a block and landed so horribly he suffered an open fracture of his tibia. It was so bad players on both teams became physically ill. This one still gives me nightmares.

NC State?s 1983 national championship run is legendary for a reason; it was completely unexpected after a lackluster regular season, and then the tourney itself was a light show, filled with dramatic moment after dramatic moment. They saved the best for last, as the title game featured one of the wildest finishes in college basketball history, when Wolfpack center Lorenzo Charles scored an unplanned buzzer-beating alley-oop. As fantastic as Charles? play was, though, a lot of people missed what ultimately allowed it to happen: Houston?s team of future NBA Hall of Famers just…didn?t box out. It remains possibly the most underrated oopsie in March Madness history.

Yes, this wasn?t one play, but since at least a half-dozen moments from one disastrous 35-second sequence could?ve made this list, I?m gonna say this counts. Basketball tournaments are the only time you can get something like this wild, wild sequence. With less than 45 seconds left, Northern Iowa held a 12-point lead over Texas A&M ? then it all went wrong. First, they gave up an easy putback. Then they turned the ball over on a bad pass and gave up an easy layup. Then they turned the ball over again and gave up an easy dunk. Then they gave up a three. UNI finally scored, only to give up an easy layup and a three-point play. Then a corner trap led to yet another turnover which resulted in an easy Aggies layup, finally tying the game. Two overtimes later, UNI gave up the game. No less than LeBron James commented as to this one, saying that if he had been on Northern Iowa, this would?ve made him quit the game of basketball altogether.

Welcome to the stupidest two seconds in NCAA history. Butler made the national title game in 2011, but they almost got knocked out in the second round. Facing #1 seed Pittsburgh as a #8 seed in the second round up 70-69, Butler committed a terrible sideline foul with two seconds remaining. Pitt small forward Gilbert Brown hit his first free throw to tie the game, but then missed the second ? and then Pitt made an equally stupid found on the rebound which allowed Butler player Matt Howard to win the game on his own free throws.

If there?s one thing you absolutely are not ever supposed to do, it?s foul a shooter while they?re hoisting up a three. At worst, you give them three free throws, and at best, you?ve just handed them a four-point play. But that?s exactly what Indiana?s Dane Fife did in the Hoosiers? 2002 national semifinals game against Duke. Indiana had a 4-point lead when Fife gave Jay Williams a chance to tie the game in one play. The only reason it?s not considered one of the most tragic plays ever is it didn?t actually hurt them: Williams missed the free throw and Indiana hung on to make the national championship game.

This has to be considered the worst call in March Madness history. The Northwestern Wildcats had never made the NCAA Tournament until 2017. Their first time in the Big Dance started well as they managed to win their first-round game, then came up against perennial powerhouse Gonzaga in the Round of 32. Despite trailing by 22, Northwestern reduced the lead to five and was about to drop it to three, a potential Cinderella run in the making. That?s when Gonzaga?s Zach Collins got away with a truly egregious goaltending call, poking his hand literally up THROUGH the basket. Not only did the refs miss it, when Northwestern coach Chris Collins justifiably reacted to the play, he was called for a technical and the Wildcats? run was stopped in its tracks.