If you looked around the country the last four years, you wouldn't find many high school wide receivers as talented as Edna Karr's Destyn Hill. the four-star wideout has good size, toughness, and the speed to give defensive backs nightmares. There are countless reasons why several of the top college football programs wanted to add him to their 2021 recruiting class.

Hill, a New Orleans, Louisiana native, is a four-star recruit with a lot of talent and even more upside. He's that electric, and his recruitment ended in Tallahassee, Florida much to the dismay of other programs.

Or at least, that's what we all thought. Instead, Hill has still not arrived at Florida State after failing to enroll in FSU's summer semester.

FSU put out a statement, saying bluntly, "Destyn Hill's enrollment is delayed due to a personal matter. With respect to his family's privacy, we are looking forward to him joining our program in the future." This came weeks after NoleGameday reported that FSU's coaching staff "still believes Destyn Hill, the top signee of the 2021 class, will arrive in the summer."

FSU fans flooded Hill's social media accounts asking "where you at?" and other such questions, but still no one outside of the Noles' lockerrom seems to have any idea what's going on with Hill's future at the school. But as the calendar turns to August and Destyn Hill remains away from Doak Stadium and Florida State, his college career potetial turns from hype to hope.

As an elite national prospect ranked No. 113 by the 247Sports Composite, it's no surprise wide receiver Destyn Hill racked up some impressive offers.

The 6-foot wide receiver narrowed his list down to the Alabama Crimson Tide, Florida Gators, Florida State Seminoles, LSU Tigers, and the Oklahoma Sooners in March 2020. 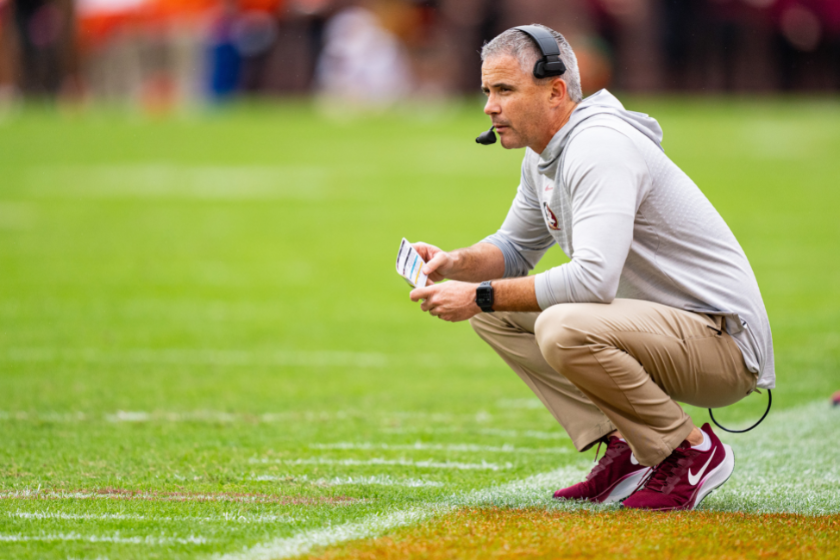 After nearly a year and this little event called the coronavirus pandemic, Hill, who formerly went by Destyn Pazon, committed and signed with the Florida State Seminoles on National Signing Day in early February. He's ACC-bound.

"Without further ado, for the next three or four years, I'll be attending Florida State University," Hill said in a ceremony at Edna Karr High School, per 247Sports.

Hill clearly thinks high enough of himself to say he could only play in Tallahassee for three years. That's for good reason, because the four-star wideout signee and No. 5 recruit in Louisiana chose head coach Mike Norvell's 'Noles over the LSU Tigers, Florida Gators, Alabama Crimson Tide and Oklahoma Sooners.

With Hill's signing and the addition of Auburn running back transfer D.J. Williams, the Seminoles have some star power headed their way. However, that's when Hill's enrollment was delayed for what Noles247 reported as "undisclosed reasons".

Those same undisclosed reasons now appear to be keeping Hill out of Tallahassee for another year.

If a recruit doesn't show up to campus, that's normally not a big hit for an athletic program. But Destyn Hill is not just any recruits, which makes his absence sting even worse.

If you throw the ball up, there's a good chance Destyn Pazon is going to get it. That's what makes him special, and it's a big reason why Edna Karr won the Louisiana 4A state title his first three years of high school. The chance for a five-peat (Edna Karr started its streak when Hill was in eighth grade) ended when the Cougars fell to Carencro in 2020.

Of course, there's plenty for Pazon, who now goes by Hill, to get better at. He has the physical skills to be a potential difference-maker at the collegiate level. The four-star recruiting prospect could ultimately become an NFL Draft pick, too.

Recruiting services' scouting reports have taken note of his game. He's definitely one of the best prospects in the state and will be fun to watch next season and during the course of his college career.