Was Alabama-LSU the Worst National Championship Game of This Decade? 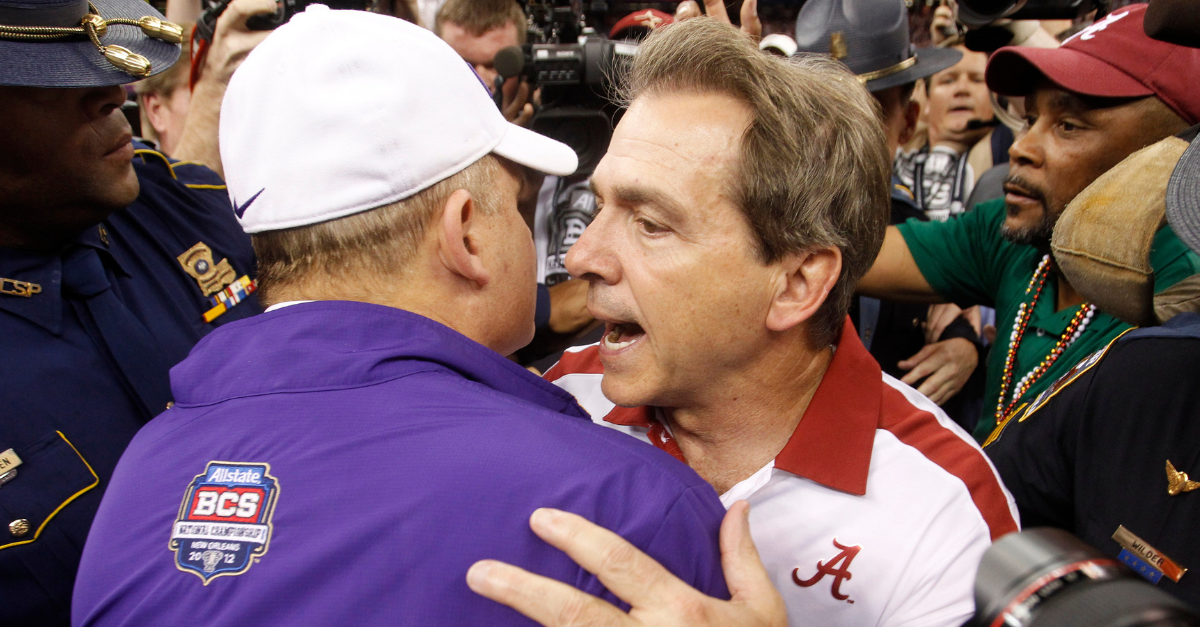 When you think of the great NCAA football championship games over the last decade, a few stick out. Alabama football’s 26-23 overtime win on a walk-off Tua Tagovailoa touchdown pass against Georgia in the 2018 national title game will go down in history. Cam Newton‘s Auburn Tigers won the 2011 BCS National Championship Game on a last-second field goal.

Even Jameis Winston‘s last-minute touchdown to Kelvin Benjamin sealed Florida State’s 2014 title and Deshaun Watson‘s record-setting performance in Alabama’s 45-40 win over Clemson in 2016 deserve to be in that conversation.

Then there are the stinkers.

Let’s start with the fact that it marked the first time in the 14-year history of the BCS that the two teams competing for a title came from the same conference. Alabama and LSU just happened to be in the same division as well. Non-SEC fans had zero rooting interest in the game.

That showed in the TV ratings. Its 13.8 overnight rating on ESPN was the lowest in BCS National Championship Game history. That’s because, despite the star power featured on the field, the game was an absolute snooze fest.

Coach Nick Saban’s 11-1 Alabama Crimson Tide entered as the top defensive team in the country. The 13-0 LSU Tigers ranked second defensively in the nation and boasted the Southeastern Conference‘s top scoring offense under head coach Les Miles. LSU was essentially playing at home in the Mercedes-Benz Superdome in New Orleans, just down the road from Baton Rouge in Louisiana.

RELATED: Watch What Happens When an Alabama Groom Marries His LSU Bride

As expected, when the two top defenses meet, the game was a low-scoring affair. It was the football equivalent of a pitching duel in baseball or softball, which doesn’t make for excitement on the gridiron.

Alabama totaled 384 yards of offense. Richardson — who finished third in Heisman Trophy award voting that year — managed the only touchdown, a 34-yard score with four and a half minutes remaining in the fourth quarter.

LSU fans were forced to watch ‘Bama kicker Jeremy Shelley nail field goal after field goal. He hit one in the first quarter, two in the second quarter and two more in the third quarter.

The Tigers offense under quarterback Jordan Jefferson secured just one first down and didn’t cross midfield in the first half. The second half wasn’t much better, as they tallied four first downs and crossed the 50-yard line once.

Wing, LSU’s punter, showcased his leg for NFL teams that night. He punted nine times for a total of 411 yards. He was the most impressive LSU offensive player considering Beckham was held to just 38 yards on five receptions.

Congrats to LSU's Odell Beckham Jr, who played in the 2012 BCS Championship on going #12 to the Giants @SugarBowlNola pic.twitter.com/G5DUs94FzC

It marked the first shutout in a national championship game since Miami blanked Nebraska in the 1992 Orange Bowl. LSU hadn’t lost in New Orleans since the 1987 Sugar Bowl.

Boring doesn’t even begin to describe what took place that day on January 9, 2012. But college football fans might’ve guessed that was coming judging from Alabama and LSU’s earlier matchup that season on November 5, 2011.

LSU marched into Tuscaloosa and beat the Tide, 9-6. The two teams each hit two field goals the whole game until Tigers kicker Drew Alleman drilled a 25-yard field goal in overtime. Neither mustered more than 300 yards of offense.

Alabama and LSU’s title game was more than just an uninteresting rematch. It was part of the reason the BCS system was finally eliminated in favor of the College Football Playoff in 2014.

Jim Delaney, the Big 10 Commissioner who was involved in the switch at the time, told SB Nation that game was essentially the final straw for the BCS.

?LSU-Bama was more of the cherry on the cake than the cause. It?s sort of like the Berlin Wall coming down. It came down for a lot of reasons. The LSU-Bama game shouldn?t be under-mentioned, but I?m not sure it mattered if it had two teams from different conferences. The BCS was doomed. It had run its course.?

Alabama and LSU were probably the best teams in the FBS that year. LSU wound up pounding Georgia in Atlanta’s SEC Championship Game. Many people thought Alabama didn’t deserve to play in the title game after already losing to LSU that year despite annihilating SEC teams like the Florida Gators, Tennessee Volunteers, Mississippi State Bulldogs, Ole Miss Rebels and Auburn Tigers in the regular season.

Alabama (11-1) or Oklahoma State (11-1) – Who should LSU battle in the BCS National Championship game? » pic.twitter.com/u8Ymm3xM

Oklahoma State had a case — they won games against ranked opponents Texas, Texas A&M, Kansas State and Oklahoma — but its one bad loss to Iowa State was a major blemish on its resume.

We’ve seen an epic all-SEC title game since the CFP’s inception, and it’s pretty clear the NCAA made the right decision to expand the system to four teams.

Let’s just hope we never get another titles game remotely similar to Alabama-LSU.