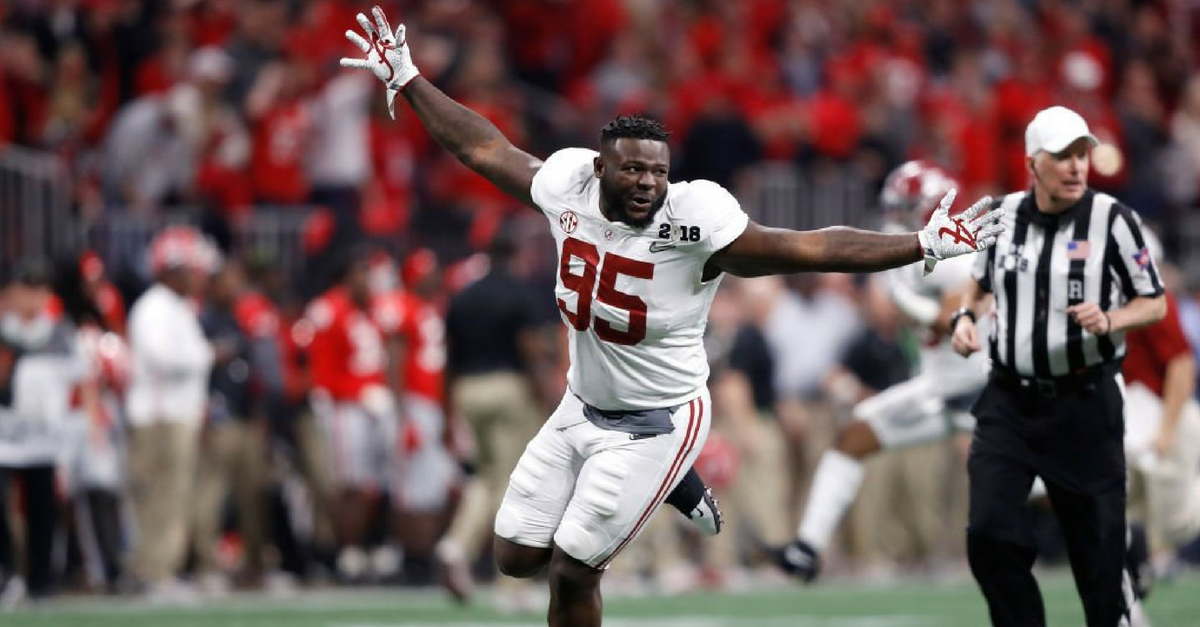 There are only a few sure things in life: death, taxes and Alabama football. For the third year in a row, the Crimson Tide start the season at No. 1 in the first Amway Coaches Poll of 2018.

Nick Saban’s dynasty at the University of Alabama netted him another pay raise and contract extension. The Crimson Tide waltz into their 2018 College Football Playoff title defense as the favorites to win it all again, and they grabbed 61 of 65 first-place votes in the first coaches poll.

The Crimson Tide have the best roster in college football year after year, and they have two quarterbacks in Jalen Hurts and Tua Tagovailoa that could start for any team in the country.

Things could be a lot worse.

The Washington Huskies cracked the Top 10, Florida State is still a top team after losing Jimbo Fisher and the “defending national champions” UCF Knights hang on to No. 23 in the preseason poll.

Football is so close, so it’s time to debate who is too high, who is too low, and who got downright snubbed in the newest college football rankings.

It’s the Crimson Tide’s world, we’re all just living it.

Quarterback controversy could be in the mix, but Dabo Sweeney’s Tigers remain the cream of the crop in the ACC once again.

Urban Meyer’s troubles are only just beginning, but this is still a good football team in 2018. Time will tell how much the outside affects the Buckeyes.

They played Alabama to overtime last season, but the Bulldogs fall to No. 4 to start the season. Expect the SEC East to end with a Georgia title once again.

Losing the Heisman winner the NFL? Not a problem for the Sooners. Quarterback Kyler Murray is a preseason candidate for several national awards, and Lincoln Riley’s staff has a talented group ready to run the Big 12.

We are all a team.

The Huskies climb from No. 15 at the end of last season all the way to this spot. Quarterback Jake Browning is a darkhorse Heisman favorite, and a win against Auburn on opening weekend could set the tone for a CFP playoff berth.

Sophomore running back Jonathan Taylor might be the best  running back in college football on the nation’s best running team. The Badgers can win the Big Ten if Ohio State declines.

Mark Richt and the Turnover Chain return in 2018, and this year could be huge in South Florida. If Malik Rosier’s play improves, the U can grind their way to an ACC title.

No Saquon Barkley, no problem for James Franklin. Boasting what he calls the deepest offensive line in years, the Nittany Lions can capitalize on Trace McSorley’s senior season with their first playoff bid.

SEC buzz says Jarrett Stidham is the best quarterback in the conference. Gus Malzahn’s team lost to UCF to end the season, but knocking off Alabama last year was huge for morale. Watch out for this version of the Tigers.

FBS Independence means the Fighting Irish have one of the toughest schedule’s in college football starting with Michigan on opening weekend. Season nine under Brian Kelly might not be a championship one, but this team can still win a lot of games.

Mark Dantonio looks up at three other Big Ten teams in the first poll, but the Spartans return 19 starters from last season. They could be a dark horse to win the Big Ten and earn a playoff berth.

Bryce Love and the Cardinal should have one of the Pac-12’s best offenses. David Shaw’s defense needs to pick up the slack after giving up 405.1 yards per game in 2017.

Jim Harbaugh is the loudest Big Ten coach, but the Wolverines have been awful quiet during his tenure there. Ole Miss transfer Shea Patterson gives Harbaugh a legitimate option a quarterback for a season that needs to deliver results to the Michigan fan base.

An 11-3 season last year gives the Trojans a spot in the Top 25, but losing Sam Darnold leaves questions galore for the USC offense and head coach Clay Helton.

Gary Patterson and the Horned Frogs slide from No. 9 at the end of 2017 to No. 16, but should be a formidable Big 12 opponent once again. Defense is the name of the game for a team that only allowed 19.0 points per game last year.

Here come the Hokies! Virginia Tech climbed from the bottom of the poll on the arm and legs of quarterback Josh Jackson. They’ll be good again, bringing back the fourth-best scoring defense in the country a season ago.

New head coach Joe Moorhead gets quarterback Nick Fitzgerald and a host of weapons in year one for the Bulldogs. They won’t win the SEC, but they’ll be one of the league’s best offenses in 2018.

Willie Taggert steps into the jumbo shoes left behind by Jimbo Fisher heading to Texas A&M. The Seminoles still recruit with best of them in the state of Florida, but are they still a top-tier threat in the ACC?

Senior quarterback Will Grier, if healthy, could lead the nation in every single passing category for the Mountaineers this season. WVU and Dana Holgorsen only managed seven wins last year. Expect that number to grow in 2018.

The Longhorns had their first winning season since 2013 under Tom Herman last year. UT locked in the third best recruiting class in the country this offseason, signaling significant change to come.

The masters of the Power Five return another loaded roster ready to crash the College Football Playoff party. Senior quarterback Brett Rypien was one of the most accurate quarterbacks in the country last year, and the Broncos offense will go as he does.

The defending national champs lost head coach Scott Frost to Nebraska, so McKenzie Milton and the Knights offense will have to prove if last year’s undefeated season was a fluke, or if they really are good enough to actually play for the national title.

Ed Orgeron has his hands full trying to bring the Tigers back into SEC contention in 2018. He still needs a starting quarterback, but luckily for him, LSU gets to play Alabama at home this season.

Ten wins in 2017 looks good for the Cowboys program, but losing Mason Rudolph and James Washington doesn’t help their case. Running back Justice Hill is the cog that will deliver the Cowboys a shot at the Big 12 title.

READ MORE: Paul Finebaum Squashes Claim That the Big Ten is Better Than the SEC