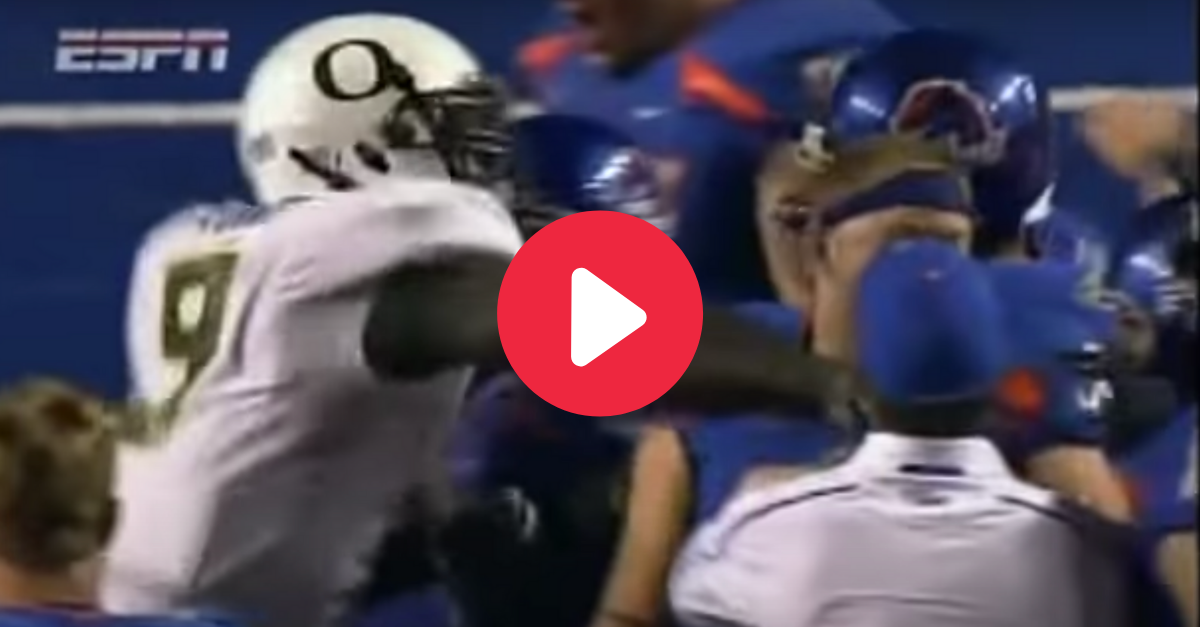 No matter the game, losing is never fun. It?s especially terrible when it?s a high-profile college football game. It?s even worse when a team was looking for revenge. The agony of defeat is brutal at times and it can be hard to keep those emotions in check. Just ask running back LeGarrette Blount.

Before the Oregon Ducks and Boise State Broncos met to open the 2009 season, tensions were high. The Broncos had won the year before in Eugene, and the Ducks wanted payback. Blount, who had just set a school-record for rushing touchdowns, even said Oregon owed Boise State ?an ass whupping? prior to the Thursday night game in Idaho.

This time on their famous blue turf, Boise State won again, 19-8, but the game was completely overshadowed by what happened after the game was over.

Oregon running back LeGarrette Blount had a tough day at the office. He was held to negative-five yards on eight carries, and understandably in a bad mood. So when Boise State defensive end Byron Hout came up to Blount after the game ? slapping his shoulder pad and talking trash ? all hell broke loose.

Although Boise State coach Chris Petersen tried to pull his player away, it wasn?t quick enough. Blount landed a sucker punch to Hout?s jaw and dropped him to his knees.

It got even worse from there. After Blount?s punch, the Ducks did all they could to get their star running back to the locker room without any further incident. Instead, Blount went after some taunting fans before Oregon assistant coach Scott Frost and police officers restrained him.

As a result, head coach Chip Kelly and former football coach turned University of Oregon athletic director Mike Bellotti decided to suspend Blount, a senior, for the remainder of the season. The Pac-10 Conference and NCAA supported the decision and emphasized sportsmanship, via ESPN.

Blount?s suspension was harsh, but it wasn?t the first of his career. The young man was also suspended during the offseason and reinstated before spring practice. This was just another problem and something Oregon president Richard Lariviere called ?reprehensible.?

Blount was able to return to action in mid-November and played in four games for the Ducks, including the 2010 Rose Bowl, to round out his career. He went undrafted the following spring, but he made quite the name for himself in the NFL, including scoring nearly 60 touchdowns and winning three Super Bowl rings with the New England Patriots and Philadelphia Eagles.

However, his punch on a Boise State player is something some fans will never forget or get over.