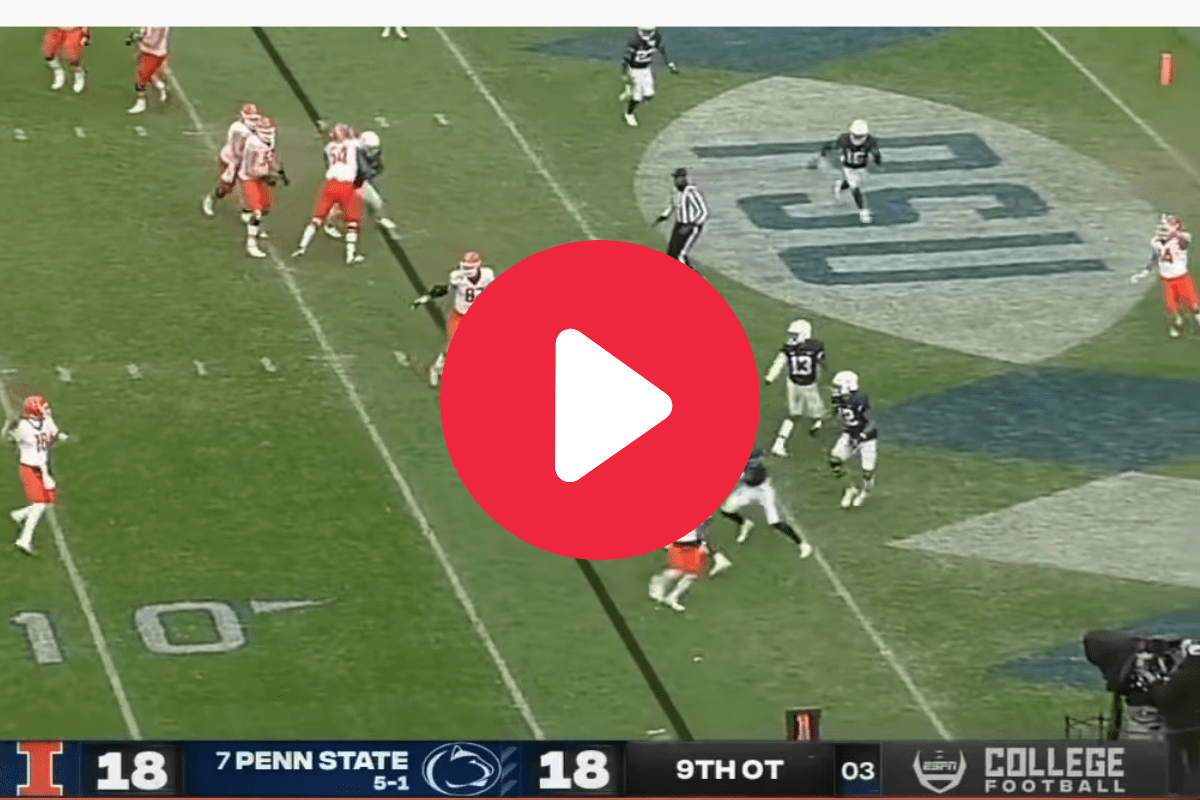 I thought the seven-overtime, 146-point thriller between LSU and Texas A&M in 2018 was the peak of free football.

It seemed like the game would never end until Texas A&M quarterback Kellen Mond found Kendrick Rogers to lift the Aggies over the Tigers in the seventh overtime. You could’ve watched about one and an eighth of the “Lord of The Rings” franchise in the same amount of time.

The peak has been surpassed not even three full years later. Everyone knows that when Illinois and Penn State take the field it’s going to be a classic. Boy, did the Fighting Illini and Nittany Lions deliver.

The Big Ten matchup took nine, yes NINE, overtimes to declare a winner. How Illinois and Penn State got there looked different than Texas A&M and LSU’s previous feat due to new overtime rules implemented this year.

ILLINOIS UPSETS NO. 7 PENN STATE IN THE NINTH OVERTIME‼️

That’s the most overtimes in FBS history 😳 pic.twitter.com/uKlOg9Sd6j

The Nittany Lions had every reason to feel confident heading into the game. They were the No. 7 team in the country and fresh off a heartbreaking loss to No. 3 Iowa. Coming off a bye week, a matchup with Illinois at home was the perfect rebound.

Bret Bielema’s Fighting Illini wasn’t going to just roll over. The team has been up and down throughout the regular season — including losing to UTSA a week after beating Big Ten West divisional foe Nebraska — but Bielema knows how the conference works from his time at Wisconsin.

Penn State jumped out to a 10-0 lead before Illinois cut it to 10-7 before halftime. Illinois knocked in a field goal and held the Nittany Lions scoreless in the second half to send the game into overtime.

As Jon Rothstein once said Heath Ledger as the Joker circa 2008 once said: “And Here. We. Go.”

The overtime game started as any would, but once the second overtime started, it took on a different look thanks to the new rules.

What Are the NCAA’s New Overtime Rules?

The 2-point conversion shootout is still better than the NFL’s overtime rules. pic.twitter.com/kZaoyOlyKr

We saw firsthand how dumb the new OT rules are Saturday, and there’s a very simple “fix” that I originally shared in April. I wrote about that and a lot more from the weekend in #TheMondayAfter. https://t.co/SPeBBSJUi6

The college football overtime rules most of us are familiar with were put into place in 1996. They’re pretty simple: Each time gets a possession from its opponent’s 25-yard line. There is no game clock, only a play clock. Teams must attempt two-point conversions after every touchdown starting with the third overtime.

In theory, this would condense the extra periods. As Illinois and Penn State showed us, it made for one wacky ending where no one could find the end zone.

After going scoreless in the first overtime, both teams converted field goals in the second overtime to tie the game at 16. We then went five overtimes where neither team converted a two-point conversion. Illini quarterback Brandon Peters found Isiah Williams to take an 18-16 lead in the eighth overtime. Penn State running back Noah Cain answered.

Illinois broke up a pass from PSU QB Sean Clifford in the ninth overtime to give itself a chance for the upset win. Peters rolled to his right and hit wide receiver Casey Washington in the end zone to seal the deal.

Illinois pulling off the upset win is notable by itself, but the thriller will be remembered as the longest game in college football history in terms of most overtime periods. It had to be the longest five hours of every Penn State fan’s life.