There was a time in Mike Gundy's tenure as the head coach of the Oklahoma State Cowboys football team when he was so disgusted with the media that he felt forced to take matters into his own hands. The mullet-sporting college football icon took the podium at his press conference, with nothing put a visor on his head, a newspaper in his hand and something on his chest that he needed to get off. Mike Gundy was about to give one of the greatest sports rants of all-time, he just didn't know it yet. This is Mike Gundy's "I'm a man, I'm 40!" moment.

There are a lot of quotable sports moments that have become memes over the years: "We talking about practice," from NBA legend Allen Iverson, or "What kind of mythical powers does a Sun Devil have?" from Mike Leach (which needs to become a t-shirt for me to wear around the office). Still, there's only a handful that can reach the Hall of Fame.

This rant by Mike Gundy is one of the greatest.

Mike Gundy Doesn't Get Mad, He Gets Really Mad 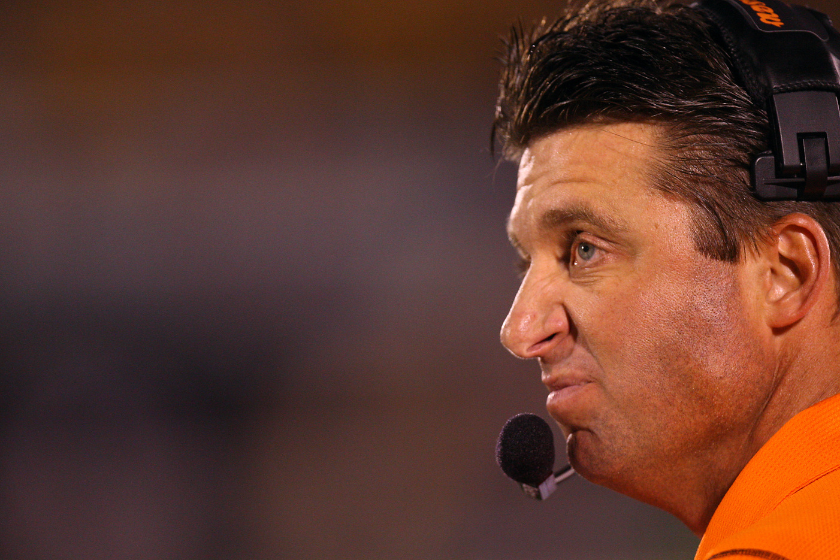 RELATED: The 9 Most Annoying Fan Bases in College Football, Ranked

For as long as Tom Brady has been in the NFL, Gundy's been coaching football at Oklahoma State as offensive coordinator and then head coach. But following a shootout win against Texas Tech, with a backup QB after Gundy benched starting quarterback Bobby Reid, Gundy wasn't a coach: he was a defiant protector.

Earlier that day, Jenni Carlson from The Oklahoman published an article criticizing Reid for his attitude. Carlson wrote that the QB seemed as though he needed to be "coddled," even pointing out that she saw Reid being fed chicken by his mother outside of the team charter.

After the article had been read by the entire Big 12 and Cowboys big victory in Stillwater over Texas Tech led by backup Zac Robinson, the OSU coach marched into his postgame presser with a full head of steam.

Welcome to one of the best moments in college football history. 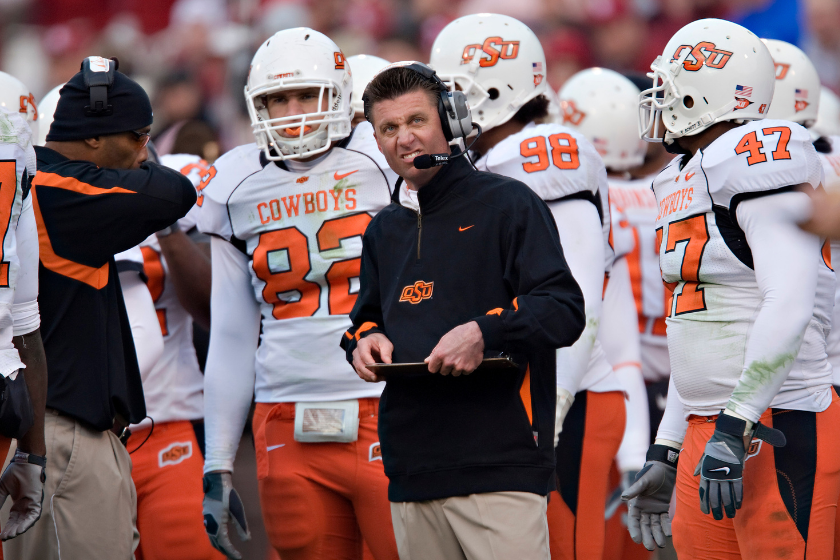 RELATED: The 25 Highest-Paid College Football Coaches Prove it Pays to Wear the Headset

"I want to talk about this article right here. If anybody hasn't read this article-- I don't read it-- this was brought to me by a mother, of children. I think it's worth reading. Let me tell you why I want to talk about this article. Three-fourths of this is inaccurate. It's fiction. And, this article embarrasses me to be involved with athletics, tremendously. And that article, had to have been written by a person that doesn't have a child. And has never had a child that's had their heart broken and come home... upset. And had to deal with the child when he is upset. And kick a person when he's down.

If you have a child someday, you'll understand how it feels. But you obviously don't have a child. I do.

Your child goes down the street, and somebody makes fun of him, because he dropped a pass in a pick-up game, or says he's fat, and he comes home crying to his mom, you'd understand. But you don't have that. But someday, you will. And when your child comes home, you'll understand.

If you want to go after an athlete-- one of my athletes-- you go after one that doesn't do the right things. You don't downgrade him because he does everything right and may not play as well on Saturday. And you let us make that decision.

That's why I don't read the newspaper: because it's garbage. And the editor that let it come out is garbage. Attacking an amateur athlete for doing everything right. And then you want to write articles about guys that don't do things right and downgrade them-- the ones who do make plays.

Are you kidding me? Where are we at in society today? Come after me! I'm a man! I'm 40! I'm not-- I'm not a kid. Write something about me, or our coaches. Don't write about a kid that does everything right that's heart's broken, and then said that the coaches said he was scared. That ain't true! And then to say that we made that decision because Donovan Woods, because he threatened to transfer. That's not true! So get your facts straight.

And I hope someday you have a child and somebody be-- downgrades him, and belittles him and you have to look him in the eye and say, "You know what? It's okay. They're supposed to be mature adults, but they're really not." Who's the kid here? Who's the kid here? Are you kidding me?

That's all I've got to say. Makes me want to puke."

Incredible. Oklahoma State football coach Mike Gundy, famously 40 years old at the time of this rant, was now the biggest personality from the school that gave us Barry Sanders.

The clip instantly went viral, with ESPN showing snippets almost around the clock for a week. The following Monday, Gundy apologized for his actions--but not in the way you'd think. Gundy didn't apology for the outburst, but more that his long rant distracted from the team's win. Boom.

Gundy's Cowboys wouldn't live up to their coach's fiery speech, however, failing to break into the AP Rankings the entire year. Oklahoma State finished the season 7-6, the same record as Alabama. The team who won the National Championship? The LSU Tigers, coached by Les Miles, the man Gundy succeeded. Can't win 'em all, I suppose. But you can become a meme in the process.

MORE: Mike Leach's 5 Greatest Interview Moments, From Weddings to the Mythic Powers of a Sun Devil