In college football, and even in the NFL, wide receivers and running backs get all the glory. To see a nimble-bodied athlete tip-toeing down the sideline used to be an insane feat. In Week 2, we saw Alabama's Jase McClellan scamper for an 81-yard touchdown and even Army got into the action with a 77-yard touchdown pass and they historically hate running the ball. That was just in the noon kickoff games.

Nowadays, swift-footed wideouts get all the glory when it comes to big plays that end in the endzone.

What we love to see is a big-bodied tight end steal a little bit of their thunder, which is exactly what Pitt Panthers tight end Gavin Bartholomew did against Tennessee in the first half of their Week 2 battle at Acrisure Stadium in Pittsburgh.

In the first quarter of the game, Pitt QB Kedon Slovis handed the ball off to running back Israel Abanikanda, starting in place of Rodney Hammond Jr., who took it 76 yards to the house, giving Pitt a 10-0 lead. After Hendon Hooker and the Tennesse Vols finally got on the scoreboard, Pitt head coach Pat Narduzzi knew it was time to draw up something special.

In their first possession of the second quarter, Slovis did his best Kenny Pickett impression and hit his tight end downfield with only one defender to beat, defensive back Trevon Flowers. Bartholomew sized up his defender and made the decision to take flight. The ACC tight-end hurdled the Vols defender, and instantly put himself on the Pitt long jump, triple jump and high jump teams. 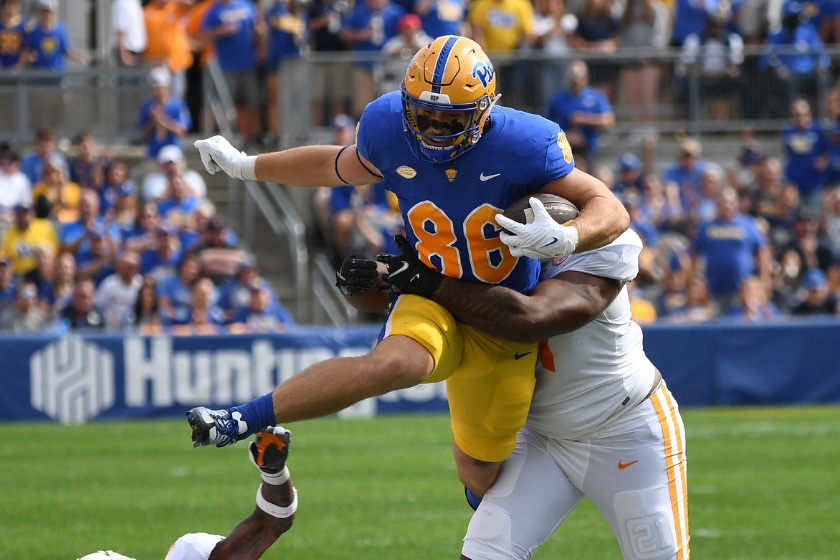 RELATED: Pitt Looks to Keep Momentum Going in 2022 With "Backyard Brawl" in Week 1

Pitt looks to keep their momentum rolling after defeating Wake Forest in the ACC Championship last year. However, the ACC is heating up as Mario Cristobal attempts to bring Miami back into relevancy, Devin Leary keeps leading NC State to solid wins and as Clemson looks to retain their college football powerhouse status they lost last season.

However, if Pitt keeps getting ESPN highlight plays like this from a certain Blue Mountain High School alum, it's possible we'll see the Pitt Panthers on top of the ACC once again.