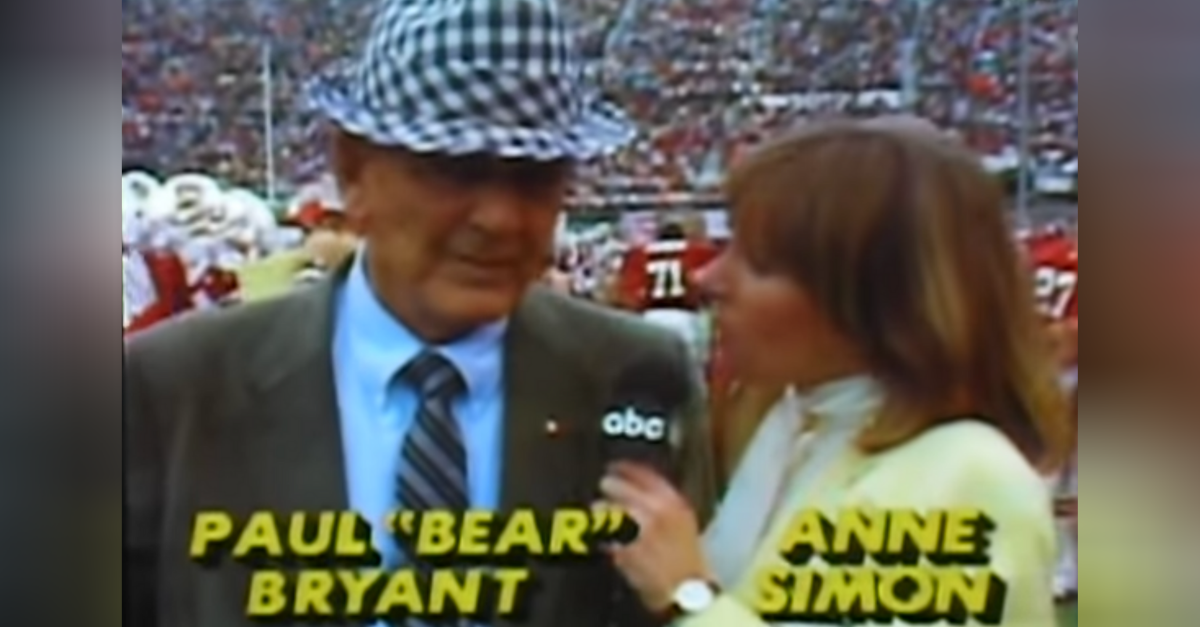 The man who gained his nickname from a $1 bet and wore a signature houndstooth hat gave his blood, sweat and tears to the University of Alabama, ultimately turning the program into a national championship-winning SEC powerhouse.

Paul Bryant became famous for the things he said in Tuscaloosa. He predicted his death in the weirdest coincidence ever. Plus, there are endless iconic quotes from Coach Bryant you can find on Google.

As one reporter found out during the 1982 Iron Bowl, Bryant had little time for dumb questions. It was clear he had one thing on his mind: Beating Auburn and winning the dang biggest football game of the season.

It turns out Bear Bryant and Nick Saban have more in common than winning national titles.

Alabama's legendary coach Bear Bryant was once asked what he would do when he was done coaching.

"I imagine I'd go straight to the graveyard," he said.

He died 28 days after he coached his last game (1982 Liberty Bowl). pic.twitter.com/NrJXtOaRpR

The 1982 Iron Bowl will forever be remembered for rookie Bo Jackson’s “Bo Over the Top” play that sealed the 23-22 for the Auburn Tigers. Crimson Tide fans surely don’t enjoy reminiscing on that day.

But lost in that game was a classic halftime interview between Alabama’s head football coach and ABC sideline reporter Anne Simon.

Auburn was leading at the end of the second quarter, 14-13. Bryant had made a change at quarterback from Walter Lewis to Ken Coley during the half despite Lewis’ 22-yard touchdown pass to wide receiver Joey Jones. His patience had grown thin after two costly turnovers.

On one specific passing situation play, Lewis — considered the better passer of the two — was standing on the sideline. This led to ABC announcers Keith Jackson and Frank Broyles questioning Bryant’s decision.

The 69-year-old Bryant, coaching in his final Iron Bowl, was having none of Simon’s questions when she grabbed the coach for a halftime interview.

RELATED: ?The Bear Bryant Show? Taught Football Like Never Before

Simon asked Bryant why he elected to go with Coley instead of Lewis under center.

Bryant then cut into Simon’s next question.

“I don’t have to apologize for who I play. I’m trying to win the game,” he said.

Bryant and Simon then continued on about the Tide’s turnovers before parting ways.

Can we really blame Bryant for snapping on the reporter questioning one of the greatest coaches in college football history? Either way, his decision didn’t work out. Lewis went back in the game in the second half. After Jackson went “over the top” to take the lead in the fourth quarter, Lewis failed to lead the ‘Tide to another score.

Reporter on Bryant: “He Really Bit My Head Off”

Simon told the New York Times she was caught completely off guard by Bryant’s responses. Maybe she should’ve realized this was the Iron Bowl, and tensions were sky-high between the Auburn and Alabama football teams.

”I was very surprised, because I was expecting this Southern gentleman, and he really bit my head off,” Simon said. ”I think I got out of it gracefully – I said he was obviously a man of few words, and that in this case perhaps his actions would speak louder than his words.

”But the amazing thing was the reaction afterward. Joe Namath came up to me and said, ‘Hey, way to handle the coach,’ and later we heard a call-in show on a local radio station, and people were discussing how he had treated me. People came up to me and talked about it for weeks afterward.”

The good news for Simon is that Bryant didn’t mean anything by his responses. Just a year prior at the 1981 Iron Bowl, he answered questions from Verne Lundquist very similarly. I think the last thing he wanted to do in the middle of a rivalry game was answer questions.

Bryant’s health had been declining and he died the following year in 1983 after coaching his 25th and final season for the Alabama Crimson Tide. The Bear’s legendary NCAA coaching career included stops at schools like Maryland, Kentucky and Texas A&M. He was buried in Birmingham and inducted in the College Football Hall of Fame in 1986.

Paul William “Bear” Bryant’s life was a treasure trove of classic Alabama tales, and this one falls right in that category. There’s a reason so many of his former players that went on to play in the NFL loved their alma mater.

As for Simon, she escaped the interview with some very important sideline experience.