Brian Robinson Stayed True to Alabama, And the Backfield is Finally His 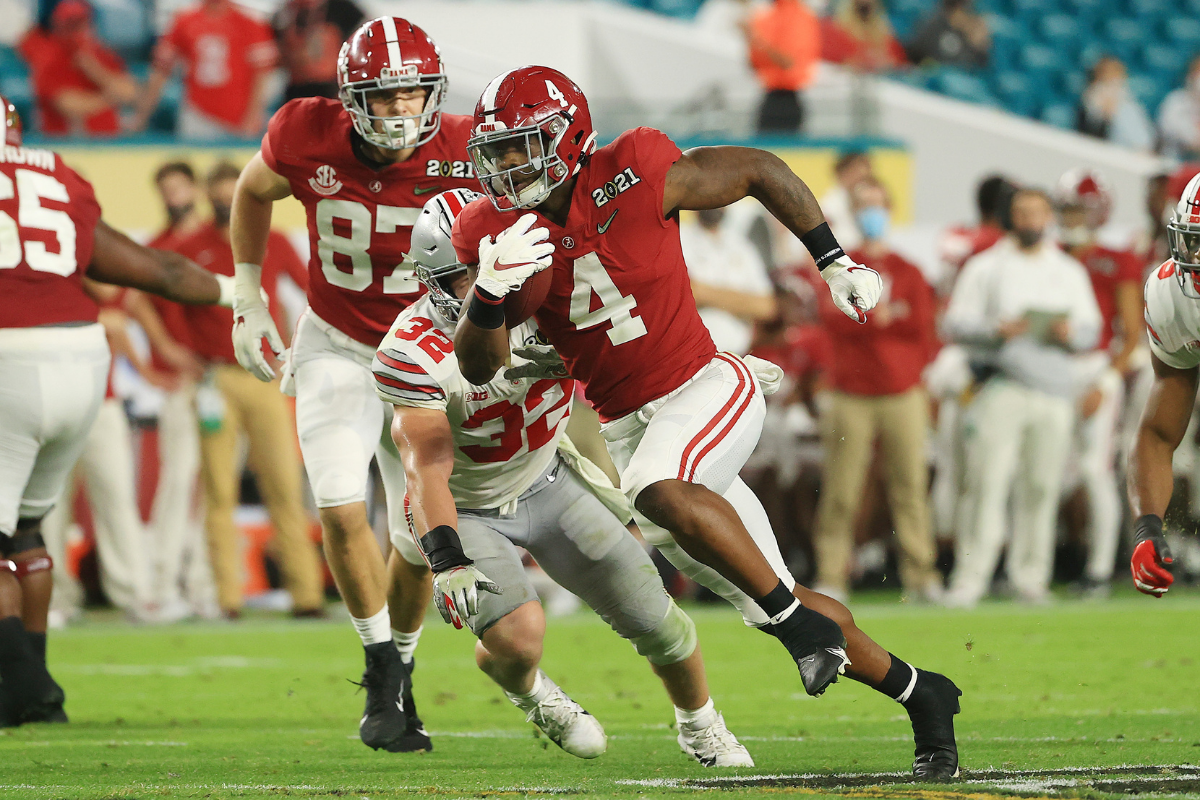 The coronavirus pandemic turned out to be a blessing in disguise for Brian Robinson Jr.

No, the Alabama running back wasn’t celebrating quarantines or the completely new way of life, but the wrinkle it threw into NCAA eligibility gave him a chance to suit up for his hometown team an extra season.

The likes of Crimson Tide greats and NFL studs have filled the running back room for the entirety of his college career. Bo Scarborough, Damien Harris, Josh Jacobs and Najee Harris have all shared the backfield with Robinson at some point.

Now, the coveted tailback spot is his to command.

RELATED: Bryce Young is Almost a Millionaire, And He Hasn’t Started a Game Yet

Robinson grew up living and breathing Alabama football as a kid in Tuscaloosa. He turned down offers from Auburn, Cincinnati, Georgia, Jacksonville State, Louisville, Ole Miss, South Alabama, South Carolina and Southern Miss to play for his hometown team.

A four-star recruit and stud at Hillcrest High School, Robinson learned how to train and prepare from 2015 Heisman Trophy winner Derrick Henry during his prep career. Add Henry as another member of the great list of Bama running backs Robinson has worked with.

Robinson saw his first real action as a junior in 2019, when he rushed for 441 yards and five touchdowns backing up Najee Harris. He was a change of pace to Harris again last year, totaling 91 carries for 483 yards and six touchdowns.

When Alabama released its depth chart for the 2021 season, Robinson was the No. 1 running back. Could he be the next Najee or Derrick? That’s up to him.

I don’t think it’s fair to call Robinson a late bloomer. He has all the skills to be a starting running back anywhere in the country, but he chose to play for the team he loved growing up.

That team happened to be the Alabama Crimson Tide, who happens to produce top-tier NFL Draft running back prospects on a yearly basis. Yet, Robinson welcomed it. He took in all he could from his former teammates.

“I really just learned just the work process,” Robinson told Sports Illustrated. “Just how we need to go about working every single day to get what we want. Being beside those guys, just seeing them work hard every day and create opportunities for themselves on NFL rosters as they are right now, I just use that as motivation for me.

“Sitting in the same room with those guys just watching how they work every single day and how they come to work. That’s the biggest thing for me is just the motivation from playing beside those guys.”

Robinson has the opportunity to catapult himself into that category this year. The key offensive components from last season’s national championship team are all in the pros.

Bryce Young is taking over at quarterback and Slade Bolden and John Metchie are set to replace DeVonta Smith and Jaylen Waddle out wide. Robinson, a redshirt senior, leads the backfield of Jase McClellan, Roydell Williams, Trey Sanders and Camar Wheaton.

If there’s anything Nick Saban likes it’s experience, and Robinson has plenty. LSU, Miami, Tennessee and Texas A&M will have to worry about the Tide from all different angles in the regular season while Ohio State, Clemson, Notre Dame (lol) and Oklahoma take note during the College Football Playoff.

Pay particular attention to the backfield this year, where Brian Robinson is champing at the bit to show what he can do as RB1.