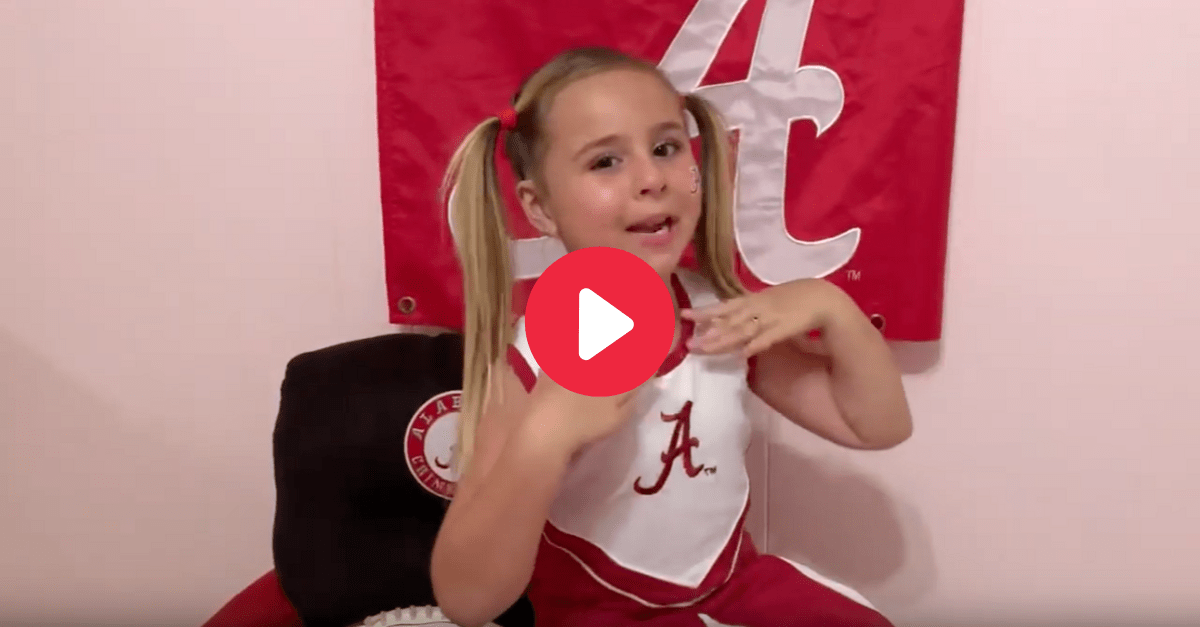 For as long as I’ve been following the Alabama Crimson Tide football team, I’ve learned that die-hard fans aren’t hard to find. There’s Irvin Carney, who hates Tennessee more than just about anything in life. Jason McMillan has a giant Nick Saban tattoo on his back. Who could forget Harvey Updyke, who went above and beyond to poison Auburn University’s famous oak trees?

Relentless Alabama football fans are everywhere, but none will ever top Halen Smith.

At just eight years old, Halen is already planning for the future. The Tennessee native wants to attend the University of Alabama and become an Alabama cheerleader. And she’s not just an adorable little girl who loves the crimson and white, she actually knows her stuff when it comes to Alabama football!

She’s a huge fan of head coach Nick Saban, and if anybody close with the university reads this, PLEASE get the six-time national championship winner to take 10 minutes and give Halen a phone call.

“I’ve been trying to get him to call me since I was in diapers,” Halen said in the greatest YouTube video of 2019. “C’mon man, geez!”

And Halen isn’t just a fan from far away, either. Her top recommendations for places to eat in Tuscaloosa are the Tropical Smoothie Cafe and iconic Rama Jama’s located directly across the street from Bryant-Denny Stadium.

Halen is a Southern girl at heart who’s appeared on ABC’s Child Support and USA Network’s The Secret Life of Kids. She has over 2,500 followers on Instagram and loves nothing more than flashing her Alabama Crimson Tide spirit every chance she gets.

If the current group of Alabama cheerleaders aren’t careful, this 8-year-old super fan is going to swoop in and take their spot before they can say, “ROLL TIDE!”

This article was originally published September 27, 2019.