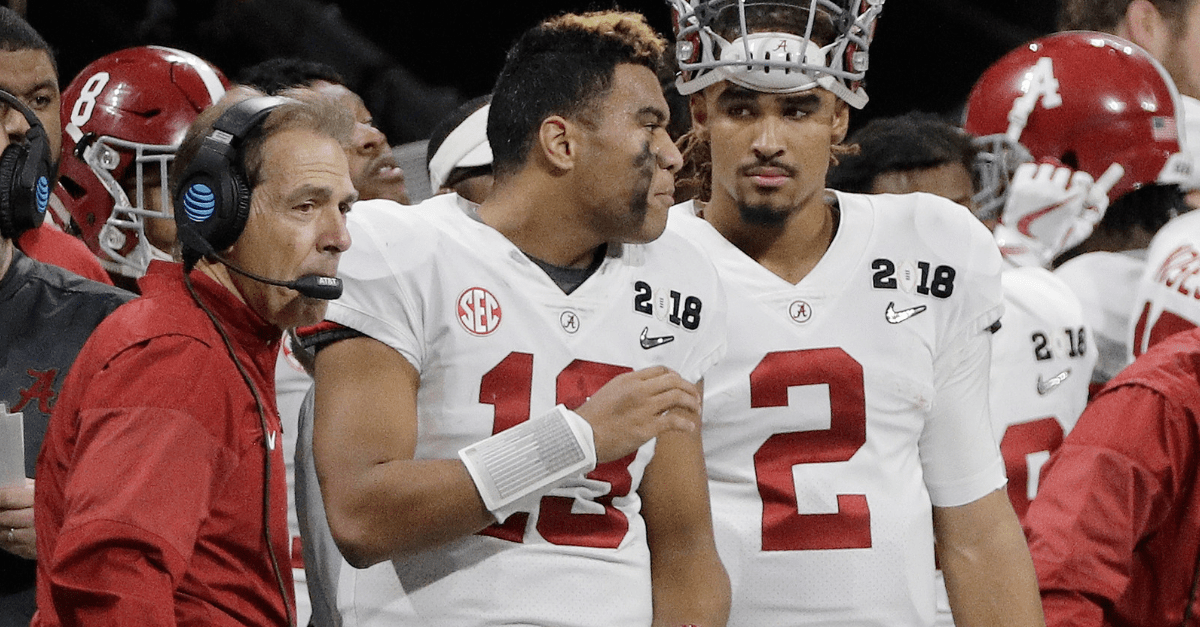 The No. 1 Alabama Crimson Tide rolled into Orlando, Florida and handled business against Bobby Petrino’s Louisville Cardinals on opening weekend. It wasn’t the cleanest game the Tide have ever played, but opening-weekend games replacing half of your starters usually never are.

The most important new starter was sophomore quarterback Tua Tagovailoa. All offseason, the quarterback controversy loomed over Tuscaloosa, but all those doubts were put to rest Saturday night. Head coach Nick Saban made one thing clear about his quarterbacks heading into this week: it’s time to stop asking about them.

Both Tagovailoa and junior Jalen Hurts could start on almost any FBS team in the country, but the problem is that both wear crimson and white jerseys and play for Nick Saban.

On Monday, Saban made the first public admission this year that one guy will now be the starting quarterback moving forward.

“I think everybody knows that Tua is going to start this game [against Arkansas State], and we’re going to use Jalen’s skillset in the future to help however we feel that he can benefit the team,” Saban said.

Tagovailoa finished the Tide’s 51-14 victory completing 12 of 16 passes for 227 yards and two touchdowns, while adding five carries, 26 rushing yards and a nine-yard touchdown run at the end of the first quarter.

Jalen Hurts was less effective, finishing 5-of-9 for 70 yards. Drives with Hurts as Alabama’s quarterback resulted in three points, three punts and a missed field goal.

Tagovailoa led Alabama on five scoring drives over his six possessions — the other was a fumble lost by wide receiver DeVonta Smith in Louisville territory.

Saban has been tested by the media to reveal some kind of negative quote directed at his quarterbacks, but the veteran head coach remained steadfast and made sure to let the world know that his team is his family, and he’d never sell them out for the sake of the press.

“I just want to be clear with everyone that I have done this in the past, where we don’t say who the starter is going to be for the first game, and we give both quarterbacks an opportunity to play in the game, which is exactly what we did in this game.

“So, now we know and you know. But just to be clear on something, I love all of our players on our team. I think as parents out there you relate to this that you love all your children. Sometimes, some of your children do things a little better than others. That doesn’t mean you vilify one and put the other on a pedestal, especially publicly because you want to support and help both to be successful. That’s exactly how I feel about our players.”

The 66-year-old Alabama legend is a class act, but he let his emotions get the best of him after Alabama’s game, letting loose unwarranted hate speech at ESPN sideline reporter Maria Taylor.

Was this a fair reaction by Nick Saban to Maria Taylor’s question about the QB situation? pic.twitter.com/H5BOfOmCNh

Saban addressed the comments saying he spoke with Maria privately and added, “I need to learn a better way to respond to that.”

Alabama’s next contest will be there home opener against Sun Belt powerhouse, the Arkansas State Red Wolves, on September 8.

READ MORE: Destiny Awaits Us All in This Alabama Crimson Tide Hype Video