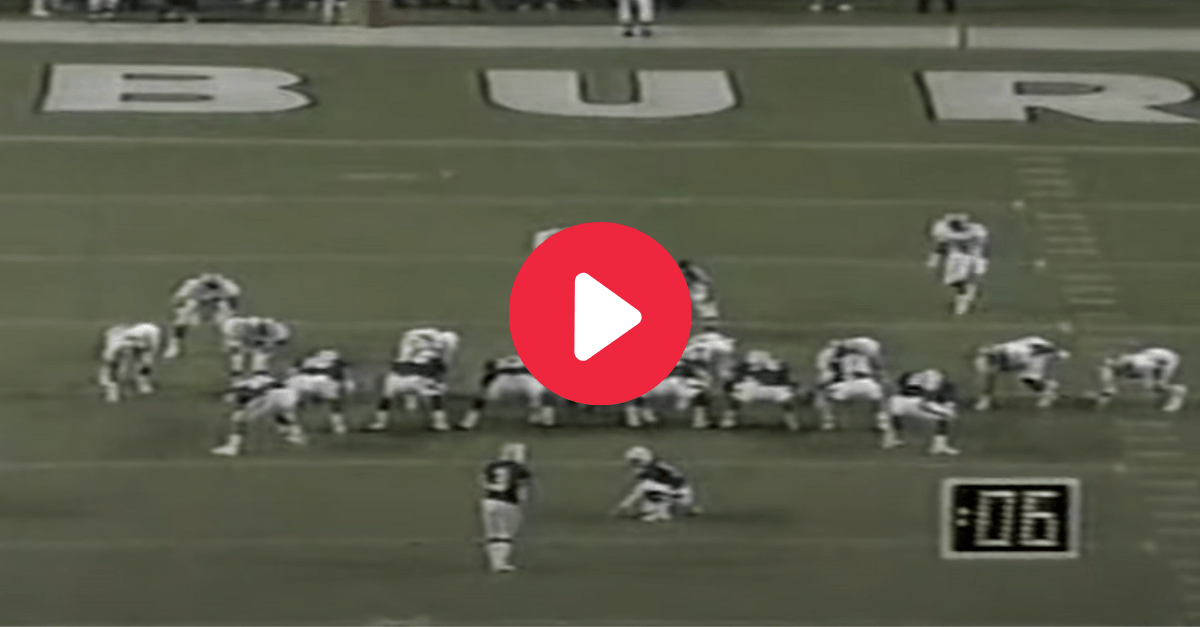 Back in the day, the Auburn Tigers and Florida State Seminoles used to be fierce college football rivals. Pat Dye and Bobby Bowden’s teams absolutely went at it. The two powerhouses haven’t played in the regular season for three decades, but there’s no doubt many still remember those matchups like they were yesterday.

Before Auburn and FSU met for the classic 2014 BCS National Championship Game, the last time they duked it out was on October 21, 1990. It was a game for the ages and one of the loudest ever at Jordan-Hare Stadium in Alabama.

The fourth quarter was simply wild. Both teams had all of the momentum at one point late in the contest. Then, Auburn kicker Jim Von Wyl ended the showdown for good with a 38-yard field goal with two seconds left.

RELATED: Auburn’s First Iron Bowl at Jordan-Hare is a Day to Remember Forever

If you like dramatic college football games, this one was perfect. Unless, of course, you are a Florida State fan.

Auburn football kicked off the frenzied finish when running back Stacy Danley punched it into the end zone for a two-yard touchdown with just under four minutes to play. Instead of trying to take the lead, however, head coach Pat Dye elected to tie the game with an extra point at 17-17.

FSU, who had won three-straight meetings against the Tigers, including the 1989 Sugar Bowl, was as confident as ever, and it looked like the Seminoles were going to pull off the road win. However, on fourth down, they went for it and it turned out to be a disaster. Quarterback Casey Weldon was hit by Ricky Sutton, and he stumbled backwards before falling for a 22-yard loss.

It wasn’t the prettiest kick in the world, but it went in. Auburn escaped with a 20-17 victory.

“That was the biggest kick I’ve ever made,” Von Wyl said. “When I hit it, I thought it was good, but it was kind of tailing off at the end. The win was a big boost for us.”

Von Wyle, who added another field goal in the third quarter, was the hero and Auburn fans went absolutely nuts. Jordan-Hare Stadium went crazy after that second half comeback. If social media existed back then, everyone’s timelines would be flooded with celebration videos.

The decision not to punt officially squandered a 17-7 halftime lead and all but eliminated FSU from the national title picture, while Auburn kept its undefeated season alive. The Tigers ended 8-3-1 that year, including 4-2 in the SEC and a win over Indiana in the Peach Bowl.

Auburn leads the all-time series 13-5-1 over FSU, including three wins in Tallahassee.

During the coronavirus pandemic and COVID-19 outbreak, it’s fun to look back at classic games. There’s no doubt this one belongs high on the list for Auburn.