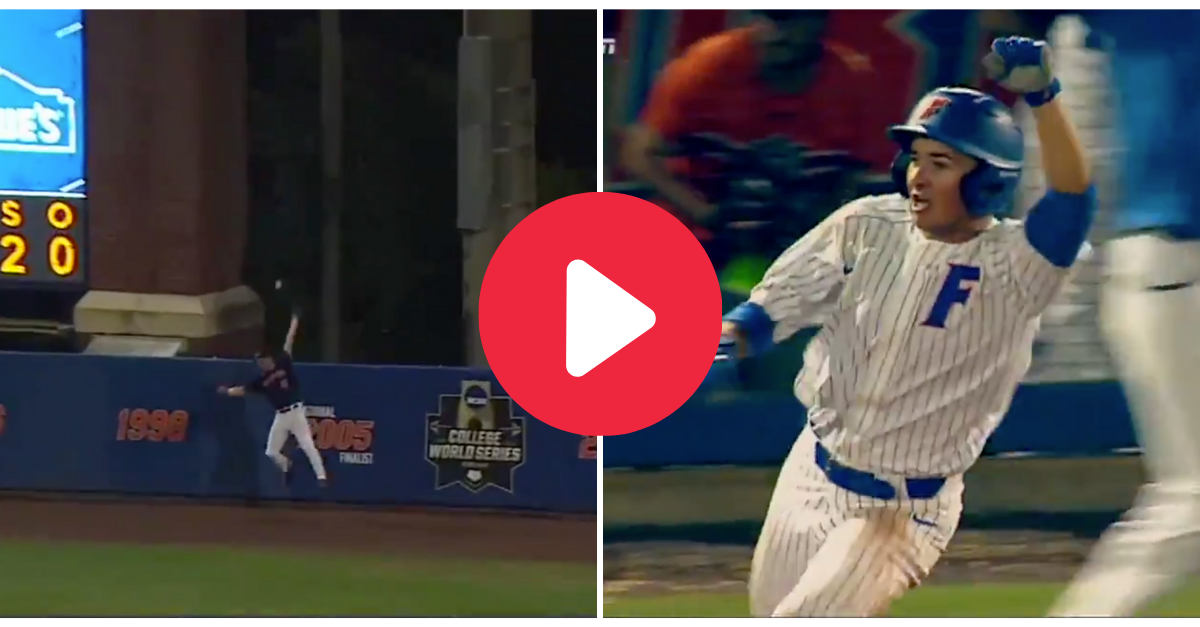 We’ve all seen it before. It’s every outfielder’s worst nightmare. Jose Canseco made it hilariously famous. MLB players to this day are still doing it. It even happens at the college baseball ranks.

You know, the play in which an outfielder turns a fly ball into a home run either using his noggin or glove, thus helping the opposing team. It’s as embarrassing as it sounds and it happens way more than you might think. What looks to be an amazing catch at the warning track is suddenly another run in the box score.

Auburn Tigers outfielder Steven Williams became public enemy No. 1 in The Plains for what transpired back in 2018. Not only did Williams commit this foul act of baseball betrayal to his pitcher, he also inadvertently helped the Florida Gators advance to the College World Series in Omaha, Nebraska.

A fantastic season comes to an unfortunate ending, as the #Gators fall to Arkansas 5-2.

Thank you to #Gators everywhere for your support all season long. 👏 pic.twitter.com/TYVhI2uGyY

Head coach Kevin O’Sullivan‘s UF baseball team was coming off a magical 2017 NCAA national championship season. The following year was shaping up to be something similar.

Florida ran into trouble down the stretch. It lost its last four regular season games, including a sweep on the road to Mississippi State. The Gators were then bounced from the SEC Tournament in Hoover, Alabama, rather quickly by LSU and Arkansas.

At the NCAA Gainesville Regional, Florida took care of the FAU Owls to advance to the Gainesville Super Regional round, which Florida hosted at McKethan Stadium. After splitting the first two games against Auburn, a winner-take-all match decided which SEC team would punch their ticket to the College World Series.

The ending sure didn’t disappoint.

Obviously the most fitting way to send the No. 1 seed into the final #CWS spot! 🤯

For the 1️⃣2️⃣th time in program history, @GatorsBB is headed to the College World Series! pic.twitter.com/Lnt38ZojTE

Florida and Auburn were tied 2-2 as the Super Regional game moved into the bottom of the 11th inning. On a 1-2 fastball down the heart of the plate from All-American closer Cody Greenhill, UF outfielder Austin Langworthy cranked a laser right off the right fielder’s glove over the wall.

Here’s exactly what went through every Florida fan’s head:

Langworthy’s walk-off home run sent the defending national champions back to Omaha and put the Tigers’ season to bed. The hometown hero from nearby Williston, Florida, recalled his thoughts after his swing.

“It’s unbelievable. Right when I hit it, I knew it had a chance,” he told FloridaGators.com.

Steven Williams, the outfielder who ricocheted the ball over the fence, could only hang his head in disbelief and despair. His teammates quickly approached him to offer their support.

“It won’t define him,” Auburn head coach Butch Thompson told USA Today. “It will be part of his journey.”

Back-to-back titles weren’t in the cards for the Gators. They lost to Arkansas in the CWS. Still, Langworthy’s walk-off shot took its place in program history. There might not be a bigger home run in University of Florida history.