“The Gator Flop”: The Bizarre Play That Ignited a Rivalry 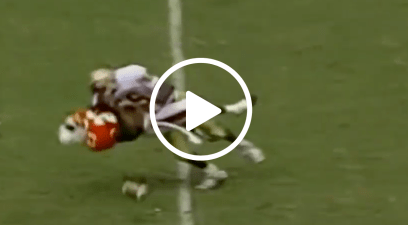 There have been some really, really odd plays throughout the history of college football. Ohio’s 300-pound lineman “cartwheel” trick play was without a doubt the first of its kind. And an ugly 3rd-and-93 is highly unlikely (read: never) to ever take place again.

As football has evolved into its modern version, coaches have gotten more creative with their formations and play calls. I mean, how does one even think of Boise State’s “Statue of Liberty” play, which by the way is the craziest trick play in NCAA football history.

How often do you see a team pull off a bizarre play to give the OTHER team the advantage, going so far as to let their quarterback walk in to the end zone untouched? In 1971, that’s exactly the stunt the Florida Gators pulled against the Miami Hurricanes.

The “Gator Flop” is still one of the oddest plays of all time almost 50 years later.

Believe it or not, Florida and Miami were heated rivals back in the day. This was long before Steve Spurrier‘s Gators went back-and-forth with Bobby Bowden and the Florida State Seminoles in the 1990s. It was the same type of rivalry Miami and FSU have today.

The Gainesville-based UF and South Florida-positioned UM met every year between 1938 and 1987. They skipped their annual clash once during that time in 1943 for World War II.

Powerhouse was the last thing either team was in 1971. Florida lost its first five games and traipsed to a 3-7 record by their final game of the season against Miami on Nov. 27, 1971. The ‘Canes weren’t much better, dropping three-straight games and taking a 4-5 record into the rivalry game.

Miami head coach Fran Curci was in his first season, while Florida head coach Doug Dickey was wrapping up his second.

From start to finish in 1971, the Gators demolished the Hurricanes. By the fourth quarter, Florida took a 45-8 lead following Harvin Clark’s 82-yard punt return for a touchdown. The play wasn’t all that significant except that it gave way to what would become known as the “Gator Flop.”

#GatorGreat John Reaves, who was once the NCAA's all-time passing leader, passed away at 67.

The University of Florida’s bright spot that season was John Reaves. The future NFL quarterback was one of the all-time great college quarterbacks, and he was after an NCAA record.

Reaves was approaching the NCAA career record for all-time passing yards near the end of the game. He entered play needing 343 yards to reach Jim Plunkett’s record of 7,544 passing yards.

But after throwing an interception late in the game, Reaves found himself still 14 yards short of the passing record. Florida had to get the ball back for Reaves to etch his name in the all-time record books. Now that the game was pretty much over, that was all that was on the minds of UF players.

Florida turned to drastic measures to send Reaves back out on the field. When the Hurricanes offense lined up on UF’s 8-yard line and little time left in the game, EVERY FLORIDA DEFENDER LIED DOWN.

That’s right, they just…stopped playing for one play.

“The entire gators defense lies down, letting John Hornibrook go in unmolested. With a two-point conversion, it was Florida 45, Miami 16. As it turns out, there was a motive behind the great lay-down. With John Reaves back in at quarterback he passes to Carlos Alvarez for 15 yards. That’s enough to break Jim Plunkett’s all-time career passing mark.”

It worked. Reaves hooked up with UF wide receiver Carlos Alvarez afterward and eclipsed the record.

Miami’s sideline, however, was not happy.

UM head coach Fran Curci didn’t even shake Florida coach Doug Dickey’s hand as the time ran out. Curci called the play “bush league” and “the worst thing I have ever seen in football.”

“I lost all respect for him as a coach and as a man,” Curci said, per ESPN.

Dickey, however, explained how he tried to get the ball back without his team collectively snoozing on the famed play.

“There were several angles to this ball game. Number one is that our football team came to play and they wanted to win the game very badly,” Dickey told reporters.

“After the game was obviously won, we did not have the record. So it became a matter of having to get the ball back. I called a timeout two times in a row hoping that Miami would throw the ball or run wide where we would have an opportunity.”

Translation: We kicked your ass and even let you score. Stop whining.

Dickey said UF had “no choice” but told reporters the players lied down on their own and not by his instructions. They could’ve have pretended to miss a tackle or make it less obvious at least.

Still, the game was over. Florida wanted the record. That was that.

Florida’s players celebrated all over the field at the old Miami Orange Bowl stadium. They even splashed in the stadium pool after the win to rub it in.

For years to come, Florida and Miami was one of the best rivalries in sports. In 1980, when Miami had the game all but won, Florida fans began pelting UM’s sideline with oranges. So Hurricanes coach Howard Schnellenberger kicked a field goal on the final play of the 31-7 win.

“I always wanted to beat Florida State, but I wanted to kick the Gators’ ass,” former UM defensive lineman Don Bailey told ESPN. “It has to do really with the time after the game, to have to live with the conversation. That state is saturated with Florida fans. It’s not like you could go duck.”

The teams have played each other sporadically since ’87, meeting just seven times in the following 32 years. Florida and Miami, however, are schedule to play a home-and-home series in 2024 and 2025.

I think we can all agree that the 1971 Gator Flop was one of the all-time weirdest plays in a NCAA football game. Even more, it ignited an entire rivalry in the Sunshine State.

This article was originally published March 20, 2020.