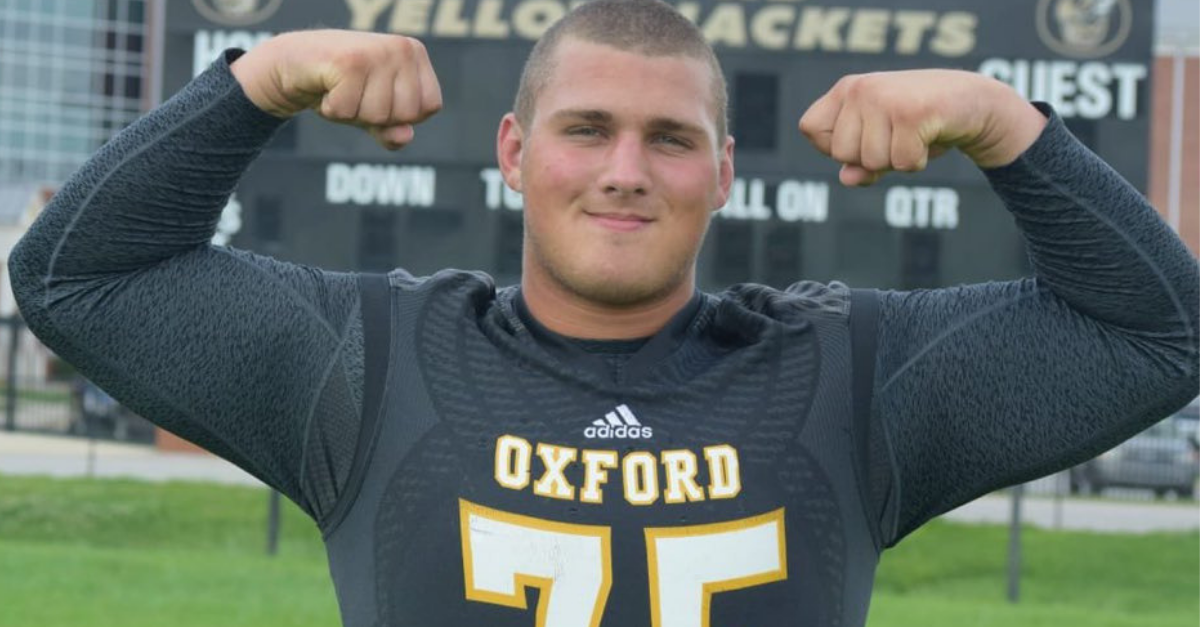 From 2008 to 2017, the top-ranked high school prospect in Alabama stayed home to play for the Alabama Crimson Tide in every season but one — That was when Hueytown’s Jameis Winston decided to play for Jimbo Fisher and the Florida State Seminoles in 2012. For the second year in a row, after wide receiver Justyn Ross committed to Clemson last season, Alabama is missing out on the state’s best player.

Oxford High School star offensive lineman Clay Webb is the only five-star prospect in Alabama for the 2019 recruiting cycle, according to 247Sports. The top-ranked center in the country is a plug-and-play type of athlete who should win multiple awards at the college level and will likely jump to the NFL when the time comes. However, Clay Webb won’t be staying home in Alabama next season, and his commitment signals the wave of change that’s sweeping over the Southeastern Conference.

The senior will likely make his third-straight Alabama All-State football team after his Oxford Yellow Jackets finished with a 10-3 record and reached the quarterfinals of the Class 6A state playoffs this season.

At a ceremony in front of his classmates at the Oxford High gym, Webb announced that he would pass on teams like Clemson, Auburn and Alabama when he committed to play college football for the Georgia Bulldogs.

BREAKING: Five-star OL Clay Webb has committed to #UGA over #RollTide , #Clemson and #Auburn. https://t.co/aH5WBirRqV has all the news. pic.twitter.com/T8YLKlC87e

RELATED: Alabama-Georgia Has Become the SEC’s Most Important Rivalry

Webb said he will report to the University of Georgia immediately so he can participate in bowl game practices, which forces him to skip the Under Armour All-American Game in January. The deal clincher was Webb’s relationship with Georgia offensive line coach Sam Pittman, who Webb praised for being “trustworthy.”

With Webb joining the Bulldogs, that gives head coach Kirby Smart the nation’s No. 1 overall player in defensive end Nolan Smith and the No. 1 center in Webb, as well as No. 1 running back Trey Sanders and No. 1 wide receiver Jadon Haselwood potentially in the mix, too.

The Bulldogs have secured commitments from four five-star players prior to the NCAA’s Early Signing Period, and this recruiting class is proving one big, fat fact: the Alabama Crimson Tide’s stranglehold on the recruiting trail in the Southeast might be coming to an end.

Alabama coach Nick Saban will still pull some of the best players in the country year after year, but with Alabama, Georgia, LSU and Texas A&M holding the top four recruiting classes for next season, things aren’t going to be so one-sided anymore.

Clay Webb wasn’t the first domino to fall, but his jump out of Alabama over to Athens, Georgia is a sign that things are changing faster than we think in the SEC.