Eric Zeier Rewrote Georgia’s Record Books. Where Is He Today? 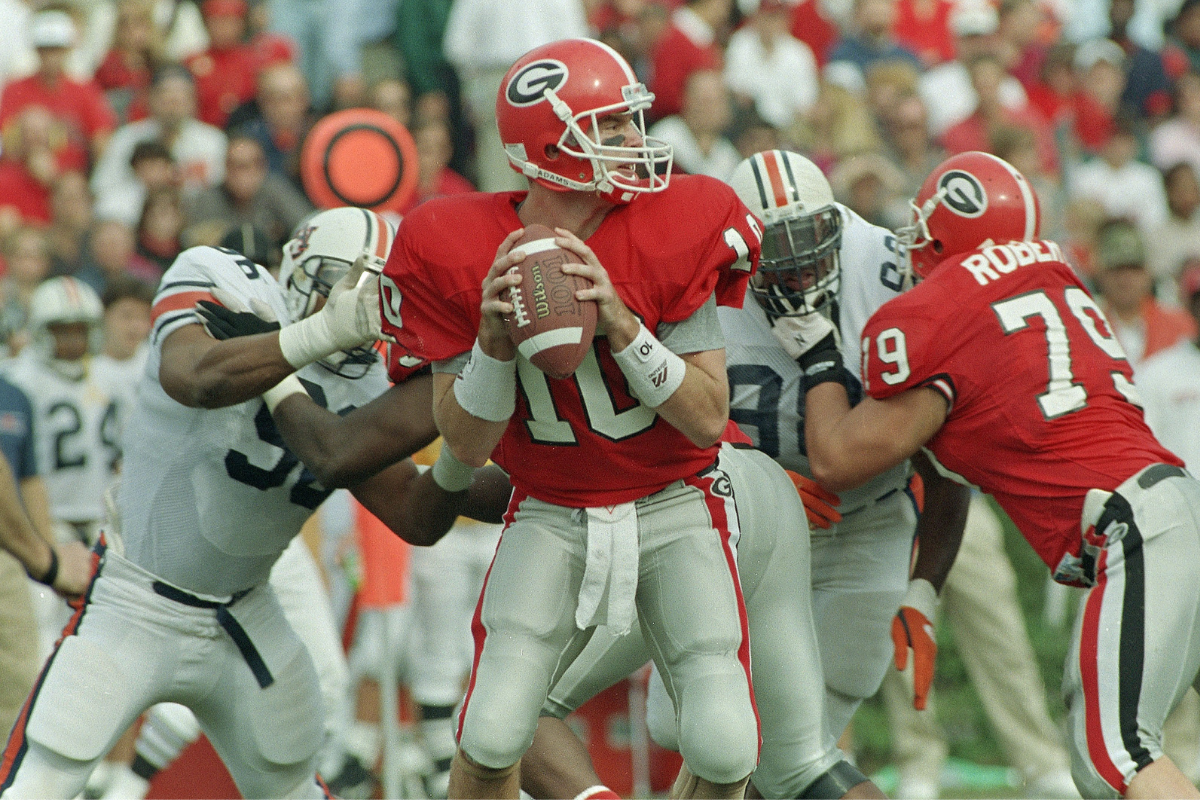 Five games. That’s all it took for former Georgia Bulldogs quarterback Eric Zeier ? a nationally-scouted, five-star high school recruit homegrown in Marietta, Georgia ? to supplant returning starter Greg Talley as the frontman in Athens. But this wasn’t a plug-and-play scenario; Zeier, a true freshman, came off the bench to upset sixth-ranked Clemson, lighting up the Tigers for 249 yards and two touchdown passes.

There was no doubt whose team the Bulldogs were from that moment on.

OTD in 1993, Eric Zeier threw for an SEC Record 544yds vs Southern Miss! His record still stands as the most passing yards in a single game! pic.twitter.com/SaPk9MnO9J

After taking over during the 1991 season, Zeier lit the Southeastern Conference on fire. With Garrison Hearst at running back, who was joined in the backfield by Terrell Davis the following year, Georgia went 19-5 in Zeier’s freshman and sophomore campaigns. Beating Ohio State in the Citrus Bowl and finishing the year ranked No. 8 in the AP Poll put the University of Georgia into the national title picture heading into 1993.

While things didn’t go as planned on the scoreboard ? Georgia started the year 1-4 and finished just 5-6 ? Zeier couldn’t be stopped. He threw for 3,525 passing yards as a junior, which stood as Georgia football’s single-season record for 19 years. In a 54-24 win over Southern Mississippi, Zeier exploded for 544 passing yards ? That mark remains the SEC record as of the 2019 season.

Georgia struggled as a team once more during Zeier’s senior season, but again, there was no stopping No. 10 on the field. He tacked another 3,396 passing yards and 24 touchdowns passes onto his career totals, finished 7th in the Heisman voting, and was named First-Team All-American.

Zeier was the first to reach the mark, and only five QBs in SEC history have 11,000 career passing yards ? UGA’s Aaron Murray and David Greene, Florida’s Chris Leak and Tennessee’s Peyton Manning.

The two-time Heisman finalist set 67 school records and 18 marks in the Southeastern Conference ? Every record from passing yards to consecutive pass attempts without an interception (176) was Zeier’s. Some still stand, but many have been eclipsed in today’s pass-happy world of college football.

Only rookie QB that Bill Belichick has started in 21 years as a HC? Eric Zeier. UGA alum went 1-3 for the '95 Browns. pic.twitter.com/V4vXo5VHYJ

RELATED: Champ Bailey Married a Model and Rode Off Into Retirement Life

The Georgia star was selected 84th overall in the third round of the ’95 draft by the Cleveland Browns, who were coming off an 11-5 season being coached by a young Bill Belichick.

Midway through Zeier’s first year, in which he started four games, owner Art Modell infamously announced he’d be moving his professional football team to Maryland the following season. Belichick was fired in February 1996, and the Browns became the Baltimore Ravens.

Zeier didn’t see the field much for the fledgling franchise, playing behind veterans Vinny Testaverde and Jim Harbaugh for the next three seasons. When Brian Billick took over as head coach in 1999, Zeier moved on and signed with the Tampa Bay Buccaneers. After two seasons in the shadows down in Florida, he briefly signed with the Atlanta Falcons before retiring from professional football.

Could you imagine if Belichick was given time to groom Zeier? I’m just saying…

Where Is Eric Zeier Today?

After football, Zeier returned home to the University of Georgia where he joined Scott Howard as Georgia football’s radio broadcast team, replacing the legendary Larry Munson in 2008.

It’s not hard to miss Zeier’s voice on game day. The University of Georgia’s radio shows list Zeier as a co-host on “Bulldogs Live with Coach Smart,” a Thursday night preview show, as well as the “NAPA Bulldog Tailgate Show” and “Ford Drive to Kickoff” during the pregame. After his role as color analyst alongside Howard’s play-by-play, Zeier joins host Neil Williamson for the “Regions Locker Room Show” during the postgame.

According to Zeier’s LinkedIn home page, he previously worked in regional sales for Bank of America and Academy Mortgage Corporation. As of January 2020, Zeier is listed as a Regional Manager with Homeowners Financial Group based in Atlanta.

Few players in Georgia history deserve more recognition than Eric Zeier. Without his record-setting NCAA days to light the torch, the long run of great Dawgs passers from Mike Bobo to Quincy Carter to David Greene to D.J. Shockley to Matthew Stafford to Aaron Murray to Jake Fromm might not have happened.

MORE: How Did Stetson Bennett Earn His ?Mailman? Nickname?