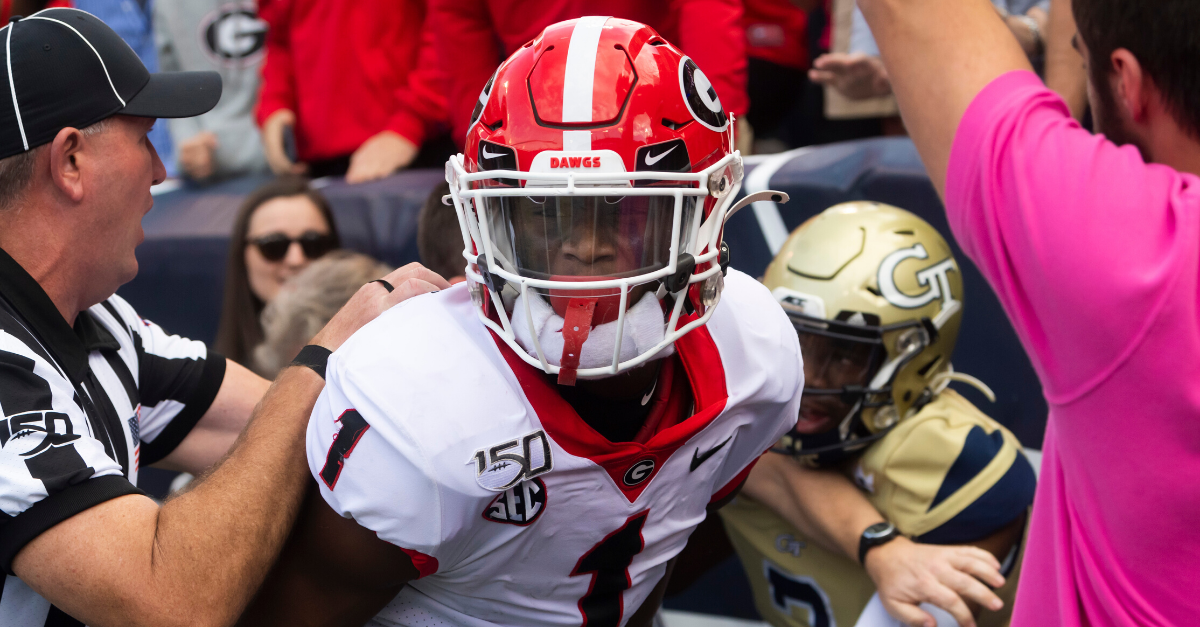 The Georgia Bulldogs controlled “Clean, Old-Fashioned Hate” from the opening quarter. The College Football Playoff committee’s fourth-ranked team dominated in-state rival Georgia Tech, 52-7, to secure the program’s third-straight 11-win season. The day wasn’t without miscues for the Dawgs, including losing three fumbles and failing to recover an onside kick, but those didn’t put Kirby Smart’s team in any real danger during Saturday’s game.

However, Georgia wide receiver George Pickens earned himself an ejection, and it will cost his team in a big way with the SEC Championship Game one week away.

Late in the third quarter, quarterback Jake Fromm tossed his fourth touchdown pass, this time finding Dominick Blaylock for a nine-yard score. The pending extra point would put UGA in complete control up 38-7 at that point. On the opposite side of the end zone, however, George Pickens became tangled up with Yellow Jackets defensive back Tre Swilling. Both players began pushing and shoving, which escalated into throwing punches before officials stepped in and diffused the brawl.

As a result, Pickens was thrown out of the second half of that game, and per NCAA rules, he will be suspended for the first half of next week’s SEC Championship game in Atlanta on Saturday, Dec. 7.

Georgia WR George Pickens will be suspended for the first half of the SEC Championship after this fight today.

He leads the team in receiving yards and TD. pic.twitter.com/etNgh746dc

Pickens was already suspended by Kirby Smart for the first half of that Georgia Tech game for a violation of team rules, but the freshman couldn’t control himself after playing less than one quarter of football. He did catch a 41-yard touchdown pass in the game, but that’s not going to cover for one, huge brain fart.

Not only is Pickens out for a portion of a must-win game if UGA wants to reach the College Football Playoff, but the Bulldogs leading receiver Lawrence Cager is likely to miss the entire bowl season with an ankle injury.

“I mean, don’t be stupid. It’s just silly, it’s selfish, it’s undisciplined. It’s, ‘Why?’ You ask yourself why. Why would I give up an opportunity over what we have next week? Over what? I always ask guys, ‘Was it worth it?’ That’s what I always say. ‘Was it worth it?’ It’s not worth it to me when you hurt the team.

“But you live and you grow up and you love them. And look, I love George Pickens. He went to the hospital with us on Friday and did an unbelievable job. He had as much charisma and as much care for those kids as anybody we had there. George is a great kid. He’s a freshman.”

Pickens wasn’t the only casualty in this side-of-the-field scuffle, either. In the melee, a photographer named Perry McIntyre was caught in the crossfire. According to GoFundMe Page launched by McIntyre, he details how the players unintentionally broke his lens and Nikon D500 camera, which the retired teacher and wildlife photographer, who’s shot Georgia games for 40 years, called “my livelihood.”

McIntyre estimates it will cost him just over $7,000 to replace his equipment.

Trying to get back in action after getting caught in the middle of Saturday's "disagreement." Any consideration GREATLY appreciated! https://t.co/cFSDq5gT6e

Georgia prepares to face its toughest test when the LSU Tigers meet them for the conference title. Unfortunately, this lapse in judgement costs the Bulldogs’ offense a key playmaker on the outside for an entire half of football, too.