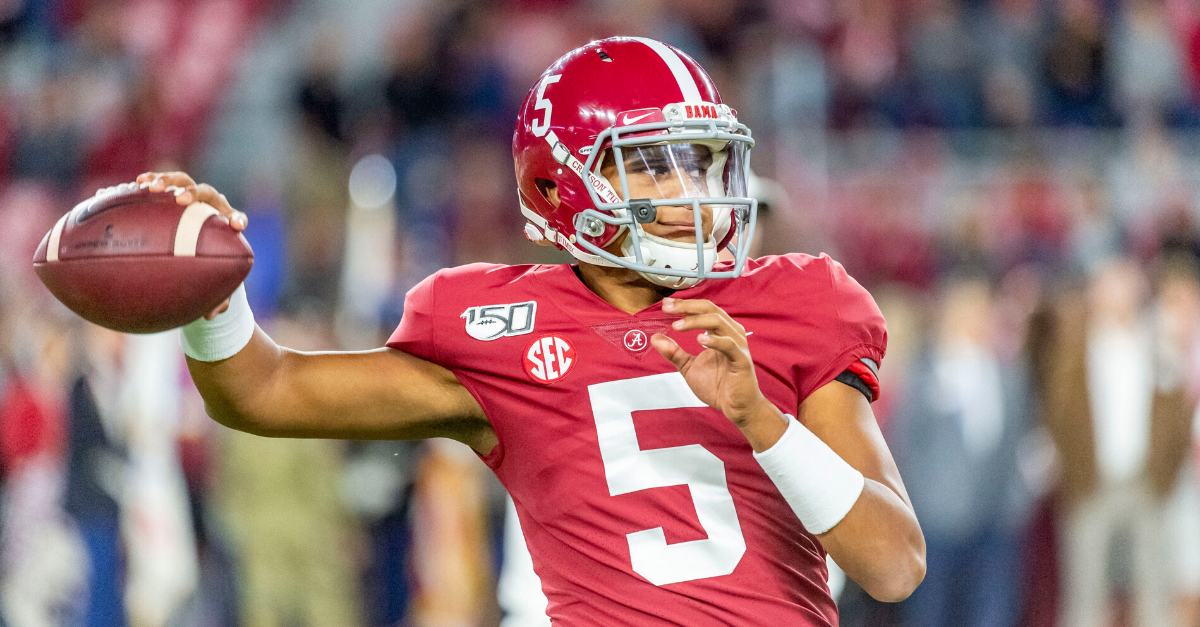 UPDATE (May 15, 2020): Shortly after entering the NCAA Transfer Portal, Taulia Tagovailoa announced his transfer destination after his freshman season of college football with the Alabama Crimson Tide.

Per current NCAA transfer rules, Tagovailoa would be required to sit out the 2020 season. However, with the rapid changes to eligibility waivers in the college game, that could change before the start of the year.

According to The Athletic’s Chris Kirschner, Taulia Tagovailoa mentioned “on multiple occasions” his commitment to Alabama was only because his older brother was there, making it “easier on his parents to go to games.” All that is changed, however.

Maryland was considered one of the betting favorites to land Tagovailoa.

The following article was originally published May 15, 2020.

I don’t have an older brother, but I did have cousins who mercilessly dunked on me in driveway basketball. Being the younger sibling means you’re the perennial underdog and follow the path carved by big brother or sister ? Eli might not be Peyton, but Serena definitely surpassed Venus.

Most younger siblings fight an uphill battle, and sophomore quarterback Taulia Tagovailoa is no exception.

We all know his older brother. Tua Tagovailoa delivered the famous walk-off touchdown pass in the 2018 College Football Playoff National Championship, finished as Heisman Trophy runner-up the following year, and is the best statistical passer in Alabama Crimson Tide history. Had the infamous hip injury not cut his collegiate career short, Tagovailoa likely would have surpassed A.J. McCarron’s career yardage mark at Alabama ? Tua ranks No. 3 in career passing yards and No. 1 in touchdown passes in school history.

Tagovailoa landed with the Miami Dolphins as the No. 5 overall pick of the 2020 NFL Draft. He’ll likely “redshirt” behind 15-year NFL veteran Ryan Fitzpatrick in order to fully heal, get into game shape, and learn an NFL offense before taking over in South Florida.

The Tagovailoa family followed Tua from Saint Louis High School in Ewa Beach, Hawaii, to Tuscaloosa. That led Taulia to Thompson High School in Alabaster, Alabama. He then followed big brother to the University of Alabama, finishing his true freshman season 9-of-12 for 100 yards and his first touchdown pass in garbage time against Western Carolina.

Once again, little brother is on the move just like big bro.

Not even 24 hours after the younger Tagovailoa’s transfer news, oddsmakers started turning the wheels on where he’d end up. Not surprisingly, most of the favorites according to Sportsline Oddsmakers (via 247Sports) all play in The Sunshine State.

But where should Tagovailoa transfer? He’ll have to redshirt during the 2020 season , but what team, system and environment best suits his talents? Here are five schools I’d like to see Tagovailoa end up at to help him grow as a passer, but also give him a chance to move out of big brother’s shadow.

It's Great To Be A Tennessee Vol 🍊 pic.twitter.com/fHc4vqod9n

Don’t look now, but the Volunteers are building something really special for 2021 and beyond.

Yes, things haven’t been all sunshine and rainbows under Jeremy Pruitt. Playing in the SEC will do that to you, but Tennessee holds 2021’s No. 2-ranked recruiting class and inked the 10th-ranked class nationally for next season. Incumbent starter Jarrett Guarantano enters his final season, and while sophomore Brian Maurer looks like the heir apparent, he struggled in spots last season. This job is wide open.

That feeling when you're a #NFLDraft pick 🗣🗣🗣 pic.twitter.com/O6OZYYHVKi

Truthfully, I’m not as high on the Miami Hurricanes as many others. This is the geographically obvious choice for Taulia with big brother also playing in the 305. However, Miami’s roster might not have room for another QB.

This season is graduate transfer D’Eriq King’s show. In 2021, both N’Kosi Perry and Tate Martell will be redshirt seniors. You figure at least one of them will be on the roster and be the frontrunner for that season’s starting job. True freshman Tyler Van Dyke is on campus this year, and ESPN’s No. 2 pro style quarterback recruit is Manny Diaz’s guy for the near future.

Tagovailoa could get lost on the depth chart here, but then again, the same thing happened at Alabama.

Guess whose birthday is today…

Join us in wishing a happy birthday to OUR COACH @Lane_Kiffin! #HottyToddy pic.twitter.com/5BN79nzCEc

With both Matt Corral and John Rhys Plumlee are on the roster, conventional college football wisdom tells us one will likely transfer. While this situation doesn’t seem ideal for Tagovailoa, this wouldn’t be his first encounter with both Kiffin and the Ole Miss Rebels.

During his time at FAU, Kiffin offered Tagovailoa a scholarship. On the flip side, Ole Miss and former head coach Matt Luke extended the same to Thompson High School’s record-setting quarterback.

If the Rebels make this splash, and Tagovailoa has any inkling to stay in the SEC West, what a reunion the Alabama-Ole Miss game would be.

Before you read me his record at Florida State, keep in mind that Taggart inherited a football program completely gutted and devoid of an identity in the wake of Jimbo Fisher. He was doomed from the start, but Taggart knows offensive football.

A former quarterback in his playing days, Taggart returns to a mid-major conference where he thrived at USF, re-building the Bulls from a 2-10 record his first season to a 10-2 power in four years before taking the Oregon job. Tagovailoa’s arm talent and accuracy could flourish in Conference USA.

"It feels like I'm part of a unique family full of coaches who are hungry to learn, grow and be great" – @P5White

Former Clemson offensive coordinator Jeff Scott is taking the reins in Tampa, Florida. Bringing the knowledge and wisdom learned over five CFP appearances and two national titles to the USF Bulls is something Tagovailoa could thrive on.

USF is rebuilding after the failed Charlie Strong experiment, and Scott needs a quarterback who can run his offense. Who better than a kid who tutored under Nick Saban?

The ceiling may be limited here, but Tagovailoa could make a splash in the American Athletic Conference and gain national attention should he command a high-powered Bulls offense.