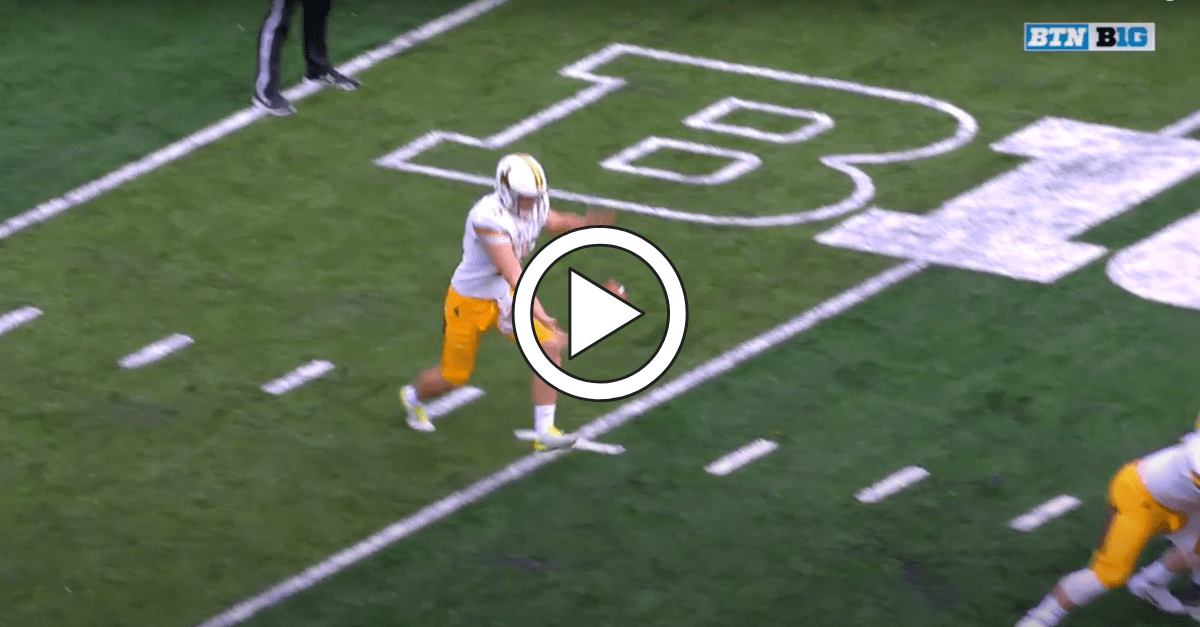 Punters and kickers aren’t exactly known to be the greatest athletes. Time and time again, football fans have witnessed them suffer scary injuries, take a swift kick to the face (ouch, Antonio Brown) and just flat-out embarrass themselves.

That isn’t always the case, of course. Former Penn State kicker Joey Julius proved you can be the size of a lineman yet still boot a ball downfield and lay out the man who catches it. And let’s not forget how Washington Redskins’ Hunter Smith pulled off the insane fake field goal AND fake punt on one play.

One person who isn’t helping the case is Tim Zaleski.

This play absolutely deserves a spot on the all-time Sportscenter Not Top 10.

Iowa was facing off against Wyoming in 2017, and Wyoming was putting up a pretty good fight against the Big Ten powerhouse. That was until things went south quickly for Wyoming, as punter Tim Zaleski completely whiffed on an attempted kick.

The result? Basically rolling the ball right into an Iowa player’s arms.

The official yardage on this embarrassing punt attempt…a whopping NEGATIVE five yards. Iowa scored after Zaleski’s miscue and ended up winning the game, 24-3.

So, exactly what happened on this play? How does an NCAA kicker fail so miserably?

?I kind of rushed it,? the then-true freshman punter told the Casper Star Tribune. “I caught it wrong and everything and went to get the laces up for my drop, and it just rolled off my hand.?

Zaleski’s unforgettable moment made him a viral sensation. He said his phone had blown up during the game. For all the wrong reasons unfortunately.

?It is very weird,? he said. ?People were like, ?Hey, no publicity is bad publicity. You?re famous now.? I just went along with it, laughed it off.?

The good news is Wyoming didn’t immediately cut Zaleski. He played in 2018, but I think it’s safe to not expect him in the NFL anytime soon.

MORE: The Punter-Kicker Trick Play TD That Fooled Everyone