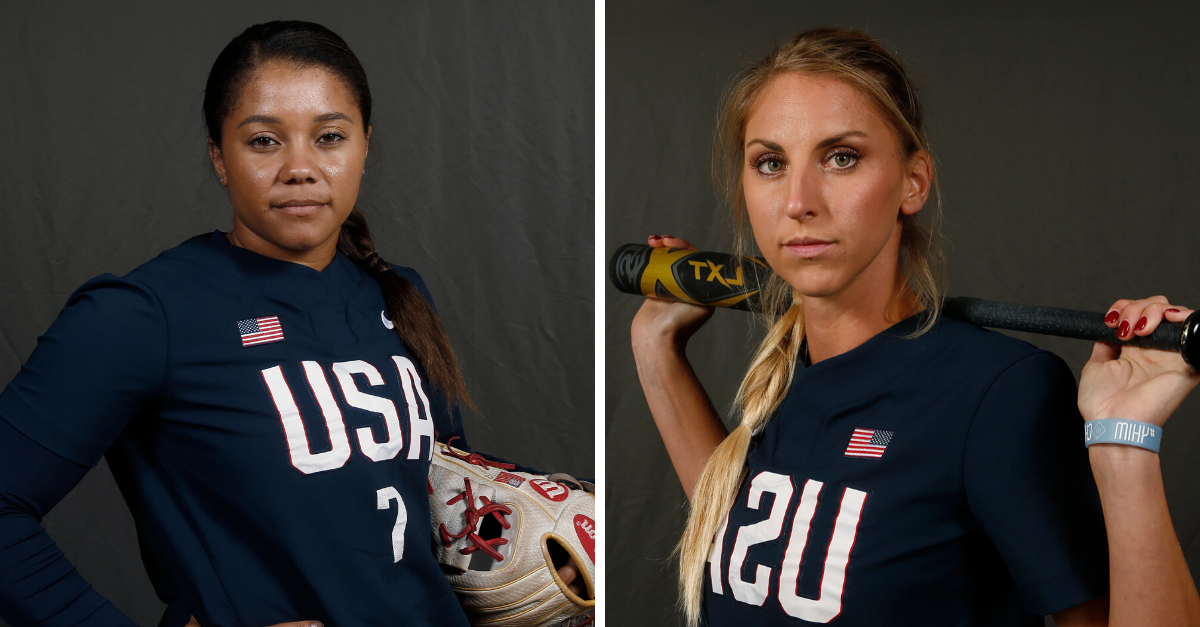 Professional softball players have worked their butts off to elevate their sport over the last decade. The Women’s College World Series garners millions of viewers every year. Players like Jennie Finch, Cat Osterman and Monica Abbott took it international at the Olympics in the 1990s and early 2000s.

Despite most professional players making less than MLB bat boys, these women dedicate their lives to the game they love. It would take a whole lot for these girls to quit the team they play for.

Yet as we’re finding out, one “disgusting” tweet is all it takes.

Pro softball players across the country are in uproar over a national anthem tweet aimed at President Donald Trump sent out from the Scrap Yard Fast Pitch Twitter account. Not only did players voice their opposition, but they cleaned out their lockers.

What Is Scrap Yard Fast Pitch?

🎥📸 Media Day 2020 is in the can! #BetterTogether pic.twitter.com/oCyBA2dhqZ

They used to play in the National Pro Fastpitch league as the Scrap Yard Dawgs out of the Houston area but became independent after the 2017 season once the NPF terminated the franchise for violating league rules.

The team is well-known for signing Olympian Monica Abbott to a record six-year, $1 million contract in 2016.

Just before the Scrap Yard Fast Pitch began a seven-game series against the USSSA Pride on Monday in Florida, a tweet was sent out from the team’s Twitter account @ScrapYardFP. It tagged Trump and acknowledged how every player was standing for the national anthem and “respecting the flag.”

The tweet was allegedly sent out by Scrapyard Dawgs general manager Connie May, and players were livid. Of course, this has everything to do with Trump’s response to when Colin Kaepernick began kneeling during the anthem in 2016 to protest racial injustice and police brutality.

That has once again become a hot topic after George Floyd’s death sparked protests across the United States during the coronavirus pandemic.

I DO NOT support the comments made during our game by @scrapyardfp & I will not represent them. We as a people are working towards change, and THIS IS NOT IT. pic.twitter.com/ziSTiYxuzQ

Scrap Yard players, as well as pro softball players around the country, were outraged over the politically-injected tweet because they had no say in the matter. A lot of them felt like they were misrepresented, blindsided and disappointed because protests were never about the flag.

I am so hurt but Hate and Ignorance will never win. pic.twitter.com/81tV29G4HH

…. I AM HURT … I am disgusted … as a BLACK softball player I DO NOT … DO NOT stand with a statement like this… if you didn’t understand racism and what was going on the last month. This .. THIS IS IT. This is EXACTLY what we’ve been trying to change pic.twitter.com/udoeaSJFwp

Tonight we were misrepresented by Connie May who acted on behalf of @ScrapYardFP I’m appalled by the insentivity & will not represent Scrap Yard ever again. I’m so sorry to all my friends & teammates and the future softball players that are hurt by this. pic.twitter.com/39B1CaO9uh

I do NOT support the comments made by @ScrapYardFP and I will not associate myself with an organization that stands by those beliefs. BLACK LIVES MATTER. I will not be spoken for on this issue and I am appalled that after a game I was blindsided by something so disheartening.

Seriously fuming right now😡🤬 @ScrapYardFP you are better than this! Haven’t we been going over this for the last 3 weeks? This is not funny at ALL! Has nothing to do with respecting the flag and ALL to do with respecting ALL Americans in this country regardless of color of skin pic.twitter.com/cdymUwWRsH

We might be standing in this photo but we SURE AS HELL AREN’T STANDING FOR THIS. I’m embarrassed. I’m heartbroken. I’m DISGUSTED. @ScrapYardFP I will never be associated with your organization again. BLACK LIVES MATTER. The tone deafness on this is UNBELIEVABLE!!!!!!! pic.twitter.com/5jSNipTFLd

HEARTBROKEN. DISGUSTED. SAD. This is SICKENING!!!!!! I am so sorry for all my friends and their teammates that were misrepresented by this tweet. pic.twitter.com/18QCzKDWbI

RELATED: Jennie Finch Was the Queen of Softball. Where Is She Now?

According to reports, Scrap Yard players cleaned out their lockers after the game and won’t play the rest of the series’ games. May deleted the tweet and attempted to address the team but players walked out.

Owner/GM Connie May tried to address the team postgame and the players walked out. They will also not return any of their gear that has their names on it as they don’t want to be affiliated with tonight’s actions.

On June 2, the team’s account tweeted a message about Black Lives Matter. It read that “we believe black lives matter, as do all lives.” Any sentiment in that seems empty now.

Who Is Connie May?

The tweet was allegedly sent out by Scrap Yard’s general manager, Connie May.

May has served as the team’s GM since 2015. Her daughter, Meagan May Whitley, was an All-American softball player at Texas A&M and played on the 2011 USA National Team.

According to May’s LinkedIn, she attended Texas A&M University in the 1980s and worked for constructions and energy companies in IT and accounting prior to becoming a softball coach.

May hasn’t tweeted anything else from her or the team’s account. She also hasn’t apologized yet, but one can expect that will be coming soon.