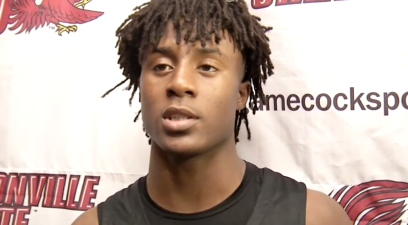 There are some seriously badass girl athletes out there. This softball player with a bazooka for an arm is someone you probably shouldn’t play dodgeball against (unless you’d like to end up black and blue all over).

The woman who struck out Babe Ruth and Lou Gehrig (BACK-TO-BACK!) deserves some mad kudos as well. And don’t even think about trying to out-lift this 15-year-old girl who is already benching a ridiculous 355 pounds. Heck, or this chick who threw a football 40 yards and earned a pro football contract.

On the gridiron, Sam Gordon has drawn national attention for her ankle-breaking cuts and blazing speed. She even starred in the NFL100 Super Bowl commercial. But how often do you see the girl version of Madden’s truck-stick feature on the football field?

Yes, one of the biggest bone-crushing hits of all time took place in a high school powderpuff game.

Feel free to call her Derricka Henry, Marsha Lynch, Todd Girly and whatever else you can come up with.

Payton Woodward was just partaking in a nice, easy girls’ flag football game at Arkansas’ Fayetteville High School in 2017 when she decided to completely end an opponent’s career. What was that poor girl thinking trying to stop this girl who was clearly on a mission and wouldn’t be denied?

To make things worse for the other team, Woodward basically carries players on her back as she heads toward the end zone. Someone finally grabs her flag, and they must feel like that kid who won the golden freakin’ ticket in Charlie and the Chocolate Factory.

NFL teams should be lining up to sign this free agent to the practice squad, because sheesh.

This post was originally published on April 21, 2017, but this hit will stand the test of time.

MORE: The Girl Who Struck Out Babe Ruth and Lou Gehrig