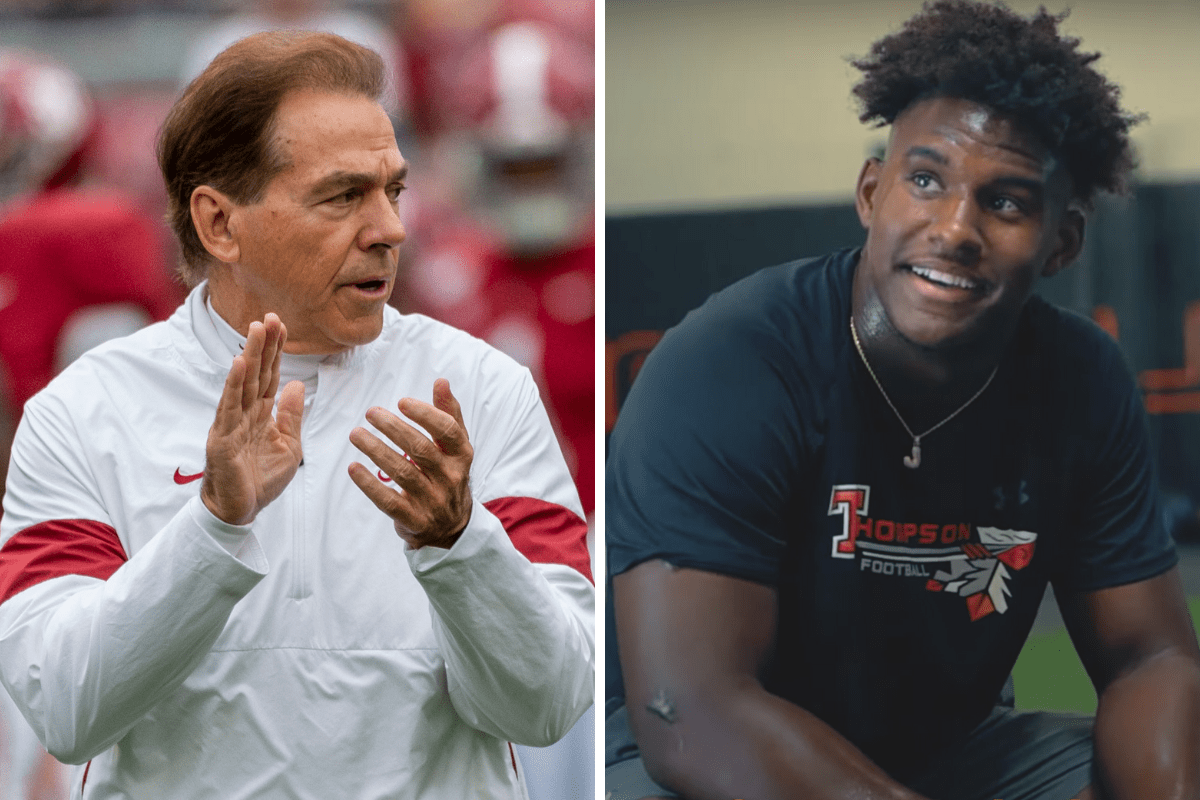 Nick Saban is always one step ahead of everyone else when it comes to college football recruiting.

The Alabama Crimson Tide head coach once sent Alvin Kamara 105 recruiting letters in one day and even danced the Cupid Shuffle for a big-time recruit, proving he will do just about anything to construct the best recruiting class in the country every year.

After locking up the No. 2 class in the nation—which included top overall football player and No. 1 quarterback Bryce Young—behind the Georgia Bulldogs in 2020, Saban quickly focused on the future of Alabama football. He’s been busy picking up top recruits in the 2022 class.

Five-star defensive end Jeremiah Alexander committed to the Crimson Tide on March 9, 2020, marking Alabama’s first 2022 commit. The sophomore out of Thompson High School in Alabaster, Alabama, is rated the No. 16 overall prospect, No. 1 weak-side defensive end and No. 1 player in the state of Alabama.

While the athletic gifts are there, it’s Alexander’s personality that makes him special, according to Thompson High School coach Mark Freeman.

“Jeremiah, he’s got that internal drive to be great for himself and to reflect off on his teammates in a positive manner,” Freeman told 247Sports. “He’s just a great, great kid from a great family. He’s got a really good head on his body, his priorities are right, and he’s just very grounded. He’s a very mature guy to be a sophomore in high school. God’s really blessed him with talent, and he’s taken the talent and not let it go to his head. He’s really a great person.”

Alexander made his way to Tuscaloosa for the University of Alabama’s junior day in February and apparently was blown away enough to commit to Saban’s program the following month.

He did, however, waver on that pledge.

Alexander has already posted some eye-popping numbers despite having one more year before graduating high school.

As a junior, he totaled nine sacks and a ridiculous 31 tackles for a loss. He was just as good as a sophomore, when he racked up nine sacks, 25 tackles for a loss and 119 tackles overall in addition to helping Thompson win a state title. He even recorded an interception and returned it for a touchdown. In his first two seasons of varsity football, he posted 15 sacks, 193 tackles and five forced fumbles, according to statistics kept by MaxPreps.

According to 247Sports‘ evaluation, he has all the makings of a potential top draft pick:

“Already fairly developed with well-proportioned muscle mass on a good-sized frame with long arms. Is advanced physically and looks to be ahead of the curve from a developmental standpoint. Has been a highly productive player for one of the top high school programs in Alabama. Is primarily deployed as a standup edge rusher. Plays with advanced strength with the ability to drive offensive linemen into the backfield and disengage on command. Also has high-level quickness and play speed both off the edge and in pursuit. Looks to play with a high effort level and finds several ways to impact the game. Despite being well-coached, will need to continue honing his technique as a pass rusher. It will be interesting to see where he ends up in terms of ultimate size over the next few years, as he could grow into a full-time edge defender or play as a space linebacker. Projects as a multi-year starter at the Power Five level with the upside of developing into an early round NFL Draft pick.”

Whether Alexander ends up playing outside linebacker or defensive end at the next level, he’ll likely be a stud. Hopefully for Crimson Tide fans, he’s Alabama’s next great defensive talent.

Regardless, Alexander’s commitment is a big win for Saban over SEC rivals like Auburn, LSU and Georgia.

UPDATE (October 28, 2020): Alexander, one of the most coveted prospects in the 2022 class, backed off his pledge to the Alabama Crimson Tide on October 27, 2020. The five-star defensive end announced the news on his Twitter account.

“At this time I would like to de-commit from The University of Alabama. I am 100% focused on getting another ring with my brothers. NO LOVE LOST towards my Bama family!” he wrote on social media.

Alexander has offers from SEC West schools like Auburn and LSU, but it’s unclear if he’s leaning toward another school.

UPDATE (July 9, 2021): Alexander must have thought long and hard since October and decided it doesn’t get better than Nick Saban and the Alabama Crimson Tide. He’s staying home.

“Our relationship never fell out about me de-committing,” Alexander told 247Sports earlier this year. “It was just about me wanting to focus on my high school career and stuff like that. It’s at home. And Bama, they’re gonna put you in the league and they’re gonna win championships. You can’t go wrong with that.”

Jeremiah Alexander is a massive recruit, and he could be an impact player in year one or year two. And about those championships…he’ll probably win one. Nick Saban seems to know how to do that quite often.

This post was originally published on March 9, 2020, but was updated after Alexander re-committed to Alabama.