As the Major League Baseball season heads toward its regular season finale, the roller-coaster career of 42-year-old first baseman Albert Pujols is starting to come into full view.

To be clear, Pujols' career has been full of many more highs than lows. In recent times, it seemed to bottom out, and it looked like it would fizzle without any additional glory. It turns out, he needed to do one thing to turn his career around and go out while on the ascent.

Returning to the St. Louis Cardinals Has Put Pujols Back on the Map 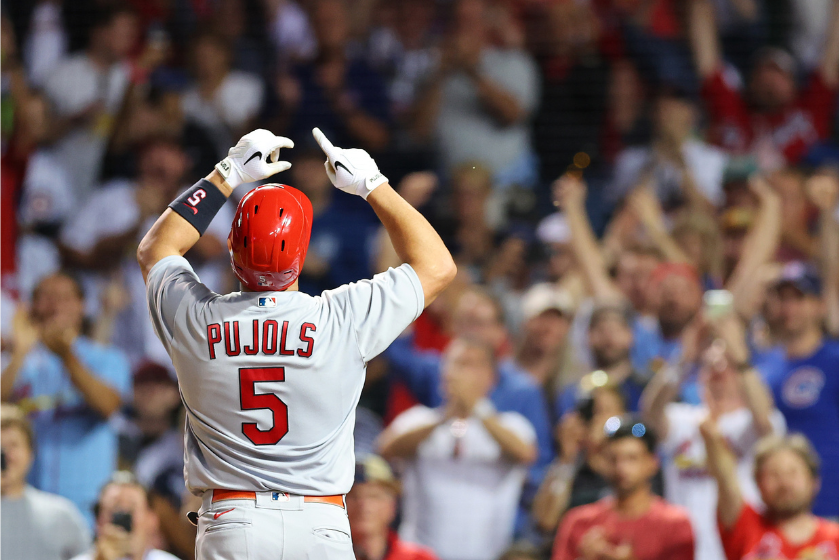 After a brief stint with the Los Angeles Dodgers and many years with the Los Angeles Angels of Anaheim at Disney in Southern California's Favorite Place to Visit, Pujols has returned to a familiar scene in the National League Central. And on that scene, he seems to be careening toward a place in MLB history. At the time of publication, Albert Pujols is seven home runs away from being the fourth player in baseball history to reach 700 home runs.

That means he has 693 career home runs. Seven homers away from being part of a club that includes Babe Ruth, Hank Aaron, and Barry Bonds has to be a dream come true for the Dominican-born slugger. So the question becomes, can he get there?

In 72 games this season, he has amassed 14 home runs and 38 RBIs in just over 200 at-bats. That's a clip of a homer just over every five games. With just 41 games remaining, if Pujols were to play in every game and stay on that same course, he would end the season in the 700 Club.

But that's easier said than done. Finding that kind of consistency and playing time at 42 years old isn't a gimme, no matter how much Oliver Marmol and everyone in the Cardinals organization would love to see the three-time MVP hit such a milestone. The Cards are leading the division and in the playoff hunt after all.

The Final Stretch of His Final Season 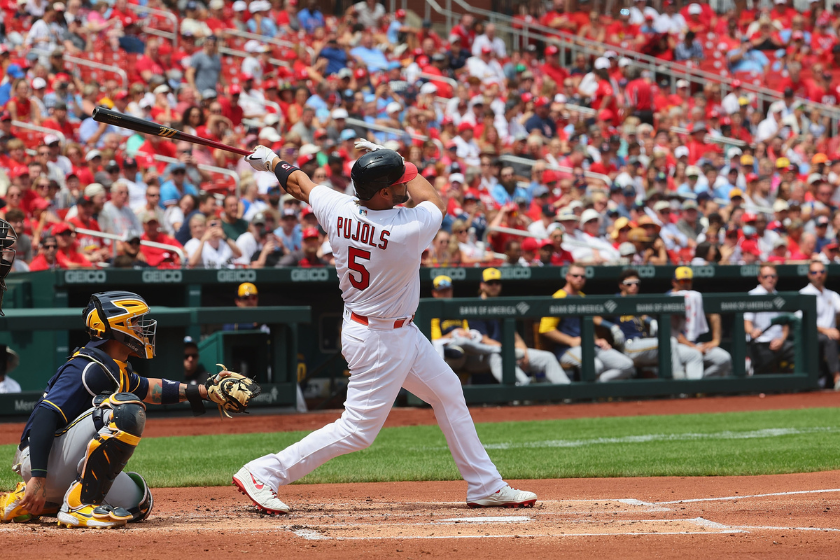 The Cardinals are in the middle of a five-game series with the Chicago Cubs. And they'll have a significant number of their final 41 against the Cincinnati Reds, Washington Nationals, and Pittsburgh Pirates. All four are teams sitting well below .500. However, they will need to face the Milwaukee Brewers, Atlanta Braves, Los Angeles Dodgers, and San Diego Padres, too. All four are either leading their divisions or fighting for the division or Wild Card spot.

At bats against the potential postseason teams will likely prove to be more difficult. Meanwhile, if he gets more at-bats against lefty Drew Smyly and others in the sub .500 teams, the chances of getting to the 700 club increase.

No pitcher wants to give up a home run, but you have to wonder if, as we get closer to the end of the season, there may be a couple of meatballs that come down the center of the plate if Pujols is inching closer to being a club member. Unlikely, but you never know. Just one two-homer game could get us all thinking as the season winds down. 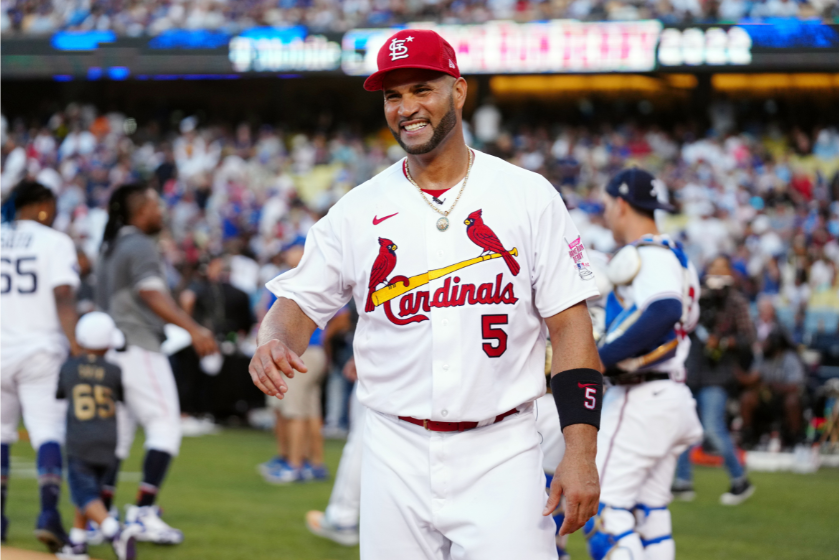 As it stands, Pujols is four homers away from passing former New York Yankee Alex Rodriguez for fourth all-time home run list. The 11-time all-star is certainly one of the best hitters to play the game, but it's the longevity of his career that's most impressive.  After all, 22 years in the league is incredible and also on par with the biggest legend in Cardinals history. If you look across the St. Louis record books, Stan Musial is the leader in home runs, RBIs, and total bases as well as over 20 offensive categories. Albert Pujols sits second in nearly as many.

What's even more impressive is that Musial spent 22 years with the Cards, but Pujols has only spent half his career in St. Louis. Five years ago there was a lot of talk as to whether he should hang 'em up. Injuries hit and game time was dwindling, with fewer than 20 home runs and an overall downturn in all offensive stats.

But the will to not give up, and ultimately a road back to St. Louis, seems to have lit a resurgence within the living legend. Whether or not he's able to rise any higher, he still sits fifth in the all-time home run rankings.

Let's Talk About A Storybook Ending 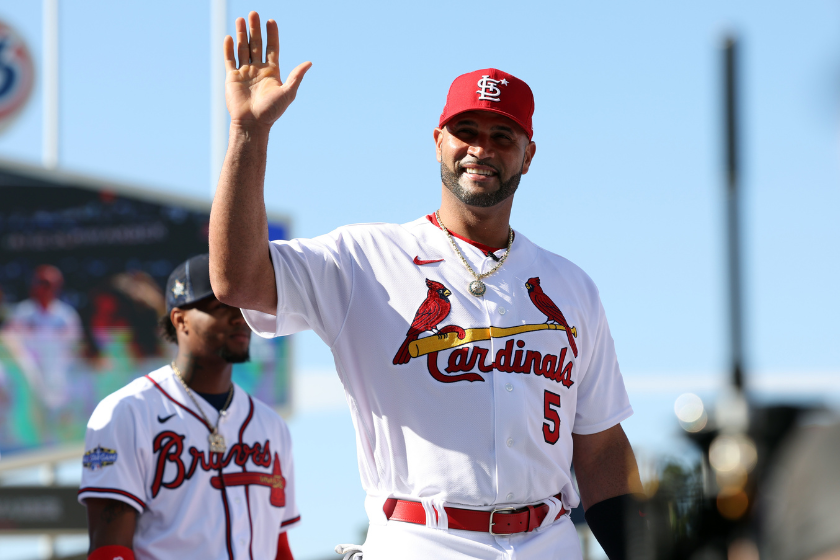 His reputation is spotless; he's completely clean. So think about that. He has spent 22 years playing the game, has faced a handful of injuries and hasn't consistently played in over 140 games since 2017. And yet, he's managed to still be a measure of consistency. In fact, think about how those yearly numbers could have improved if he had the opportunity.

Instead of limping toward the finish line, Albert Pujols is likely to add one more postseason to his resume. He's on the cusp of 700 and already a top-five home run hitter of all time. The best way for his book to close would be hitting 700, going toe-to-toe with the likes of the Dodgers or Mets, getting to baseballs biggest show, and completing his third career World Series victory.

Unmatched and One of a Kind 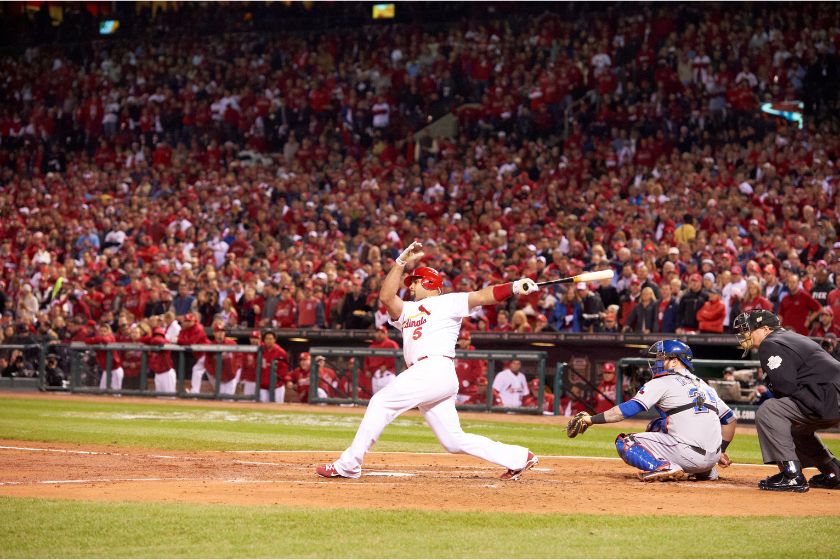 It's unlikely we're going to see another player like Albert Pujols for a very long time. To start, his longevity isn't something we see a whole lot of. With the speed and aggression with which players play the game today, future players who hit the 20-year mark are likely to be very few and far between. In fact, only about 10% of MLB players even pass the 10-year mark. The average career in the majors lasts just shy of three years. And sure, it's likely that his time with the Angels playing DH helped to extend his career, but even then it's an incredible feat that he's been able to get to where he is.

The last player so universally loved for so long was probably Ken Griffey, Jr. Sure, we've got the likes of Mike Trout now, but injuries seem likely to hinder another 11 years of him in the game.

Needless to say, Pujols is going down as one of the greatest, kindest, and model players ever to play the game. Whether he makes it to 700 or not, we all will be raising a glass to the greatest career we're likely to see for years to come.